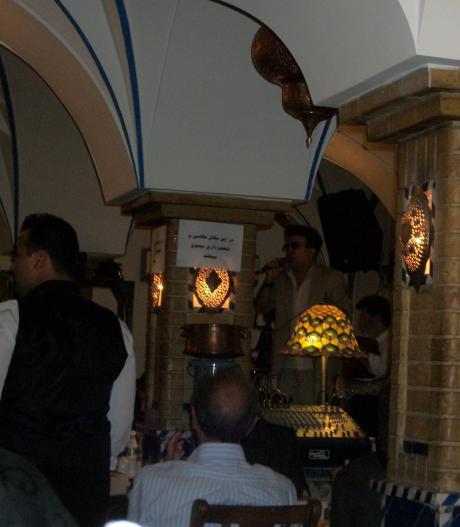 This year I was able to visit some restaurants that had live entertainment and I think the best one was Daloon Deraz restaurant in the heart of Tehran right in front of the Tehran Heart Center in North Karegar street.  It was also the more expensive of these restaurants but considering they had 4 singers and one of them very famous, I think it was worthed.

They have dinner salad buffet that has salads and sours and pasta salads as well as some ice cream and deserts.  Then you order from a menu that has steaks and kabobs mostly.  I had tongue with fried onions and saute potato and their “special house sauce” which was mustard!  It was pretty good.  With the mandatory 18% gratuity and additional pay the boys gratuity it ended up about 55,000 Toman or about $32 per person.

An interesting and funny part was that after you had your dinner and salads they’d bring a big ass fruit tray!  As if Iranians don’t put enough mountains of fruits in front of their guests in their homes, here they were doing the same thing!  Who can eat so much fruit after such a big meal?!  This mountain of fruit part is a punch line of jokes for many Iranian-American comedians in US!

The singer in the blog picture is the famous Saeed and his famous tow mesl goli (you’re like a flower) and when the host introduced him he said they’re proud to have launched the career of many singers and this particular one who went on to sing in Dubai and other countries.  He first sang tow mesl goli in Daloon Deraz!  Personally I have a lot of memories from this song so I was pleasantly surprised to see him there and as he started the faster rhytym I wanted to get up and dance!

It is very cruel to Iranians to go to these places, have dance music and be prohibited from dancing!  It gives another dimension to putting the meat in front of the cat metaphor!  So instead people tend to do the wave in their own tables and dancing while sitting!  Or as the old i.com cartoonist hajiagha would say Seating on your ass and dancing!

They had 3 other singers but none as good.  Every now and then some customers from the audience would give some money to their waiter and he’d go to the stage and shower the singer with 1000 or 2000 Toman bills.  Seemed gay but they did it.  Last year I paid some tips on a tip box next to the stage but not like this, which is called shabash but it’s stupid because shabash is for weddings!

As the name entails in Farsi, Daloon Deraz has a long hallway and as real estate is expensive (or as Hajiagha would say expainsive!) the stage is in the middle and not good for viewing.  For a better viewing of the stage see this picture that someone had taken closer by during his trip and it’s more clear.

Also because of space shortage not much attention is given to the bathrooms so women go through men’s room in a smaller hallway before getting to women’s room.  So the men’s room is very narrow, too narrow for urinals! So much so that while I was doing my business standing up, someone opened the door and jammed me to the urinal!  WTF!?

It was a good night and these places are really popular and get sold out quickly.  They also have it every night and as Tehran is a big populated city with a youthful population they flock to these places every night.  Good to be with them one night and have fun alongside.

The host would go on stage between acts and would give some instructions, such as don’t take pictures (my picture has the no photo sign in it!), observe hijab and most important watch your freaking kids and don’t let them run around!  Seriously they’d serve tea round the clock.  Good persian tea on big, huge samavors and a waiter dedicated to serving it.

The tea waiter had an act all his own.  He’d have about 15 – 20 tea in his round tray and would walk fast in the narrow hall and swinging and turning with the tray about his head something between a pizza maker tossing dough in the air and a belly dancer moving around!  All night long I was thinking someone is going to run into him (they ran into me in the urinal!!) and he is going to burn someone, especially these little rascals running around.  I thought small kids didn’t belong here, certainly not good running around.  Just about in all restaurants the hosts would complain about kids running around!

I may blog about another unique restaurant in another blog but these scenes at night are very memorable.  This one in particular and with Saeed singing it was like a really nice cozy private concert!