Why the David-Against-Goliath story never goes out of a minds? Is Nadal loss biggest in tennis history? 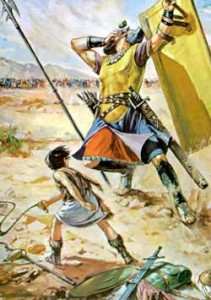 Back in the centre court but my mind is somewhere else.I am thinking of ‘Why the David-Against-Goliath story never goes Out of a Style?’ Is Nadal loss biggest in tennis history? A back test of my theory and it looks like I was wrong, if number 100 could beat number 2!

Rosol sneaked into Wimbledon somehow this year, won the first round, and now, he has conquered the Everest. This was a clash of David and Goliath; he brought the whole arena down. Nadal is on the list of all time great, Lori McNeil over Steffi Graf is another occasion and Australian Peter Doohan over two-time defending champ Boris Becker at Wimbledon. Nothing was as big as this one. George Bastl once beat Pete Sampras at Wimbledon some years ago. That was a huge but not as big Sampras was anyway on the way down; Nadal has just won the French Open two weeks ago. Rosol’s first-round win over Ivan Dodig was his first victory at Wimbledon. Rosol has never won a match in the main draw at either the Australian Open or the US Open.

Tennis is a mental game, and Nadal, Federer and Djokovic have the other players psyched out. More often than not when the opponent walks onto the court the match is lost in mind. “I didn’t feel anything,’’ Rosol said. “I was in a trance a little bit. . . I was somewhere else.’’No one expects a David to beat the proverbial Goliath.

It has to be a trance; you have to be somewhere else to beat. The Miracle on Ice is the comparable in my opinon- the United States hockey team’s victory over the Soviet Union in the semifinals of the 1980 Winter Olympics. The odds were against the Americans in so many ways. They were a group of untested college and amateur players in a culture that was hardly hockey-centric, and they entered the 1980 Games as the seventh seed amongst 12 teams. The Soviets, meanwhile, were essentially full-time hockey players who had played together for years, and they were representing a country which had produced eight of the last nine gold medalists in the sport. The two countries were rivals in every sense of the word, with the political differences between them serving to further the meeting between the two teams on the ice. And to top it all off, the USSR and USA had already played each other in 1980, with the Americans suffering a 10-3 thrashing in a February exhibition match. If they played 100 times, the Soviet Union probably would have won 99 times. But they only played once, and on that day, the United States was the better team, winning 4-3 in what Sports Illustrated has called the greatest sporting moment of the 20th century.

On technology front recently when when an accomplished mathematician surfaces to challenge Google, an avalanche of stories appears in media properties ranging from The New York Times to Search Engine Land. In fact, the Computerworld story led with: “A David has just arose to take on the Goliath that is Google: Wolfram|Alpha, a search engine which serves up formatted answers to questions rather than provide just a list of links.” With trance effort can trump ability … because relentless effort is in fact something rarer than the ability to engage in some finely tuned act of motor coordination.

This is how Rosol won: He outsmarted Nadal with dazzling stroke and strategy. Genius visited him yesterday; he had nothing to lose but win ultimate honour. But Nadal is one of the greatest players of all time, and was playing hot. Rosol is ranked No. 100. His career-high ranking is 65, which he achieved in August last year after reaching the quarter-finals of a Challenger tournament in San Marino.

Lukas Rosol the 26-year-old hails from Brno, the Czech Republic’s second largest city. He is world number 100, Lukas Rosol defeated two-time Wimbledon champion Rafael Nadal 6-7 (9-11) 6-4 6-4 2-6 6-4 in an extraordinary bout under the centre court roof. This is the only time the Czech has played in the main draw after losing in the first round of qualifying in each of the last five years. I doubt he will ever be a consistent performer. Jimmy Connorstwitted: “In tennis we call Rosol a stopper, he won’t win or even go deep in tournament but he will stop a top seed from advancing.” But what a stopper he is, congratulations Mr David, you won it square and fair against the goliath.