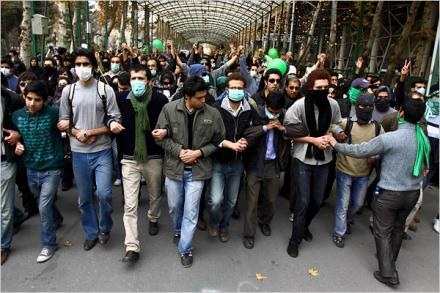 Read the full piece on http://brucebahmani.blogspot.com/2012/07/irans-gre…

3 years ago over the last couple weeks in June 2009 during the controversial Iranian Presidential election, a series of street protests became known throughout the world as Iran’s Green Movement. The supporters of Mir-Hossein Moussavi, felt that the election had been stolen, and that their candidate had won.

Within days of the fraudulent electoral proceedings, vote count, and reporting irregularities, the government initially stalled and then increased its violent response to the protests in the streets of cities throughout Iran in confrontation with security forces. The protests were eventually brutally put down and seen throughout the internet.

One of the most famous incidents was the shooting death of Neda Agha Soltan a bystander, whose face soon became the personification of the brutality of the Iranian government’s reprisals and reaction to the Green Movement.

Ahmad Batebi, is an Iranian human rights activist and former political prisoner, now living in exile in the US, and actively follows and reports on daily events inside Iran as a journalist, and blogger.

Batebi himself was in a similar position, during the July 1999 Student protests in Tehran, and his now famous image holding a bloody shirt of a fallen fellow student who was shot by government forces, was captured in a photograph and put on the cover of The Economist magazine, instantly catapulting him and the cause of the Iranian freedom movement to the international stage. I spoke to him about the 3rd Anniversary and the future of the Green Movement.

“What many outside of Iran failed to grasp about the Green Movement was that it was not so much a movement with proper organization, leadership, goals and objectives, as more of an emotional reaction of outrage at the Government’s audacity in trying to sell a fraudulent election result to people who felt their candidate [Moussavi] had won.” Batebi said.

When asked about the current state of the movement, Batebi explained,

“The movement has definitely been knocked down, but not knocked out. Because of the brutal response and Moussavi’s arrest, the movement has decided to shift its focus on efforts that have little or no personal risk. The government has managed to just about fully silence any slightest objection or tiniest gathering in the streets or homes or anywhere. But pressure is building.”

Next year in 2013 Ahmadinejad will complete his limit of 2 terms. The upcoming election of a new President in 2013, and the likelihood that the government may once again stage the results, has given many outside of Iran pause to wonder if this might not trigger the Green movement to resurface, and another chance to regroup, and become the reform and resistance movement similar to the Arab Spring, that it has often been compared to. With Moussavi and Karroubi including many of their family safely under house arrest for sedition, another uprising similar to 2009 is highly unlikely.

Masoud Safiri, is a Senior Iran Media Analyst and expert on internal Iranian political affairs, has been watching the conditions inside Iran carefully, offered his analysis by saying,

“The green movement was more of a regional reaction, limited to mostly Tehran, and not a national movement like we saw in the Arab Spring. The largely middle class youth reacted more to the players, Moussavi/Karroubi, and when those players were removed by the government, the movement died.”

Safiri went on to say,

“After 2009, Iranians have pretty much given up putting any hope in elections. People simply go through the motions and only vote just to avoid getting into trouble for not voting. What 2009 proved is that government reform through civic participation is impossible. This combined with the US sanctions, and the internal anger at the risks the government is taking with its nuclear ambitions, has ratcheted up overall pressure on Iranians to the point that predicting what they will do is impossible. There are too many pressures from too many sides.”

No one inside or outside Iran is able to predict what will happen in June 2013 when once again, the Supreme Leader Ali Khamenei announces his 2 choices for the finalists, for the Iranian people to choose from as their next President.

Khamenei is a master strategist and has clearly learned from 2009. He will not allow the same thing to happen in 2013. Khamenei has been dissatisfied with Ahmadinejad’s record, his international ridicule, and most recently, his insolence and disloyalty. His realization that Iran needs a more acceptable candidate has led many to predict that 2013 will yield a more suitable president.

Safiri predicts that, “There are several well suited candidates, such as Saeed Jalili, Iran’s well respected current senior nuclear negotiator. Another likely candidate is Ali Akbar Salehi, who speaks perfect English and has a PhD from MIT. The effort appears to be in selecting candidates who not only have completely clean and unquestionable records, and are not politically, morally, or financially corrupt, but who can also get along with the Supreme Leader, the IRGC, as well as gain the respect of the West.”

Given that the Iranian President has little or no power outside of recommending ministry positions for consideration by the Majlis (Senate) and is a largely day-to-day administrative position, the efforts being made to select good candidates, shows the effect 2009 had, and that Khamenei would like to have someone less controversial, more reliable, and more compatible in the role.

Safiri ‘s analysis further suggests that regardless of the 2013 election and the current status of the Green Movement, Iranians are now learning about what they want out of their governance systems and what government can do.

“5 out of 10 books published in Iran today are about political philosophy. Plato, Ptolemy, Socrates, to Rousseau, Descartes, and Karl Popper. Private non University classes in Western philosophy have popped up, and people have understood that they need to learn how to organize their society.”

Safiri stated that, “Iran is not like Iraq or the Arab countries who have recently gained independence. Iran is unique, and requires a unique solution. Not having an embassy in Iran is the biggest hindrance to the US understanding today’s Iran, its evolving people, and more importantly what their needs and aspirations are, in order to formulate an effective policy.”

While the Green movement of 2009 appears to be relegated to history, there is unmistakable pressure being placed on Iranians these days. When the pressure will finally boil over into action or reaction, is anyone’s guess. So far the government has been able to maintain control with rhetoric and calls for patriotism and nationalistic sacrifice, policy changes, injections of cash, raises for government workers, and social welfare programs, and when needed, brutal lightning fast paramilitary force to quell the slightest objections before they get out of hand.

While US sanctions are increasing the pressure on Iran, with Iran’s largest oil importers China and India each with long term contracts, surprisingly excluded from the list of countries participating in the sanctions, Iran has been largely unaffected by the Western boycott of Iranian oil, finding ways to skirt the export rules and shipping regulations at will. Using them as another excuse and rallying point to temper the people’s growing complaints.