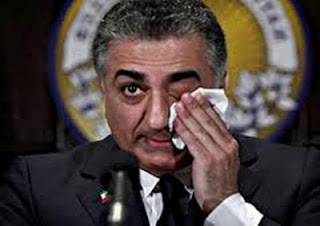 “On June 7th, 2012, Reza Pahlavi gave an interview with the well-respected German weekly magazine, OnLine Focus.(1) A Persian translation was published soon after(2). After this, his office published a statement in Persian which said that there were numerous mistakes in the interview, which it had asked Focus Online to correct.(3) I had, in this time, published a short critical comment about the article.(4) However, after reading the Pahlavi office’s statement, in order to be sure that the translation from German into Persian was correct, I sent both to an Iranian lawyer at the Max Plank Institute in Germany. He wrote back: ‘I read both, and the German-to-Persian translation is correct and exact.’ He then wrote, ‘with regard to Reza Pahlavi, the truth is that when I read the German text, I felt sick. My annoyance and anger at such a low and contemptible political act, which clearly reveals the backwardness of [Reza Pahlavi’s] mind, were so severe that I did not know what to do. I thought to leave a very critical comment (on Focus Online), but I realized that the interviewer knew what she was doing and, in fact, that using the best of methods she had revealed his empty, raw and childlike mind, which is at the same time is filled with meaningless arrogance.”
The cause of his anger was Reza Pahlavi’s declaration that he was the legal king of Iran, and that he can’t wait to sit on the throne. Also, in order to justify his father’s dictatorial rule, he argued that Iranians had not been ready for democracy and that, in effect, they did not deserve it. He suggested that his father had to train them, even saying that ‘some [former] revolutionaries are coming to me and saying that it would have been better if my father had arrested or executed them.’ He also praised the policy towards Iran of the despots of Saudi Arabi, Qatar and Bahrain, and placed himself importantly next to Gandhi and Nelson Mandela.
As far as I know, it was Mohammad Amini who wrote the first solid critique of this interview. After its publication he came under a barrage of criticism from monarchists who argued that the interviewer has misrepresented the views of Reza Pahlavi. They referred to a letter written by his office to Focus Online, which argues, ‘we need to mention that there are numerous mistakes in its translation from English into German and then into Persian, and that in this text the German-to-Persian translation is not compatible with the language of Reza Pahlavi. […] We request that Focus Online respects the media regulations and publishes the English version of the interview and corrects its German translation as soon as possible.’
Mohammad Amini contacted Focus Online to ask about their view of this statement. He was told that, first, they have not received any request from Reza Pahlavi’s office, and second, that the interview was recorded and that the record is at their disposal.(5)
It is thus safe to assume that the sole purpose of the Pahlavi office’s statement is to deceive Iranians. Why? Because if the office really believed that the magazine did not accurately represent his views, they should have sent a statement to the magazine citing the parts which were misrepresented, rather than issuing a letter of protest in Persian without making the magazine aware. This is deeply unethical on two fronts. First, they have tried to deceive Iranians by making them believe that the letter was sent to the magazine. Second, they have accused the magazine of being dishonest, or at least, of lacking professional ethics, without giving it an opportunity to reply.
The mere fact that the Pahlavi office did not contact the magazine to register their concern suggests that Focus Online had actually conveyed what Reza Pahlavi had said. In fact, the interview was a brilliant piece of journalism by the skilful Andrea-Claudia Hoffmann, who knows the psychology of power-seeking people. As a result, Reza Pahlavi let his guard down and expressed his true self, which is always hidden behind the mask of someone who struggles for freedom and democracy. In other words, he was caught red-handed. He then panicked and, as damage limitation, issued a vague statement in Persian saying that his views were misrepresented.
After posting the Persian version of this post, Siamak Zand wrote, ‘as a journalist who worked at the Shah’s press office for the last seven years of his reign, resorting to such lies and deceit was the norm rather than an exception.’
I argued that if Reza Pahlavi believed my arguments were wrong, it would be easy to prove them so by releasing the interview recording or asking Focus Online to publish it.”

However, after more than a month’s silence, he has stated in an interview that his associates contacted the magazine requesting a copy of the interview, that the magazine declined, and that he is thus taking the magazine to court to begin a legal process.(6)
There are a number of things that should be noted in this regard.
First, Mr Reza Pahlavi is well aware that one of the main tasks of the press office which he has at his disposal is to record and archive any interview he gives, so that it could be referred to in times like this. I am therefore requesting that he asks his press office to release the record if, for inexplicable reasons, the German magazine refuses to do so. Why, instead of doing that, does he want to assume the hefty financial burden that will be necessary for legal action?
Could he release the letter that his office wrote to Focus Online, in which he asks the magazine to release the record of the interview? If not, why not?
Why has the letter written to Focus Online not been translated from Persian into either English or German?
What is the nature of the case upon which his lawyer is taking the magazine to court? Is it defamation, libel or something else?
Could he release the legal letter which was written by his German lawyer? If not, why not?
To which German court has he applied? Releasing this information would enable us to learn more about the nature of the complaint itself. If he is unwilling to supply us with this information, why is this so?
More than 40 days after the interview, Mr Pahlavi has still not explained which part of interview was falsified or misrepresented. In another interview last week, he said that he did not remember being asked if he wished to be crowned, which legally speaking is not a denial that he had been asked such a question. What is the reason for such a slow response, and such vagueness?
Finally, I would like to argue that the reason Mr Pahlavi is so slow to respond and vague about the interview is that he realises he has said all these things and is now discussing legal action in order to buy time. Why? He knows well that it can take months, if not years, for such cases to go to court (if he really has taken the magazine to court) and has calculated that with such longevity the whole issue will be forgotten. I have to inform him that he could not be more wrong. The life expectancy of lie is very short when it burns with the oxygen of freedom.
Again, I ask Mr Reza Pahlavi to release the letters, and to release the recording of the interview. If he has nothing to hide, he should have volunteered this information himself. We are still waiting.
(1): http://www.focus.de/politik/ausland/krise-in-der-a…
(2): http://www.irandarjahan.net/%D8%B3%DB%8C%D8%A7%D8%…
(3): [1] http://www.rezapahlavi.org/details_article.php?per…
(4): http://iranian.com/main/blog/mahmood-delkhaste…
(5): http://news.gooya.com/politics/archives/2012/06/14…
(6): http://www.youtube.com/watch?v=ockU8QVvwEg&feature…