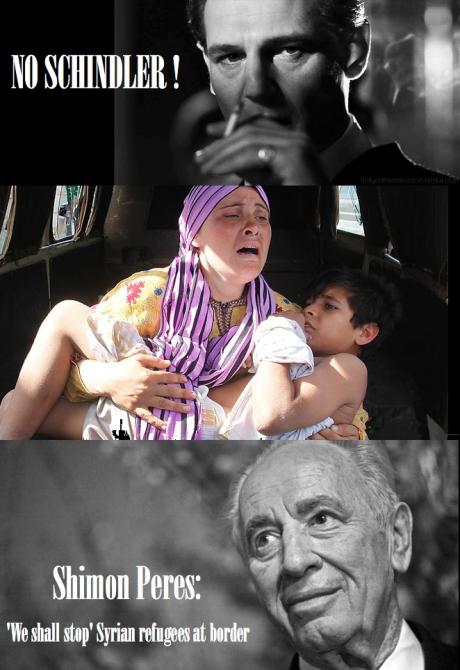 In an interview with CNN, Israeli President Shimon Peres said that if Syrian refugees were to arrive at the Israeli borders, they would be stopped from penetrating the country. Realizing that the answer to CNN’s journalist query was sort of awkward he clumsily tried to correct the disastrous effect of his response by claiming to date no Syrian refugee has demanded to enter Israeli territory but if on the otherhand Syrian forces were to cross the border they would naturally be stopped.

and who in addition as a Jew,perfectly knows, the roots of the Nazi extermination and concentration camps, which caused the systematic deaths of more than 6 Million men, women and children , one can legitimately question the sanity of Israel’s First public figure.

It happens that Peres immigrated from Poland with his parents to Palestine in 1932 and therefore was never personally held in a concentration camp but most of his own relatives who remained in Poland were slaughtered during the Holocaust.

Mr. President your lack of compassion makes you undeserving of the Nobel Peace Prize  or maybe given what a useless prize it has become you fully deserve it

ETERNAL SHAME ON YOU SHIMON !

An Un Apologetic Iranian Constitutional Monarchist from the Land of Cyrus, Darius, Xerxes and Esther !

Peres: ‘we shall stop’ Syrian refugees at border :

Israeli Pres. Shimon Peres says Iran is in “open war” with his country and Israel is ready to seize Syrian weapons but adds ‘we shall stop’ Syrian refugees at border.

Latest Horrors from the Syrian ‘Front’ :

Jan Karski (24 April 1914 – 13 July 2000) was a Polish World War II resistance movement fighter and later professor atGeorgetown University. In 1942 and 1943 Karski reported to the Polish government in exile and the Western Allies on the situation in German-occupied Poland, especially the destruction of the Warsaw Ghetto, and the secretive Nazi extermination camps. (More Here)

Polish Refugees Arrive in Iran (Persia) during WWII after their exode from Poland invaded by Nazi Germany. Amongst them were also Jews and Gypsies who were threatened by the Nazi Purification policy.

SCHINDLER’s LIST : In Tribute to the Abandoned Children of Syria

DON’T BE A DUMB BASTARD: Patton  advises Israelis in conflict with Syria’s proxies to topple Assad