The kicking off the Games? “Some neck. Some chicken!” 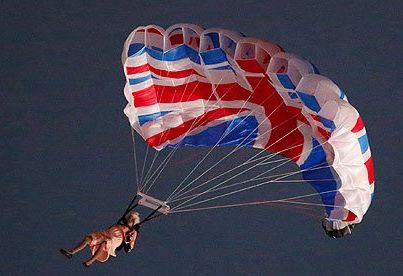 I am easily satisfied with the very best. Churchill

Danny Boyles ‘Isles of Wonder’ show at the Olympic Stadium cost £27million and involved a cast of 7500 – mostly volunteers. It was an trailer for UK plc, inestimable in front of a universal TV  audience of four billion. London, the self-appointed greatest city on Earth, lived up to its assertions to present a riveting show to mark the third Olympics it has hosted since 1908. A three-and-a-half-hour melodic and melodramatic musical that even the rain could not have ruined.

It was not in a distant past that ‘The Duke of Edinburgh’ has described Olympic Games’ opening and closing ceremonies as “bloody nuisances” and called for them to be banned.

Opening and closing ceremonies destroy the spirit of the games; it is about competition and not extravaganza. “They ought to be banned. They are a pain in the neck,” he added. The Duke also said that he hoped to do “as little as possible” during the 2012 Olympics in London by which time he will be 91 years old.

In an article in 2006 I wrote: ‘Shivers goes down my spine as I think if Londoners follow his suggestions! I think Olympics are neither about competition nor festivity; it is about the ‘struggle’ to weave a global culture as we nurture. The Olympic Creed reads: “The most important thing in the Olympic Games is not to win but to take part, just as the most important thing in life is not the triumph but the struggle. The essential thing is not to have conquered but to have fought well.”

The world at large is hungry for occasions of state and shows of global peace that may show that we humans are one race and can celebrate. Times when we see growing divisions within civilization as a result of campaigns of abhorrence, occasions of global pomp aimed towards unity of mankind are great displays. Olympic opening and closing shows are just the kind of grand exhibitions of great coming together of man. Athens 2004 and Barcelona 1992 were the ceremonies that put new standards without doubt.’

The Beijing Olympics have launched a global search campaign for ideas that would make the opening and closing ceremonies of the 2008 Games a spectacular and inspiring event. Organizers say they are looking for creative concepts that could turn the opening and closing ceremonies of the Beijing games, which are to emphasize technology, the environment and peace, into ‘wonders’. The Opening ceremony on Beijing has a theme, to promote cultural development, and construct a socialist, spiritual civilization. The Olympic tenet of “Faster, Higher and Stronger” not only inspires athletes but also reflects the concept of advanced cultures. I pray that London develops a similar theme and will play its role aptly to do justice with the opening and closing ceremonies that befit the greatest show on the earth in the greatest cities of the earth.”

The question being raised was will Danny Boyles ‘Isles of Wonder’  better and top China’s £64m spectacular extravaganza. China immense gala looked an insurmountable challenge to trounce. It was for Danny Boyle a huge challenge. There was no chance that anyone could face up to the drama of Beijing on scale of achievement the task was akin to possibility of Britain winning against the unstoppable Germans seemed so tiny, that a French military leader predicted that Britain was going to have her “neck wrung like a chicken.” Churchill remarked: “Some neck. Some chicken!” Oscar-winning director Danny Boyle said he had felt liberated rather than daunted by Beijing 2008′s spectacular opening ceremony as his quirky but impressive show opened the London Games in style.

He was unpretentious in his great victory last night. The director had the hardest job in show business. Danny Boyles ‘Isles of Wonder’ show at the Olympic Stadium cost £27million and involved a cast of 7500 – mostly volunteers. The “Slumdog Millionaire” director said it was impossible to do anything bigger than the show in Beijing, which stunned the world with its sheer scale. “Beijing, in a way, was something that was great to follow,” he said. “Up to Beijing you could look back and there’s clearly an escalation. The shows get bigger and bigger and bigger, and you can’t get bigger than Beijing. “So that, in a way, kind of liberated us. We thought: ‘Great. OK. Good.

Boyle work on a relative shoestring budget; most of his films come in under $20m. The Beijing opening ceremony cost an estimated £64m; Boyle has £27m at his disposal. Beijing was fabulous, sure, but its show had a kind of post-communist solid authoritative sense about it.

Boyle, brought compassion and enthusiasm to his show. His ceremonial rite reflected the Britain that is: broad, compassionate, vigorous, optimistic and gently determined.  Danny supports Manchester United, loves the Tour de France and plays tennis, yet Boyle is no sports geek. His dexterity in depicting  an adaptation to the world via the camera lens of a Britain that is comfortable with its own self was highly triumphant.

Thank You ‘Sir’ Danny Boyle. You have earned a knighthood last night !