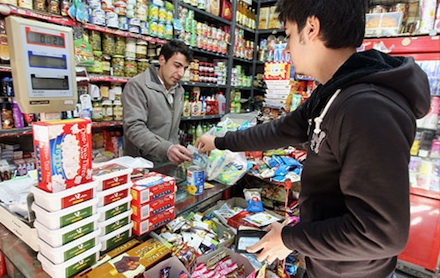 Last month, a young American woman was blocked from purchasing an Apple product at a local store in Alpharetta, Georgia. After overhearing her speaking Farsi, the second generation Iranian-American was informed that selling the product to her went against the company’s policy. Apple’s export compliance policy states that direct or indirect sales of Apple goods to any embargoed country are prohibited, apparently categorizing domestic sales to Iranian-Americans as an indirect channel of distribution — but such policies are essentially unenforceable. Current embargoed countries include Cuba, Iran, North Korea, Sudan and Syria. By such logic, corporations would turn away any consumers who are Cuban-American, Syrian-American — you get the idea.

Although the Apple store incident could be minimized and considered a misinterpretation of Apple’s policy by an individual location or clerk, the incident is just the newest in a series of unfortunate misapplications and misinterpretations of sanctions legislations towards Iranians and Iranian-Americans, many of which have had stronger implications against the inherent freedom of intellectual engagement.

In 2003, Iranian scholars, scientists and writers faced discrimination when the Office of Foreign Assets Control’s (OFAC) imposed a ruling of the Berman Amendment that prohibited U.S. publishers from engaging in any publishing activity with an author from a sanctioned country without first applying for a special license. This broad interpretation of sanction legislation directly affected a sensitive demographic; those authors, scientists and activists who were already victims of oppression from their native governments and sought to expand their freedoms under the protection of U.S. policy.

Nobel Prize Laureate Shirin Ebadi, honored for her work on human rights and free speech in Iran, was one of the first writers to be affected. Ebadi criticized the regulations as contrary to the free exchange of ideas claimed to be valued by the U.S., as it hindered her ability to work with a U.S. literary agent on a book proposal. The Institute of Electrical and Electronic Engineers (IEEE) and the American Chemical Society (ACS) were two professional societies affected by the OFAC regulations, reluctantly forced to temporarily revoke membership and deny publication benefits to their Iranian scientists.

The Association of American University Presses and co-plaintiffs filed a suit against OFAC in 2004 arguing that its interpretative ruling of the Berman Amendment was illegal as it violated the First Amendment right to select, process and publish information without restriction. The plaintiffs successfully resolved the lawsuit three years later, only after OFAC revised the regulations and eliminated the need for prior licensing.

Impacts of sanction legislation, however, are not limited to the scope of property and information. With the Iranian economy deteriorating under the ever increasing sanctions, Iranian students studying or having the aspiration to study abroad are shouldering the burden of sanctions as they are often unable to access currency, transfer funds or afford tuition due to spiraling inflation. Despite encouraging statements by Secretary of State Hillary Clinton urging Iranian students to attend American universities, the sanction restrictions that ban transactions between Iranian banks and U.S. financial institutions prohibit students from making direct payments to educational institutions, encouraging black market growth as students are forced to solicit brokers to bypass sanctions laws.

Even the recent initiative taken by the Obama Administration to allow multiple entry visa options for Iranian students has incurred problems from its own policy restrictions. Outside of the financial burden and risk attributed to returning to Iran to reapply for a visa, this new policy limits issuance of multiple entry visas to those in the non-sensitive, non-technical fields of study and research. Considering the ban imposed by the regime forbidding students from taking social science and humanity courses at domestic universities in Iran, this policy restriction creates additional obstacles for student exchange. According to a recent survey, out of a sample of 148 successful student visa applications issued to Iranian students between July and December 2011, only20 percent were issued as multiple entry visas.

While these sanctions are currently preferred to more severe alternatives in dealing with Iran’s nuclear program dilemma, these so-called “smart sanctions” are increasingly violating the basic human rights and inherent freedoms of the Iranian people. The sanctions and resulting regulations that restrict the free flow of information and ideas are contradictory to the authors’ intended goals of protecting American security. As the promotion of democracy coincides directly with a population’s ability to freely access information and facilitate meaningful exchanges, policy makers must be careful that sanction legislation is not so broad or undefined that it becomes self-defeating and prohibits the very freedoms it serves to protect.