How Syria ended up to be Iran’s strategic ally? 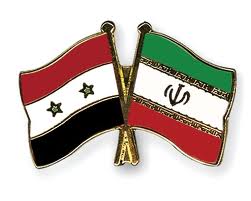 At work, we have a Philippine man who works as janitor, A nice and funny guy. He is around my age and is here on work visa. Every morning he stops by my desk to do his daily routine he would say some thing on ME politics and the word of the day has been Syria for past few weeks. Later on in the morning, on my way to washroom, I catch him in his office(janitorial room) reading his bible, which explains why he is interested so much on ME issues!! He finds no one closer than me to share his Philippine passions about the land of all religion!! He reads his bible to me and I listen to him!!

This morning, he asked me, if I know what western medias say about the relationship between Iran and Syria? ‘ they are strange bedfellows’ and I quote!!

I clicked right way!! he was referring  to two absolutely different political systems in Iran and Syria. Seriously, what a secular pan-arabist party  created by Michel Aflag has to do with conservative shia theocracy in Iran?? and what was the name of Sadam’s party?

I wont go detail into history as it is widely available to read some where else, but I have to mention the Baath party movment started around the same time in both Iraq and Syria.  In Syria, Hafez Assad, a military man who also happened to be Alavi took the power and became the boss. In baathe party’s ideology, which was written by Aflag a christian, religion did not matter!!! wrong!!

It is also important to know, Alavis dont go to Mosque and dont pray. They reason because Imam Ali got killed in a Mousqe while praying therfore they must not do that!! as odd as it is!!

Imam Mousa Sadr was the only high ranking shia cleric who called alavis Muslims-sorry I go through the names and matters so fast, but if you are lost and dont know what I m talking about, please keep reading you will get an answer to the above question too!!

A little bit of rivalry with his “bedfellow’ Sadam and the impact of that Fatva, which I must say again no one else has not endorsed it, put Syria and Assad in the Iranian zone since.

well, I m thinking how to explain this to my Philippine buddy??  hooommmm!!! because….. Iran and Syria have very close cuisines and similar ways of cooking and baking!! he loves chelo kabab!!!Assad loves chelo kabab too!!so do Ahmadenejad and khomeni………

hey,now, dont tell any body u like chelo kabab!! u could lose your visa!!you, Khomeni and Assad have same thing in common!!

let’s see how many more Philippines with vast knowledge of ME we can find here??

PrevPreviousاِهن و تُلپ ایرانیان
NextTorture or training? Inside the brutal Chinese gymnasium where the country’s future Olympic stars are beaten into shapeNext