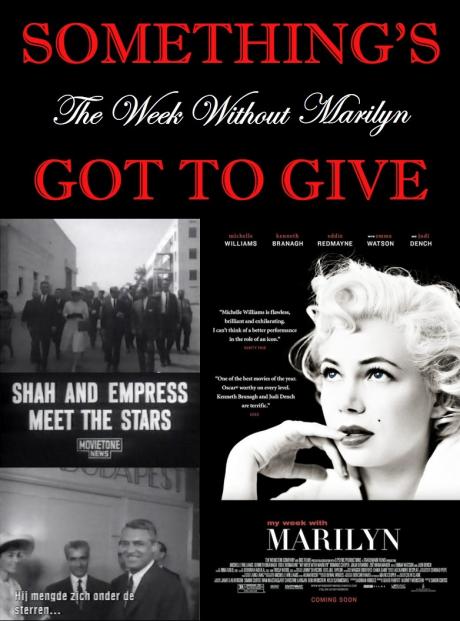 50 years ago today, Marilyn Monroe was found dead in her Los Angeles home. She was to star in George Cuckor’s unfinished film Something’s Got to Give (1962).

Although known for her delays on set her absence during a tour by the Shah and Shahbanou of the 20th Century Fox Studios did not go unnoticed.

The Persian Monarchs who had just visited President Kennedy on their first state visit to the United States in years were to spend some time visiting the US and being exposed to the « American Way of Life » with visits which included Disneyland, NASA’s Cap Canaveral, The World Fair in New York City and  the Hollywood Studios amongst others.

Little did they or the Studio executives suspect that the great Hollywood star’s absence was due to a far more tragic reason. Marilyn Monroe died from a drug overdose on August 5th, 1962 and entered film legend as an iconic movie star of her generation.(Source: persianrealm.com)

Something’s got to give 1990 documentary:


In 1990, this 45-minute documentary was made about Something’s got to give, the last and unfinished movie of Marilyn Monroe. It shows footage of a new reel of Iran’s Royal Couple visiting 20th Century Studios in Hollywood. They get to meet George Cukor,Cary grant, Ronald Reagan, and get to watch the shooting of a scene with Cyd Charisse and Steve Allen on the Set of Marylin Monroe’s Film. A Studio executive explains how Monroe was absent on that day and hesitated to be presented to the Shah and Shahbanou because she was wary of the fact that as leaders of a Muslim country they may be against the State of Israel. The executive (clearly jewish himself) manages to convince her of the contrary to meet the Royal couple later.

A Special thanks to Nazar Kamangar for finding this rare gem and sending it to me ;0)

MY WEEK WITH MARILYN

My Week with Marilyn (2011) directed by Simon Curtis and starring Michelle Williams, Eddie Redmayne and Kenneth Branagh is Based on the True story of Colin Clark, an employee of Sir Laurence Olivier’s, who documents the tense interaction between Olivier and Marilyn Monroe during production of The Prince and the Showgirl.

My Week with Marilyn (Official Trailer):