Usain Bolt and Eric Moussambani: The story of the fastest and the slowest! 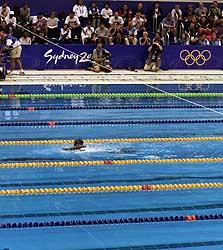 “I’m just going out there all the time to do my thing and show the world I’m probably the best.” Usain Bolt

“I never saw a crowd like that,” he said, “I was a little scared. There is no crowd like that in my country. After 50 metres, I wanted to quit. My arms were tired. But I couldn’t stop. The crowd. Thanks to the crowd, I had the strength to finish. The crowd gave me power.” Eric Moussambani

The Olympic spirit is a miniature copy of what is all good about humanity.; Olympics drive the message home of human development self-measured success, and vigorous harmony. It is not about Gold it is about participation and human love dignity and everything good about humanity. It is definitely about Jesse Owen in 1936, the Hungarian Water Polo team in 1956, and Usain Bolt in 2012. but also about Eric Moussambani, of Equatorial Guinea, who competed alone in the first heat of the men’s 100m freestyle Tuesday, Sept. 19, 2000 at the Sydney International Aquatic Center during the Summer Olympics in Sydney. When 22-year-old Eric Moussambani of Equatorial Guinea, pulled himself out of the pool, the clock read one minute, 52.72 seconds. A minute slower than the qualifiers for the 100m final and 50 seconds slower than the next slowest man in the field. While the other swimmers were outfitted in Fast Skin body suits, Moussambani wore a terrycloth brief, the white draw strings hanging out over the waistband.

Pageantry and pomp bring calm to billions from pains and violence we witness every day. These global events, like next week’s World cup football matches, bring a soothing effect to the chaotic life of more than 5.5 billion people. They are looking for some color and verve in their routine living, and these global events afford them some hope and some serenity. These global arenas and showmanship are the harbinger of greater understanding and unity amongst mankind. Much as the world is impacted by violent forces of nature like Tsunami and Earthquakes telecast right into our living areas, these synthetic non-traditional events bring some joy and happiness to billions of very ordinary folks whose only joy is watching these events.

Olympians are not iceman, they have shown dissent by participation and winning against the overpowering zeal of adversity. Jesse Owen in 1936, sent shivers down watching Hitler spine, he singlehandedly quashed his dreams of hypothetical human supremacy of Aryans race over others. Adolf Hitler had intended the 1936 games to showcase his Aryan ideals and prowess. However, while Hitler did send Owens a commemorative inscribed cabinet photograph of himself, Jesse Owens was never invited to the White House nor were honours bestowed upon him by President Franklin D. Roosevelt (FDR) or his successor Harry S. Truman. The Hungarian Water Polo team in 1956, Jesse Owen participated in the 1936 Summer Olympics in Berlin, Germany, where he achieved international fame by winning four gold medals: one each in the 100 meters, the 200 meters, the long jump, and as part of the4x100 meter relay team. Hitler expressed his true feelings and disgust at Owens.

Albert Speer, Hitler’s architect and later war armaments minister, later recollected: Olympics also help drove a nail in the coffin of bigoted racism: ”Each of the German victories, and there were a surprising number of these, made him happy, but he was highly annoyed by the series of triumphs by the marvellous colored American runner, Jesse Owens. People whose antecedents came from the jungle were primitive, Hitler said with a shrug; their physiques were stronger than those of civilized whites and hence should be excluded from future games.”

One of the hardest-fought contests in Olympic history was a water polo match between Hungary and the USSR in 1956 – a match which came to symbolise the Hungarian struggle against Soviet rule. It was only a matter of weeks since Soviet tanks and troops had rolled into the Hungarian capital Budapest – brutally crushing an anti-Soviet uprising. But at the height of the crackdown, the country’s water polo team had been cut off from the news at a training camp in Czechoslovakia. They only found out the extent of the violence when they finally arrived in Australia. Hundreds of Hungarians had been killed, thousands more arrested. Bloody battle Five players were ordered out of the pool by the referee. But the Hungarians were the better team. By the fourth quarter they were 4-0 ahead. The Australian police had to escort them from the swimming pool. Journalists and photographers crowded round the injured player.

Olympic spirit gives voice to the disenfranchised. The first Aboriginal athlete to compete for Australia, Cathy Freeman ignited the Olympic torch in the main stadium at the 2000 Sydney Games. Ten days later she literally ran for an entire continent when she won the gold in the 400-metre dash. The black power salute in Mexico will live in the memory of Olympians forever. It was the most popular medal ceremony of all time. The photographs of two black American sprinters standing on the medal podium with heads bowed and fists raised at the Mexico City Games in 1968 not only represent one of the most unforgettable moments in Olympic history but a landmark in America’s civil rights movement.

What was in the past the luxury of ‘royalty’ has passed on to a common man. The luxury enjoyed by the very poor like that of ‘iced water’ was a luxury only an Emperor could have demanded. Indian Emperors used to get their ice to sweltering Delhi from the Himalayas. Traditions are great as they demand a lot of labor, a bunch of underclass to perform an act with minimal returns. This underclass today is vanishing and this is the underclass that enjoys the great opening and closing ceremonies in billions, like the World Cup shall be witnessed by 4 billion people, so will the Cricket World Cup. The merrier the openings, the better the sentiments for population at large would be. Why should the daily sick dosage of continual killings be the only legacy of this new age?

The world at large is hungry for occasions of state and shows of global peace that may show that we humans are one race and can celebrate. Times when we see growing divisions within civilization as a result of campaigns of abhorrence, occasions of global pomp aimed towards unity of mankind are great displays. Olympic opening and closing shows are just the kind of grand exhibitions of great coming together of man. Athens 2004 and Barcelona 1992 and London 2012 were the ceremonies that put new standards without doubt.

Bringing all nations together at one point of the globe every four years is a benchmark from which we subconsciously measure how far we have come in making a better world. Some ‘myopic’ people think that Olympic monies should have been spent somewhere else, I ask ‘where else we can display our collective humanity so forcefully.’ These are few occasions when every penny is well spent and humanity comes together, untiring prayers of unity ‘manifested’ in kind . It is these very people who remain unhappy and bitter, they want to see global unity in their colors in their brand and packing. The different shades and colours of mankind are working together to create perfect harmony one day. There is no one strait jacket, single menu or a pack for mankind. Martians seeing this act of ours will observe that ‘this is super peace,’ this is what they will term ‘redemption of mankind’s follies.’

The Olympic spirit is far in the front leading today, as it was in 1896, it has helped create a world identity which no scripture or religion could. Human beings are fittingly becoming ever more included.