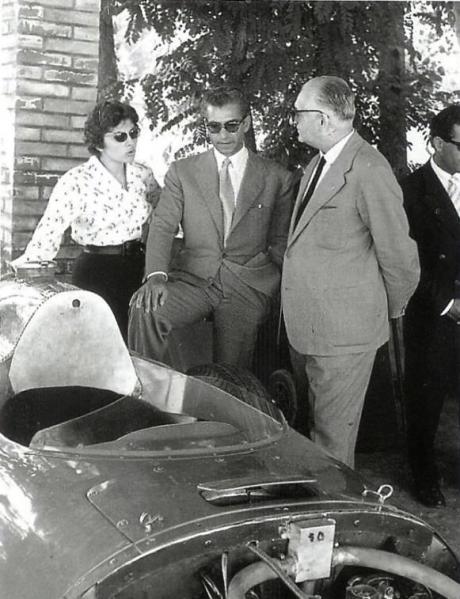 Photo: An ever automobile enthusiast, the Shah and Soraya, are seen here with Enzo Ferrari the famous constructor 1950’s.

• Formerly owned by the Shah of Iran, with fascinating history

Despite its wild lines and bizarre shape, the XNR was — and still is — a real, drivable automobile.

In fact, the XNR, which is powered by a 260 horsepower “slant six” engine, reached speeds of 150 miles an hour on Chrysler’s test track, the automaker has said. That’s especially impressive when you realize that concept cars, even today, are often nothing more than automobile sculptures — three-dimensional doodles that are rarely functional.

But the most amazing thing about the XNR is that it has survived. In fact, it did so in one of the most dangerous places on earth: Beirut during the Lebanese civil war.

After the XNR’s tour of duty as a show car was completed, Carrozzeria Ghia, the Italian coachbuilder that assembled the auto, claimed ownership. Ghia sold the XNR to someone who, in turn, sold it to the Shah of Iran.

After leaving the Shah’s care, the XNR turned up in a Beirut parking garage where a Lebanese car collector found it. The car was moved several times to various hiding places throughout the city to keep it from destruction.

Based on a Plymouth Valiant chassis, the XNR was built from steel, not from fiberglass, as most concept cars are. Its design was partly inspired by the Jaguar D-type, a 1950s racecar with a huge off-center vertical rudder.

The car was in surprisingly good shape, according to RM, but still needed two years of restoration work. Virgil Exner, Jr. provided restorers with his father’s archive of materials related to the car.

Restorers also relied on photographs from Motor Trend and Road & Track magazine, both of which had featured the XNR on their covers during its show-car days.

6 ultra-rare supercars from around the world

“It sounds great,” he said. “The engine note is fantastic.”

There’s no reason the car shouldn’t be able to still hit 150 mph on a track, but given the car’s historic and artistic value it’s unlikely anyone will ever try that again.

Concept cars like this, which automakers use to test out new design themes, can be worth a lot of money. Some, in fact, have sold for far more than was paid for the XNR.