‘Women Intellectual cleansing’ – Mullahs scores an own goal and set a new low! 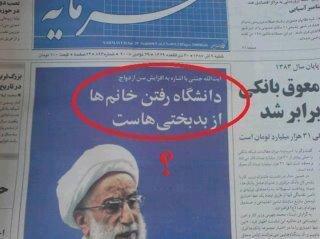 The ‘No’ women to study English literature, nuclear physics, computer sciences, electrical and industrial engineering, business management and Oil Industry is just not about balance, it is the antiquated mindset that brings out such dictates! It is a new low to refute women intellect and a novel kind of sex-discrimination that can only come from fetish, obsessive minds that only think of women as an object.


Last year in July in an article under ‘Cultish Khomeinism’ I wrote ‘Mullahs are clawing back gains Iranian women have achieved.’ True to the colour of the regime it is now a firmly instructed policy that women need to be excluded from education that will give them wings to fly as egalitarian partners. Thirty six universities have announced that 77 BA and BSc courses in the coming academic year will be “single gender” and in effect restricted to men. Ayatollahs in Iran’s government of Allah are concerned about freedom that education has imparted to women. Nobel laureate Shirin Ebadi today has demanded that a UN investigation in recent Mullah announcements where Female students in Iran have been excluded from more than 70 university degree courses in an officially-approved act of sex-discrimination.

The growing educational faculty of women in Iran, have led to including declining birth and marriage rates. Archaic Mullah Mohammad Yazdi, emphasizes the subservience of women: “If kneeling before God were not obligatory, wives should have knelt before their husbands.” He also said: “A woman is wholly the possession of her husband, and her public life is conditional upon her husband’s consent.” These unashamedly intolerant views shed light on how many prejudiced legislation against women has been planned, adopted, and imposed in Iran since 1979.

An intransigent, heartless and fierce force called ‘cultish Khomeinism’ has now fully grown and is extending its tentacles to hinder any say of raison d’être.

Misogynous in temperament, an explosive mix of doctrine and passion, is menacing the freedom and advancement of women. “Women’s rights are human rights”; they are the foremost rights and denial of equality of women and men is a basic violation of principles enshrined in the ‘Universal Declaration of Human Rights,’ according to which women are the masters of their own bodies and feelings. In all frankness, today women’s empowerment and activism is the most and almost certainly the powerful means of combating religious dogma and extremism.

Any course that accords freedom and a license to grow is considered by this ‘predestined system’ as counter revolutionary. Students are the citadel of the possible Iranian fresh tenor; a divided and weakened ‘body’ of reason and logic is the ultimate intention of the Mullahs. This should be opposed. The new policy, places exclusion of women undergraduates from studies in some of the country’s foremost institutions, the subjects excluded are including English literature, English translation, hotel management, archaeology, nuclear physics, computer science, electrical engineering, industrial engineering and business management. The Oil Industry University, with several campuses across the country refuses to accept female students at all, citing a lack of demand. Isfahan University excludes women from its mining engineering degree, and claim that 98% of female graduates ended up jobless.

The mentality that rules this kind of medievalism is the thought that is cast in ‘theocratic’ stone. Yazdi, the Head of the Judiciary, commented on December 15, 1986: “No matter at what stage of knowledge, virtue, perfection, and prudence a woman is, she does not have the right to rule… Even if a righteous accredited woman possesses all qualifications, she cannot assume a leadership position nor can she pass judgment, because she is a woman.” In the words of another Iranian official, women are “immature” and need “guardians.”

The Iranian mullahs are reversing the growth that Iranian women have achieved so far in pursuing their rights of parity; they champion the slogan of ‘domesticity is the women’s holy war.’ The Mullahs fail to make any progress in the field of gender relations; a ghost haunts the Iranian society – the phantom of modernity. Segregation and now closing of the doors of subjects that women can read stems from the desire to dictate; the wrong is within the social structure and the whole social structure needs a rethink.

More than half of Iran’s 3.97 million students are women, studying alongside their male classmates. Education has become a focus for conservatives who want to head off what they consider corrosive western values among the youth born long after the 1979 Islamic revolution. Beyond these so-called ‘deviancy issues’, this archaic rooted law not only helps with the strict moral code of the Islamic law, but allows the shackle of ‘mental occupation’ to prolong. The segregated campuses will have divided intellectual and freedom resources. Dr Ebadi has written to Ban Ki Moon, the UN secretary general, and Navi Pillay, the high commissioner for human rights, Mrs Ebadi, a human rights lawyer exiled in the UK, said the real agenda was to diminish the percentage of female students to below 50% – from around 65% at present – thereby failing the Iranian women autonomy and independence.

What is happening today after toying last year with the idea of ‘gender separation on the campuses’ is the ‘finale’ of what is an affirmed posture of the Islamists. Ayatollah Ali Khamenei, the mullahs’ “supreme leader,” has declared that “women’s first job is to be a wife and mother.” Khamenei dismissed the notion of women’s equal participation in social life in July 1997 as “negative, primitive and childish.” Islamic theologians are profoundly influenced in their belief on the lowliness of women. Their hypotheses of female inadequacy are based on archaic beliefs: “Women mature too fast. The breathing power of men’s lungs is greater and women’s heartbeats are faster… Men heed reasoning and logic, whereas most women tend to be emotional… courage and daring are stronger in men (Moghadam 172).” Khamenei and his cohorts evidently are utterly distanced from the world of knowledge, wisdom and science.

Segregation and selectivity of academic interests is also an attempt to brainwash the mothers of future generations with ideas of a social system that would create a public world of men and a private one for women. Mullahs tend to promote gender and intellectual frontier. High sciences, humanities and metaphysics are on Mullah hit list. On the instruction of Supreme Leader Ayatollah Ali Khamenei, Iran is also eagerly reviewing the curricula of certain subjects deemed too western, including law, philosophy, psychology and political sciences, to ensure they do not run counter to Islamic teachings. A creation of a ‘no man’s land’ for women to venture. When was the last time anyone saw a female Ayatollah in the highest ruling body of Iran?

The top officials of the fundamentalist regime in Iran emphasize that it is the “sacred” responsibility of a woman to serve her husband and take care of the household. A parliamentarian in Iran is on record as saying, “Women must accept the reality of men dominating them, and the world must recognize the fact that men are superior.” One of the Iranian regime’s key ideologues says: “Women and men are equal in their humane essence, but they are two different forms of humans, with two different sets of attributes and two different psyches…”

Ahmadinejad last year was temporarily in the reformists’ camp he had rejected plans to separate male and female students at Iranian universities. They found a new way out instead of gender selection they blocked the courses in thirty six universities for 77 undergraduate courses. This is the ugly way to achieve the goal of ‘gender selection’ by refusing advanced education to women in courses they think can lead to ’empowerment’ within the male dominated culture. Though higher education minister, Kamran Daneshjoo, rubbishes the disagreement, saying that ‘90% of degrees remain open to both sexes; single-gender courses were needed to create a balance.’ According to UNESCO, Iran has highest ratio of female to male undergraduates in the world. Female students have become prominent in traditionally male-dominated courses like applied physics and some engineering disciplines.

Gender-based restrictions and campus divide would have marked one of the most important turnabout and regressive policies since the 1979 Islamic Revolution. This is a new state sponsored experiment, selectivity of the sciences and a state managed social structure that a women can shadow. One needs to take his statements with a pinch of salt. Although I endorse it fully, but deplorably Mullahs’ “moderation” is zilch, a mere illusion. The new convert to moderation is welcome in the camp but Ahmadinejad, Khatami and all the other moderates have to reject medieval system of Velayat-Faqih to see true progress in Iran for emancipation of its brave courageous people from the manacles of bigots and mullahs.

Philosophy and sciences has been a bane of the traditionalists. Khamenei led discrimination against humanities and metaphysics actually originally is set in the decline when the puritan Al-Ghazali began to undermine the rationalistic tradition and instead push for dogma over thought, obedience over free will and the primacy of doctrine. Al-Ghazali poured cold water to great passion of science. Al-Ghazali was responsible for the diversion of the course of Muslim society from rational society to puritan one, from dynamic community to static one, from world-class scientists to, at last, fiercest terrorists. Imam was one to blame for the backward of Islam among other civilizations.

In 1000-1100 the Mutazilites carefully cultivated an ‘enlightened moderation’ and allowed for the growth of knowledge and in their active promulgation and acceptance of ‘Science as a part of the religion doctrine’ they brought to the Islamic world her Golden Age. This guidance to coexist was advanced by the renowned thinkers such as Avicenna, Al-Raazi, Al Ma’ari and Omar Khayyam; each of whom would later be remembered for the striking global contribution to the field of art, science and logic. Great ideas are born in the milieu of freedom and environment of self-determination, free from the intercession of deities and providence.

Unfortunately the battle of enlightenment that Averroes lost to Ghazali was won by the philosophers of the west in Italy and the continent. Result was that Europe marched into resurgence and rebirth as Middle East drowned in the sea dark ages that continues until today. The Incoherence of the Philosophers marked a turning point in Islamic philosophy in its vehement rejections of Aristotle and Plato. The book took aim at the falsifa, a loosely defined group of Islamic philosophers from the 8th through the 11th centuries (most notable among them Avicenna and Al-Farabi) who drew intellectually upon the Ancient Greeks.

Imams of Iran today are exactly following course; silence like sheep is no good, let’s stop them from this ‘rape of intellect.’ The ‘Qom led mob pillage’ of 5000 years old civilisation has a mindset that nearly 1000 years ago promulgated Avicenna, Al-Raazi, Al Ma’ari and Omar Khayyam as heretics! Ghazali bitterly denounced Aristotle, Socrates and other Greek writers as non-believers and labelled those who employed their methods and ideas as corrupters of the Islamic faith. Nothing has changed for a 1000 year, Are we intellectually frozen? Yes and Imams continues to do that without any remorse.