HAFEZ: OBAMA and the “Persian Carpet” 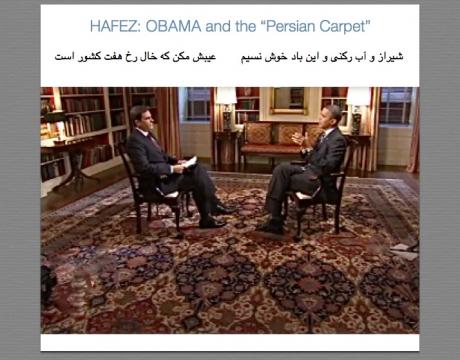 HAFEZ: OBAMA and the “Persian Carpet”:

A few days ago, I came across the above photograph of a recent interview with President Obama in the White House, probably while reading an article on the current US elections.  Now, I don’t know about you, but whenever I see a Persian Carpet, I am immediately transported to a different place and time. I leave that moment, whether I’d been looking at a photo of a President being interviewed, or say, standing in the lobby of most Ralph Lauren stores, which are decorated with the most excquisite of Persian Carpets, or any where else I see one. I just leave that circumstance  – and it takes me to a very deep, national, and emotional place. Everything that means “home” comes rushing to me, very tangibly, and with a profound sense of transported warmth.

So, that’s how today’s Blog started. I’d probably looked up some story on the US Presidential elections, this photo came up, and boom! I’m in a completely different place! If you also googled the photo of Pope John Paul II’s funeral service, where all the dignitaries were gathered, you would see John Paul’s very simple wooden coffin, lying on the most exquisite  Persian carpet, in the middle of the Vatican, with dignitaries from four corners of the globe at the servcies. (reference to Seven Nations/Haft Keshvar below in today’s poem.) On that occasion too, I got jolted and transported to another place, and in fact have saved my New York Times front cover with the Persian carpet and John Paul II’s simple coffin.

The tradition of the Arts in our culture, isn’t some haphazard thing. What fascinates me is the way the Persians were among the first people in history introducting the concept of heaven to earth. Persian Gardens, were the first expressions of “Heaven on Earth” in human history. The idea that God has planted Beauty, and the potential to create Beauty, in our midst, as a way of celebrating the divine. And to the artist, his creation, the creative process itseslf, is a divine experience.

For those of us in the visual arts – no single person in recent history,  has contributed as greatly to the preservation of the Persian Arts, as Arthur Upham POPE. His “Survey of Persian Art” – a massive 10-12 volumes (depending on the publisher) – used to fill as much bookcase space in my childhood home as the Encyclpedia  Britannica. Volumes and volumes of the white binding – (they are now in my own home.)

Pope loved Iran, but the reason I am bringing him up – is because his love for Iran had started with “Persian Carpets.” As a child of a wealthy family, Pope used to visit his aunt in a posh neighborhood of Boston – and the Persian Carpets in this aunt’s home, would captivate him beyond words. “I looked at those rugs” … and it felt like a calling, he would say. Can you imagine what a sensitive little boy he must have been? Later in life, he would say that his obsession with Iran came from there: “And I felt that the people who had produced those – had a deep and genuine feeling for art – combining emotion with form and discipline, proof of real superiority of mind and spirit.”

He went on to spend the 2nd half of his life in Iran – arrived there aged 44 in 1925 and died and was buried (at his insistence) in Isfahan in 1969. In his final days, he often said that the first half of his life was merely a preparation for the second half: Persia! Pope’s love for the arts of Persia started with “Persian Carpets” when he was a little boy, and expanded to all the visual arts of Iran. A truly inspired man.

I’ve learned much from one of my favorite books on Hafez by Pourafzal/Montgomery: “The SPiritual Wisdom of Hafez”. To Hafez, celebrating  Beauty on earth was a way of life. “While Khayyam found joy in the order of the universe and Rumi reveled in the rapture of union with God, Hafez’s imagination translated all phenomena into the beauty of the divine and transformed eveyday occurrences into joyful gifts of the universe.”

Hafez’s love for Shiraz reminds me of my own love for Persian Carpets. He saw physical beauty everywhere, in Shiraz – from the river Roknabad to the garden of Mossala (where he is also buried.) To him, Shiraz was the epicenter of the Beauty of this world:

Shiraz, its river Rokni, and this town’s gentle and perfumed breeze,

Find no fault with her – she is the very beauty-spot of the Seven Nations.

A beauty-spot or beauty-mole on a woman’s face has many layers of meaning and is the focal point of her Beauty. As to Seven Nations – Iranians in ancient mythical times, considered the world to be made up of “Seven Natons” – with Iran in the center – like the mole on a Beloved’s face. For Hafez, it is now Shiraz that takes that important place, playing the role of the beauty-mole.

And for me, watching the President of the USA – the current world’s super power – sitting on a majestice “Persian Carpet”, it is the carpet that plays the part of that  beauty-mole.  The carpet’s beauty, like the mole on a Beloved’s face, also transported me to very different places – to the “Seven Worlds” of my own mind.

Thank you, from among many books, especially to:

“The Spiritual Wisdom of Hafez” – Haleh Pourafzal and Roger Montgomery