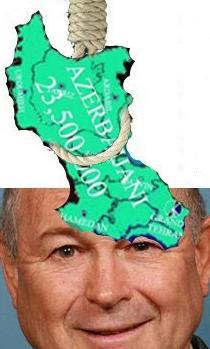 The Iranian-American community is appalled to hear that a person of your stature as Chairman of the House Foreign Affairs Subcommittee on Oversight and Investigations would entertain the absurd notion of separating Azerbaijan from our beloved motherland Iran, simply because of a phone conversation with an ill-educated member of the ruling party of the Republic of Azerbaijan.

Mr. Congressman, there are simply so many errors in your short letter to Mrs. Clinton, that one is dumbfounded as to where to start. To begin with, through the course of the history of nations many invasions bring linguistic, if not necessarily language, changes. To assume that someone who speaks a language must be ethnically of a certain origin is a false assumption.

Azerbaijan, the land of Zoroaster, has always, and continues to be, an inseparable part of Iran. Azaris are Iranians first and foremost. The historical account of Azerbaijan belonging to Iran and Azari as Iranians are too numerous to mention here, but for the Congressman’s enlightenment, a few are listed herein:

Ahmad Kasravi, a notable Iranian linguist and historian, known for his solid research on the ancient Azari language, successfully demonstrated that Azari language was an offshoot of Pahlavi language, arguing that the ancient Azari language had been closely related to the Persian language and the influx of Turkic words began only with the Saljuq invasion. Mr. Kasravi proved that the true national language of Iranian Azerbaijan was Persian and, due to this discovery, he was granted membership of the London Royal Asiatic Society and American Academy.

Many other notable Persian, Arab and Western scholars and historians further provide documentation that the entire land called Azarbaijan has always been a part of Iranian territory.

Abu al-Hasan Ali ibn al-Husayn Al-Masudi (896-956), the Arab historian states: The Persians are a people whose borders are the Mahat Mountains and Azarbaijan up to Armenia and Aran, and Bayleqan and Darband, and Ray and Tabaristan and Masqat and Shabaran and Jorjan and Abarshahr, and that is Nishabur, and Herat and Marv and other places in land of Khorasan, and Sejistan and Kerman and Fars and Ahvaz.

Hamzeh Isfahani writes in the book al-Tanbih ‘ala Hoduth al Tashif that five “tongues” or dialects, were common in Sassanid Iran: Pahlavi, Dari, Parsi (Farsi), Khuzi and Soryani. Hamzeh (893-961 A.D.) explains these dialects in the following way: Pahlavi was a dialect which kings spoke in their assemblies and it is related to Fahleh. This name is used to designate five cities of Iran, Esfahan, Rey, Hamadan, Man Nahavand, and Azerbaijan.

According to Professor Tadeusz Swietochowski:…, the name “Azerbaijan” is derived from Atropates, the name of a Persian satrap of the late fourth century B.C. Another theory traces the origin of the name to the Persian word azar (“fire”‘) – hence Azerbaijan, “the Land of Fire”, because of Zoroastrian temples, with their fires fueled by plentiful supplies of oil. Azerbaijan maintained its national character after its conquest by the Arabs and its subsequent forced conversion to Islam. Only in the 11th century, when Turkic tribes under the Seljuk dynasty entered the country, did Azerbaijan acquire a significant number of Turkic inhabitants. The original Persian population became fused with the Turks, and gradually the Persian language was supplanted by a Turkic dialect that evolved into the distinct Azari language.

Furthermore, claiming that East and Western Azarbaijan were named by the Islamic Republic is totally absurd and inaccurate, since the regime came to power only 33 years ago. The Turkomanchai Treaty the Congressman refers to in your letter was a treaty between Russia and Persia ending the Russo-Persian War of 1826–28. According to the terms of the treaty (Article 4 ), Iran lost sovereignty over Yerevan (current capital of Armenia), Nakhichevan, Talysh, Ordubad, and Mughan regions of Arran Province (now part of modern Azerbaijan Republic), in addition to all lands annexed by Russia in the Gulistan Treaty. Further proof that the current Republic of Azarbaijan belonged to Iran and not the other way around.
Congressman, please do not make the same mistake as the current administration.

As Iranian-Americans, we believe that President Obama is on the same erroneous foreign policy path as President Carter over three decades ago when it comes to the Middle East. Much like the “gift of Islamic Republic to Iran, the ‘gift’ of a terrorist organization such as the Muslim Brotherhood over Egypt and Al Qaida in Libya are the very by-products of an ill-informed and naïve President and Democratic administrations. The great majority of Iranians despises the current criminal regime in Iran and do not identify with its leadership’s fanatical and expansionist ideology. We consider the current regime a menace to world peace and are seeking the world’s assistance to get rid of the parasite called the Islamic Republic of Iran.

Congressman Rohrabacher, there are over a million Iranian-Americans living in the United States, indeed, Iranians are amongst the most highly educated ethnic minority groups living in the United States. Most importantly, we are very active in politics, because of the unfortunate imposition of the Islamic Republic government on our country, largely due to President Carter’s ineptitude and lack of knowledge and familiarity with the Middle East.

Mr. Rohrabacher, educated Iranians bear no animosity toward the Republic of Azarbaijan. Our historic cultural and linguistic ties date back centuries. Neither do the Iranian people bear any animosity toward the state of Israel. A great majority of educated Iranians consider Israelis as their friends. Cyrus the Great has been mentioned in the Hebrew Bible as the patron and deliverer of the Jews who ended their captivity. Under our great king the world’s first Charter of Human Rights was established. The Congressman might be interested in knowing that prior to the Islamic Republic seizing power 33 years ago, Iran and Israel were the closest ally of the United States in the Middle East.
Please do not equate the people of Iran with the current repressive regime in power.

Various Iranian opposition groups have been fighting the regime inside and outside of Iran. We are opposed to futile dialogue and diplomacy of three decades and are seeking regime change for Iran and have pushed for the strictest sanctions against the regime, including a full embargo of Iranian oil. Of course, the regime has derided the impact of international sanctions on its economy, but that swagger is showing signs of becoming more of a panic as Iran’s currency continues its slide in the wake of new US sanctions targeting the Iranian central bank. We are concerned that, in your misguided zeal to help Israel, you might just provide the Islamic Republic the pretext it needs to mobilize the masses with its anti-Western propaganda and further suppress the opposition groups fighting the regime so valiantly!

Despite your recommendation, it is about time that countries such as the United States publicly align themselves with the democracy-seeking people who have suffered brutally at the hands of dictators and tyrants. It is time to give honor, dignity, moral imperatives and ethical values precedence over lucrative financial contracts that often occur, wrongly, at the expense of ordinary Iranian citizens’ lives.

By supporting pro-democracy Iranian opposition groups, the world community can not only avert a regional and potentially global catastrophe, it will also help establish a democratic system of government in the region. If Iranians are successful in shaking off the yoke of theocracy, their success could herald the failure of a political and militant Islam. Helping Iran become a democracy is not only is a moral imperative, but should be considered an essential foreign policy priority that will bring a sustainable and lasting peace to the Middle East.

A great majority of Iranians do not plan to vote for Mr. Obama as he turned his back on Iranian demonstrators during the June 2009 uprising and stood silent while the regime thugs violently crushed the demonstrators and fatally shot our beloved Neda. He is doing the same in Syria. We are looking forward to Mr. Romney’s presidency and the Republican control of the House and the Senate and are hopeful that he will support the pro-West and pro-democracy Iranian groups to get rid of this rapist regime and help restore peace and order to a troubled region of the world brought on us largely due to foreign policy mistakes of the Democratic administrations. Please do not stoop to their level and make the same mistake.

Reza Kahlili, Served in CIA Directorate of Operations, as a spy in Iran’s Revolutionary Guards, counter-terrorism expert, Author of A Time to Betray; Member, Advisory board of Foundation for Democracy in Iran (FDI)