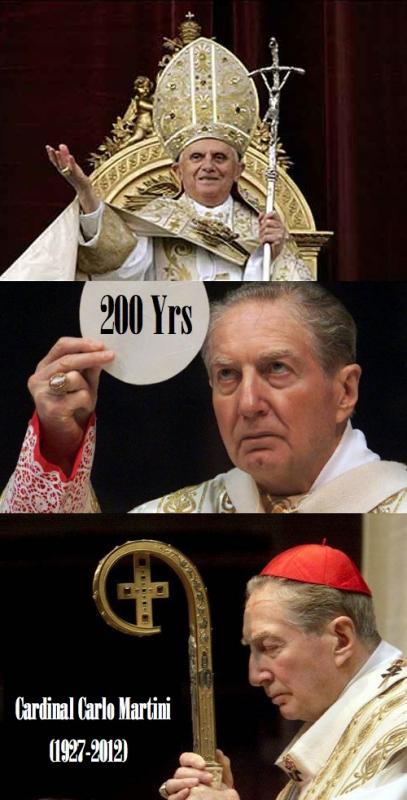 “The truth is something that cannot be hidden”. “Feigning wealth, power, confidence, good health or activism is simply a way to exorcise the fear of time slipping away from us.”


Pope Benedict is now faced with a difficult choice: whether or not to attend Cardinal Martini’s funeral in Milan on Monday – which many leading Catholics say would be a powerful affirmation of Church unity. (Source: persianrealm.com)

Cardinal Carlo Maria Martini passes away at age of 85:

« Cardinal Martini was a renowned academic and biblical scholar, as well as a prolific author of popular books on religion.

But it is highly unusual for a leading member of the Catholic hierarchy openly to challenge Church teaching – or rather to criticise the way in which the Church often expresses its teaching with negatives and prohibitions rather than encouragement to believers.

Pope Benedict is now faced with a difficult choice: whether or not to attend Cardinal Martini’s funeral in Milan on Monday – which many leading Catholics say would be a powerful affirmation of Church unity.

The Pope has rarely awarded red hats to Catholic leaders of any nation who dare to question traditional doctrine. »

A Moral Tightrope:   Scene from the Shoes of the Fisherman :

In this most poignant scene from 1968’s “The Shoes of the Fisherman”, Cardinal Kiril Lakota finds himself under the spotlight, wading into deep philosophical/theological waters. During a brief respite from the papal conclave, the priest who had spent 20 years in a Siberian labour camp is asked how he reconciles the justification of violence with being a bishop of the very church Jesus Christ established. While his reply runs the risk of leaving many of his peers incredulous, possibly bearing the brunt of being ostracized, it actually serves to be the defining moment of his rise to the See of St. Peter… the moment when prisoner 103592R dons the Shoes of the Fisherman.

In The Shoes of the Fisherman (Last Scene):

The last scene from the 1968 movie with Anthony Quinn. Great scene from a great movie. MGM copyright.

Italian Cardinal Carlo Maria Martini has described the Roman Catholic Church as being “200 years behind” the times.

The cardinal died on Friday, aged 85.

Italian newspaper Corriere della Sera has published his last interview, recorded in August, in which he said: “The Church is tired… our prayer rooms are empty.”

Martini, once tipped as a future pope, urged the Church to recognise its errors and to embark on a radical path of change, beginning with the Pope.

Thousands of people have been filing past his coffin at Milan’s cathedral, where he was archbishop for more than 20 years.

The cardinal, who had retired from the post in 2002, suffering from Parkinson’s Disease, is to be buried on Monday.

Martini, a popular figure with liberal stances on many issues, commanded great respect from both Pope John Paul II and his successor Pope Benedict XVI.

The cardinal – a member of the Jesuit religious order – was often critical in his writings and comments on Church teaching, says the BBC’s David Willey in Rome.

He was a courageous and outspoken figure during the years he headed Europe’s largest Catholic diocese, our correspondent says.

Cardinal Martini gave his last interview to a fellow Jesuit priest, Georg Sporschill, and to a journalist at the beginning of August when he knew his death was approaching.

The cardinal had returned to Italy from Jerusalem, where he had settled on retirement in 2002 to continue his biblical studies.

Catholics lacked confidence in the Church, he said in the interview. “Our culture has grown old, our churches are big and empty and the church bureaucracy rises up, our religious rites and the vestments we wear are pompous.”

Unless the Church adopted a more generous attitude towards divorced persons, it will lose the allegiance of future generations, the cardinal added. The question, he said, is not whether divorced couples can receive holy communion, but how the Church can help complex family situations.

And the advice he leaves behind to conquer the tiredness of the Church was a “radical transformation, beginning with the Pope and his bishops”.

“The child sex scandals oblige us to undertake a journey of transformation,” Cardinal Martini says, referring to the child sex abuse that has rocked the Catholic Church in the past few years.

He was not afraid, our correspondent adds, to speak his mind on matters that the Vatican sometimes considered taboo, including the use of condoms to fight Aids and the role of women in the Church.

In 2008, for example, he criticised the Church’s prohibition of birth control, saying the stance had likely driven many faithful away, and publicly stated in 2006 that condoms could “in some situations, be a lesser evil”.

Corriere Della Sera plans to give a copy of his last book entitled Speak From The Heart to all its readers.