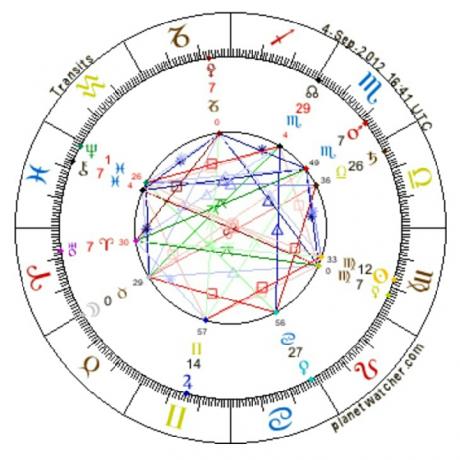 The Moon just now moved from Farvardin or Aries to Ordibehesht or Taurus. For a few day the focus was on you putting yourself across first. Now is to put what you have first.

Look at your own asset. Value your self worth. Four weeks ago when the Moon was in Ordibehesht it forced you to think about the challenges. This time it is different.

Quite simply the Moon is making really nice angles to Sun Mercury Pluto and Jupiter. The Moon deals with what you did in the past to the present day, whilst the Sun says look at today and move forward. Both these concepts are in harmony.

In fact tomorrow is a very rare day when have many planets and Moon 60 degrees apart. A Grand Sextile is formed. The Star of David. It is a great day to really push for getting practical work done with so much emphasis on the Earth element.

Of course just now we have some arguments flaring up with the Moon opposite Mars but that is minor compared to the overall great picture.

You could just chill and absorb it all, or go for it and push your luck. Either way enjoy exploring material progress. Time to really be measuring and taking into account how much money you can make, especially with good angles to Venus later on. Make the most of it.