One of those WTF moments in American political history. 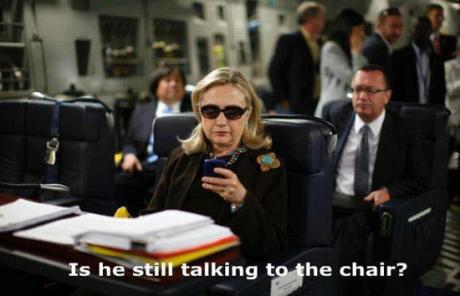 With no doubt one of those WTF moments in the American political history is going to be the Clint Eastwood’s Empty Chair Speech and here are the top ten comments on this subject.

After the speech Eastwood continued the debate behind scenes with dishwasher, refrigerator and a Bunn coffee machine

Clint Eastwood is still backstage arguing with a vending machine.

Even Neil Diamond posted “nobody talks to a chair”. Oh, wait…

If Eastwood’s speech was the pinnacle of absurdity and bizareness, Romney’s was the height of blandness
Charlton Heston is dead, so Clint is the “new” Crazy Old F#ck now?
WINNING!

Will everyone PLEASE give Clint a break. He is an old man and what you don’t understand is that he actually did see someone in the seat.

More proof that republicans are idiots!! thanks clint﻿

Let me ADD one more forgotten fact in the mix of idiotic comment after idiotic comment that makes me ashamed to exist at times amongst you fools. At the end of the day, the term WE THE PEOPLE is the most powerful term in the Constitution of this crazy country. WE THE PEOPLE have the power to make the crooks in Congress fight for ALL of our interests together, not separate. Republicans AND Democrats at the end of the day are the same family, are in the same club sort of speak. The club of MONEY. How do they stay in this revolving circle of power, money without being held responsible for not working for WE THE PEOPLE as a WHOLE…….by keeping us fighting each other every four years while we ignore that Congress and Wall Street are the crooks. The minimum wage has only gone up ONCE in 30 years…..but the COST OF LiVING has increased EVERY YEAR. Most people are not asking for a handout, they are quietly asking to be VALUED. We need to start SCREAMING IT. This country could not function without the WORKERS.

Clint Eastwood on the phone with Obama now: “It all went according to plan,sir”