Astrology of Sun in Shahrivar or Virgo and Moon in Khordad or Gemini 2012. 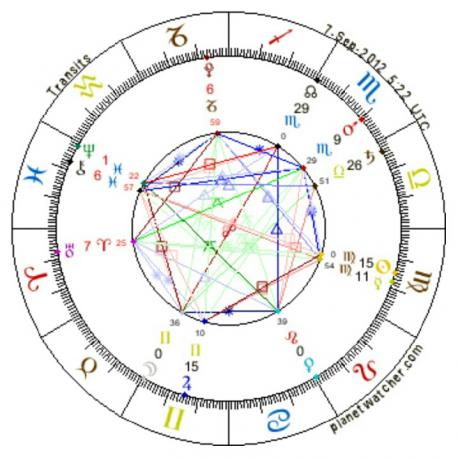 Astrology of Sun in Shahrivar or Virgo and Moon in Khordad or Gemini Venus in Amordad or Leo 2012.

Just now the Moon went from Ordibehest or Taurus to Khordad or Gemini. But Venus has gone from Cancer to Leo as well.

For all you Iranians who are visiting this blog for the first time, welcome. This report is a guide to what your ancestors contributed to the world, many thousands of years ago, but was crushed and destroyed by the likes of Salman Parsi.

Religion and Astrology have at times become bitter rivals, as the former tried to simplify change. Life changes. There is no “one size fits all” solution. Space time analysis uses tools that give you a vision to see some changes. The dashboard in your car is much better than what you believe is ahead. There are thousands of destinations. Life is great.

And so this report deals with the various indicators on this dashboard and what each one is reading. You choose what to look at.

The Moon moves more than anything else and so will deal with the most sensitive area of our lives that changes a lot. This is the area of ehsasat or feelings. You have new ehsas and old ehsas. The Moon’s position will trigger them both.

For example Jupiter is in Khordad or Gemini and it was there last week and last month. So all the children born in the past two weeks will have the same Jupiter position.

This is how Astrology works in the simplest logical sense. With the Moon in Khordad and Sun in Shahrivar I need to be extremely logical and systematic.  You see there is a reason why I am giving this lesson now.

So all you curious cats rest assured, we Iranians spotted the changes and built places like Throne of Solomon to observe the planets and heavens in the sky. But some twat decided he could explain it all in a religious way and burnt all the libraries. But it all survived in our hearts.

Speaking of hearts we have to say hello to Venus. It is now in Amordad or Leo. The love of Royalty, pageantry, creativity, expression, risk, gamble has now started. Have fun. Go and seriously put yourself on the stage of life.

Venus will be making a challenging angle to Mars. So you will be very passionate about your love now. It is easy to say men and women in this Mars and Venus challenge. But it is really the challenge of the individual versus the relational elements in all of us.

Venus deals with what your dealings are. All dealings involve two parties. It is not just you. It is Mehr. So you think first then act.

Mars is involved with the individual or khodet. So it is yourself that is involved in the 100 meters sprint. So you act first and think later.

These two areas of your life will be difficult to deal with and the Moon will trigger them as it makes special angles to them. For today and tomorrow the Moon will be more involved with Jupiter as it moves close to it as seen from Earth in Khordad or Gemini. That’s lucky as Jupiter Ohrmazd will always expand that area it is in.

Khordad deals with logical deductive and reasoning functions. So now is the time to make first time calls and connections. Once a month the Moon comes around to this position and it is a great time to really work on improving your vocabulary, sentence structure and statements. Look at how I have spent so much time explaining what all this astrology really is. Do the same in whatever field you are in.