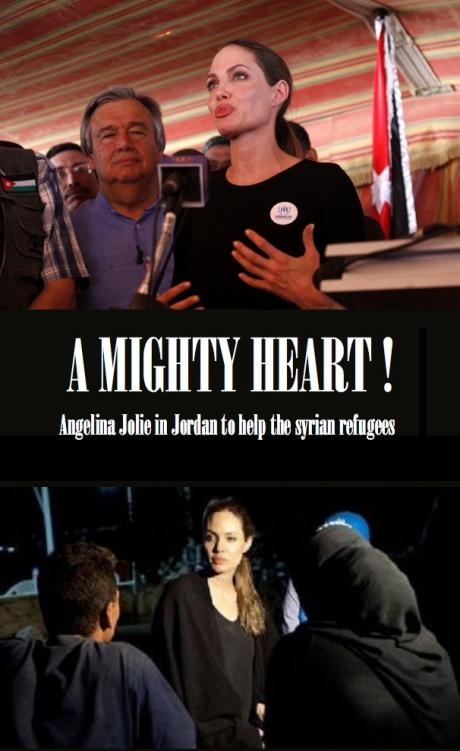 Actress Angelina Jolie has called for an end to the violence in Syria after meeting refugees in Jordan’s Zaatari camp.(Source: persianrealm.com)

The number of people fleeing the conflict in Syria is said to be more than 235,000, according to the UN High Commission for Refugees. Speaking at the camp she said: “It’s impossible to imagine any mother standing by and not stepping up and doing something to prevent this.” (See Related News)

Angelina Jolie in Jordan to help the syrian refugees 2012 :

Mariane (Angelina Jolie) confronts the reality of her husband’s murder, and in the process, finds the strength to endure anything.

In the Land of Blood and Honey (trailer):


Angelina Jolie’s directorial debut “In the Land of Blood & Honey” will be released on December 23, 2011. The movie centers around a young Serbian man (played by Goran Kostic) and a Bosnian-Muslim woman (Zana Marjanovic) who fall in love before the Bosnian War of 1992 pulls them apart.

HAS BEEN TO  ALL HOTSPOTS


During a day-long visit to Baghdad, UNHCR Goodwill Ambassador Angelina Jolie visited a makeshift settlement for internally displaced people in the Chikook suburb of north-west Baghdad where she met with four families displaced from the district of Abu Ghraib and from the western suburbs of the Iraqi capital.

KABUL, Afghanistan, March 2 (UNHCR) — UNHCR Goodwill Ambassador Angelina Jolie on Wednesday called for greater focus to be put on the reintegration of former Afghan refugees as she wrapped up her second visit to the western Asian nation.

United Nations Goodwill ambassador and Hollywood actress Angelina Jolie, arrived in Libya on Tuesday to visit the embattled city of Misrata, as well as express her solidarity with the nation. Jolie joined Libyans to witness the country’s new chapter after the ousting of Muammar Qaddafi.

SCHINDLER’s LIST : In Tribute to the Abandoned Children of Syria