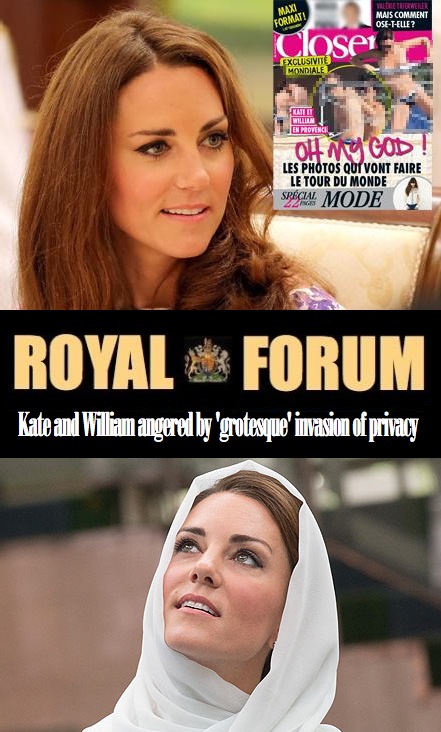 The Duke and Duchess of Cambridge are hugely saddened over the “grotesque and unjustifiable invasion of privacy” by a magazine which published topless photos of Kate, a royal spokesman says. (Source: persianrealm.com)

French publication Closer printed the pictures of the duchess, taken during their private holiday in France. The Photos available online appear amidst a Crucial First State visit to Asia including stops in Singapour and Malaysia where the Royal Couple visited a Mosque (See Related BBC News)

The Duke and Duchess of Cambridge are hugely saddened to learn that a French publication and a photographer have “invaded their privacy.”. Report by Andrea Lilly.

NOT THE FIRST TIME :

FILM Based on the 1971 Baker Street robbery in central London, during which compromising deposited photos of a British Royal (in the film, Princess Margaret) and valuables were stolen and never recovered.

Topless pictures of Kate Middleton soon to be released No privacy:

A victim of press intrusion says the Duchess of Cambridge was “inviting photographs” when she chose to sunbathe topless while on holiday with her husband.

France has a strict privacy law that makes it a criminal offence to publish information on a person’s private life without the express permission of the person concerned.

In France they will tell you their laws are much tighter than they are in the UK – but it’s only half of the truth.

But these days there are raunchier titles, like Closer, Public and Voici, who unashamedly indulge in the celebrity gossip. And they budget for the legal payouts which in this case are seemingly inevitable.

A few years ago Closer was sued for invasion of privacy by Jenifer Bartoli, a well-known pop singer who featured on Star Academy.

As part of its punishment half of the magazine’s front cover was blanked white, with the facts of the judgement printed in black. But for editors the fine is worth the risk.

And no doubt this latest edition of Closer magazine will sell out, there will be a bigger print run, a legal tussle to follow – but the end result is a huge profit and for Closer some priceless publicity.

Closer’s editor, Laurence Pieau, recently said that each month three out of every four covers wil feature stars from the US because it carries less risk.

“It is very hard here in France,” he said. “The privacy law is very restrictive but our readers are interested in what people are doing, how they dress, how they do their make-up.

“They do not want to automatically trash them, but they like to know how they are living their lives. And that is what we like to show.”

The Relationship between the Royals and the media has always been a delicate one. Ideally it is symbiotic. When it becomes parasitic, the Royals hit out.