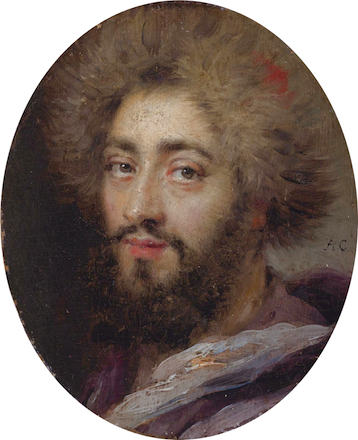 The subject of this painting is Mohammed Reza Beg, or according to French sources Méhémet Riza Beg, the Persian Ambassador Extraordinary to France, during the reign of Louis XIV, the Sun King. He was sent to France by the order of Shah Sultan Husayn of Safavid Dynasty. His mission was to ask for French assistance to deter the Ottoman threat, and to aid Persia to fight Arab pirates in the Persian Gulf. He was able to sign a treaty of commerce and friendship between France and Persia at Versailles August 13, 1715. To French, however, the purpose of this mission was uncertain.