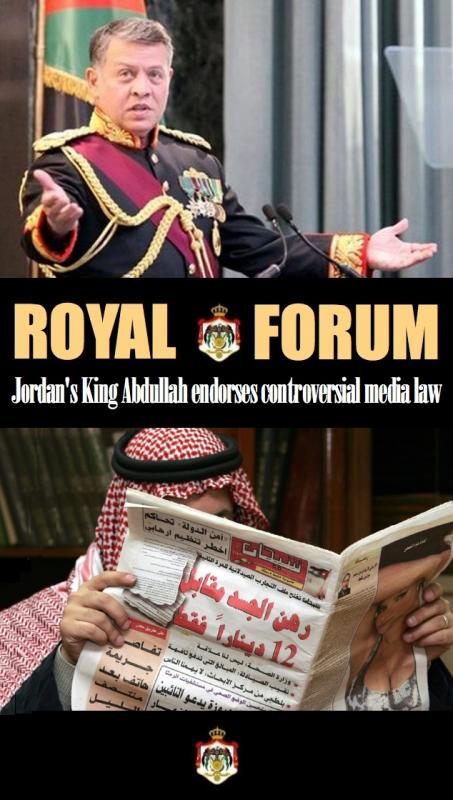 The legislation requires “electronic publications” in Jordan to get a licence from the government. (Source: persianrealm.com)

The King and the People

Bordering the Israeli-Palestinian conflict and the turmoil in Syria, and with internal pressure for greater reforms, how will Jordan’s monarchy respond? It has a population of less than seven million people, no oil, and it relies on aid from its rich neighbours and its friends in the West. But a combination of geography and history has blessed or, depending on your perspective, cursed the Hashemite kingdom of Jordan, with a critical role in the politics of the Middle East, the Israel-Palestine conflict and, of course, the Arab Spring. The Café this week is in Amman to discover what the future holds for a country plagued by corruption and economic stagnation and with a population divided between ethnic Jordanians and marginalised Palestinians. But it is not just the Palestinians who are disgruntled. The opposition to the regime ranges from the Muslim Brotherhood, to the middle classes to the former army generals and Bedouin tribal leaders that the ruling royal family has traditionally relied on for support. Criticism of King Abdullah and his wife, the glamorous queen Rania, is now commonplace here in the capital city. But the question is: Do Jordanians want reform or a revolution?

Jordan’s King Abdullah has endorsed a new media law which critics say will stifle freedom of expression online.  The legislation requires “electronic publications” in Jordan to get a licence from the government.

It also gives the authorities the power to block and censor websites, whose owners will be held responsible for comments posted on them. Human Rights Watch accused the government of using such legislation to “go after opponents and critics”.

Media professionals and ordinary citizens regularly found themselves charged with and convicted of criminal offences related to speech, it said.

In April, the State Security Court military prosecutor detained the editor of the Gerasa News website for trying to “undermine the system of government” after it published an article about the king’s alleged intervention in a corruption investigation.

The case remains open but the trial has not yet started.

Human Rights Watch said the dangers of the amendments to the Press and Publications Law endorsed on Monday arose from its vague definition of the “electronic publications” which would be affected, the new executive power to block websites, and the unreasonable restrictions on online content, including comments posted by website users.

The legislation’s definition of electronic publication is “an electronic site on the internet with a fixed address that offers publication services”.

Any that publish “news, investigations, articles, or comments, which have to do with the internal or external affairs of the kingdom” must register with the commerce ministry and get a licence from the culture ministry.

The culture ministry will have the authority to block websites that are either unlicensed or deemed to be in violation of any law, and to close the website’s offices without providing a reason or obtaining a court order.

The owner, editor and director of an electronic publication will share the responsibility for comments posted on their website, and be obliged not to publish any “containing information or facts unrelated to the news item or if the truth has not been checked”, or if they “violate laws”.

“The government has not shown a valid reason for prohibiting user comments that are deemed unrelated to the item that triggered the comment, a prohibition that appears to be arbitrary interference in the right to free expression,” HRW said.

“Obliging website managers to check the truth of comments is also not a valid restriction on freedom of speech, which includes the freedom to express unproven statements or even falsehoods.”

The Associated Press estimated that about 400 Jordanian websites would be affected by the new law.

The Press and Publications Law and the penal code already criminalise defamation, including libel and slander, including against entities that are not people, such as government institutions, symbols and religions.

Cyrus Amir-Mokri: How Truly  Democratic Was the 1906 Constitution In The First Place?

NETWORK: Assange and Zakaria have  meddled with the primal forces of nature!

Russell Peters Punk’d by the King of Jordan ;0)

Jordan King in talks with Mahmoud Abbas on Palestinian statehood bid

Jordan’s King  Warns: ‘No one has any idea what to do about Syria’

UP CLOSE &  PERSONAL: Jordan’s King Abdullah II takes You on a Royal Tour

AXIS OF  COOPERATION: Egypt, Jordan and Iran working with US in 1950s

PrevPreviousThe Anger Of Imbeciles
NextDemented Circus Clowns Juggle Planet and Nukes to Show Off who has Biggest Penis.Next