Demented Circus Clowns Juggle Planet and Nukes to Show Off who has Biggest Penis. 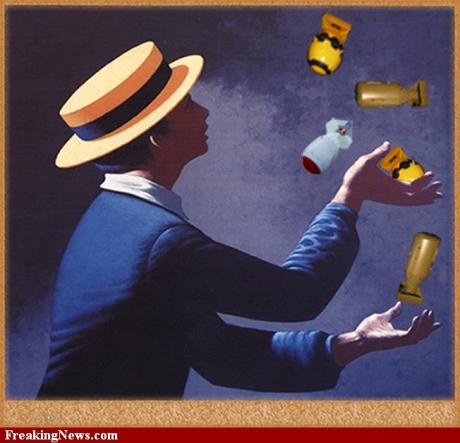 Read the article below and discover for yourself how utterly irresponsible and careless those that have nuclear weapons have been.

Read how they have been juggling these holocaust causing weapons and the planet like as if they are some demented circus clowns.

Read how close they have repeatedly come to destroying the entire planet.

Nuclear weapons must all be destroyed and never built again because we humans simply don’t have the maturity, morality, or sufficient understanding to possess them.

We humans are like a two year old child with matches in one hand and a stick of dynamite in the other.

September 16, 2012 “Information Clearing House” – President Jimmy Carter’s National Security Advisor was about to wake him up in the middle of the night to inform the President that 220 Soviet nuclear missiles were headed our way, when he learned that someone had stuck a game tape into the computer by mistake.

Three years later a Soviet Lieutenant Colonel acted out the same scene, with the computer glitch on his side this time. Then in 1984 another U.S. computer glitch led to the quick decision to park an armored car on top of a missile silo to prevent the start of the apocalypse. And again in 1995, the Soviet Union almost responded to a U.S. nuclear attack that proved to be a real missile, but one with a weather satellite rather than a nuke. One Pentagon report documents 563 nuclear mistakes, malfunctions, and false alarms over the years — so far.

Then there are the accidents, of all variety. Nuclear submarines of the sort now looking for trouble in the Persian Gulf have been known to collide with other ships. At least eight nuclear submarines (one French, two American, and five Russian) are known to be rotting at the bottom of the sea, leaking uranium and plutonium. In 2003 the U.S.S. Hartford, a nuclear powered submarine, hit a rock on a tiny island north of Sardinia. The area is now highly radioactive.

In 1961 a U.S. B-52 with two nukes on board blew up over Faro, North Carolina. One of the bombs, with a parachute to slow it down, was found. Five of the six fuses designed to prevent full nuclear detonation had failed. The other nuclear bomb buried itself 20 feet deep in the ground, lighting up the sky like daylight. The military deemed that one hard to dig out, and left it there. And there it sits. This little mishap involved bombs that were each 250 times the power of the Hiroshima bomb. The commander of the Explosive Ordnance Disposal Team, Lt. Jack B. ReVelle, remarked, “How close was it to exploding? My opinion is damn close. You might now have a very large Bay of North Carolina if that thing had gone off.”

In 1956, a B-47 carried two nuclear capsules from MacDill Air Force Base in Florida, headed to a refueling over the Mediterranean, but never arrived and was never found. In 1958, a B-47 crashed into an F-86 during a combat simulation off the coast of Georgia, near Savannah. A nuclear weapon was jettisoned over water and never found.

On January 17, 1966, a U.S. B-52 carrying four live hydrogen bombs smashed into a tanker during midair refueling over Spain. Two of the bombs were blown apart like dirty bombs scattering radioactive particles all over Palomares, Spain. The United States dug up 1,400 tons of radioactive Spanish dirt and took it to Aiken, South Carolina., where the Savannah River Site has been producing nuclear weapons material, trying to dispose of the waste, and radiating people for over half a century, and where radiation was even recently detected coming all the way from the nuclear disaster in Fukushima, Japan.

This was just after the U.S.S. Ticonderoga sailed from Vietnam to Japan with a nuclear-armed airplane on board and accidentally dropped the plane, complete with nuclear bomb and pilot, to the bottom of the ocean, where they remain.

Then, in 1968, another U.S. B-52 with four nukes on it crashed in Greenland. Three of the bombs exploded, while the fourth has yet to be found. It’s among 11 nuclear bombs the United States admits to having lost over the years. That’s not counting the ones it’s temporarily lost and recovered. In August 2007, a U.S. crew accidentally (or as part of a secret plan; and I’m not sure which is worse) flew six live nuclear bombs from North Dakota to Louisiana and left them sitting there unguarded until the ground crew noticed.

Oh, and if you doubt that these people will arm unmanned drones with nukes just because the drones tend to crash and malfunction, you haven’t yet begun to grasp the sort of madness we’re dealing with.

The really good news is that more and more nations have nuclear weapons, and even more have nuclear power, which puts them close to having nuclear weapons. The thing to remember about every one of these nations, is that they screw up too, through bad luck, stupidity, rage, or madness. Baharul Haq was an Air Vice Marshall in Pakistan involved in security for Kahuta, Pakistan’s main nuclear weapons facility. Later, his son, Faisal Shahzad, claiming the motivation of outrage at U.S. drone killings, tried to blow up a bomb in Times Square, New York. What if Faisal and his father had been on closer terms? Should the fate of New Yorkers really have to depend on such luck?

Nuclear weapons testing on the Marshall Islands produced babies born looking like jelly fish. Nuclear weapons use on Hiroshima and Nagasaki killed like nothing had ever killed before. On October 22, 1964, and again two years later, the U.S. government exploded nuclear bombs underground in Mississippi, and then put up a sign asking people not to dig in the area. Uranium mining of the sort the profiteers now want to reopen in Virginia has spread cancer through every community it’s touched. And the use of depleted uranium weapons has likely contributed to thousands of deaths and birth-defects in the former Yugoslavia, Iraq, and among members of the U.S. military and their families, not to mention the weapons’ producers in places like Jonesborough, Tennessee. The United States has also sold DU weapons to 29 other countries.

What Are You Going to Do About It?

There are three barriers to ridding the world of nuclear weapons. First, our governments don’t represent us and will have to be compelled to act when and if we get our act together.

Second, people imagine we’re safer spreading nukes around the globe by the thousands than we would be eliminating them while a few rogue non-state terrorists hang onto some. This is crazy, of course. An arsenal of nukes doesn’t discourage a terrorist. Nor can it discourage a state any more than can the non-nuclear weapons capable of complete devastation.

Third, people fantasize that there are advantages to nuclear energy that outweigh the problem of its technological vicinity to nuclear weaponry. There are not. Nuclear energy barely reproduces the amount of energy it takes to build and operate the plants; the waste materials cannot be put anywhere safe for 250,000 years; and the inevitable accidents pose such a risk that no private “free-market” insurance company will take it on — only taxpayers’ misrepresentatives in government are willing to pick up the tab. Nuclear energy is how India, Pakistan, Israel, and North Korea got nuclear weapons. It’s also Israel’s and the United States’ excuse for threatening Iran. Uranium radioactive waste is among the horrible things being dumped by the West off the lawless coast of Somalia. The results of such dumping include attacks on Western ships by angry “pirates.” The pirates are generally explained to be hating us for our freedom.

Congressman Dennis Kucinich is hosting a Congressional briefing, Thursday, September 20, 2012, on the medical effects of radiation exposure, and the health threats presented by our nation’s nuclear power plants, nuclear fleet, and the on-going tragedy in Fukushima, Japan. There will be expert testimony from Physicians for Social Responsibility and others. Ask your senators and representative to attend.

The ongoing nuclear disaster in Japan has displaced hundreds of thousands of people. Prior to this disaster, the regulators in Japan said they had all possible safety measures in place. Our Nuclear Regulatory Commission (NRC) has said the same thing about our 104 aging nuclear power plants, 23 of which have the same flawed design as in Fukushima.

Nuclear disasters are not unique to Japan. Chernobyl killed and sickened many, as did Three Mile Island on a smaller scale. A nuclear plant in Virginia was damaged by an earthquake last year.

If you’re in the Washington, D.C., area, the Coalition Against Nukes invites you to a series of events September 20-22, including a Capitol Hill rally, the Congressional briefing, a fundraiser at Busboys and Poets, a ceremony at the Museum of the American Indian, a rally at the Nuclear Regulatory Commission, a film screening, and a strategy session. http://coalitionagainstnukes.org

The nukes have got to go, or we do. This planet’s not big enough for both.

David Swanson’s books include “War Is A Lie.” He blogs at http://davidswanson.org and http://warisacrime.org