Now it is the time of the French to ridicule Mohammad 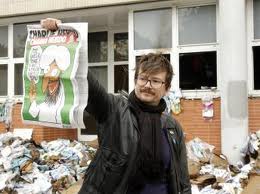 What is going on? Why are factions in western countries systematically provoking Muslims? Initially it started from Salman Rushidie portraying Muhammad’s house as a whore house, providing Khomeini with a golden opportunity. Then the Dutch filmmaker who unfortunately was killed at the hand of a fanatic. Then it was the Pope’s speech depicting Muhammad as violent warmonger. Then the Danish cartoons, linking Muhammad with violence and sexuality. Then it was Koran-burning in Afghanistan, and threat of it by an American priest. Then the recent movie depicting Muhammad as a paedophile and mad womanizer, which no doubt hopes to create a sort of ‘October Surprise’ for Obama. And now these cartoons in France.

Why are they doing this? What do they get out of ridiculing and insulting one of the most populous religions in the world? Why has west sunk so low and become so devoid of ideas that it is only left with nothing but ridicule and insult as ways to define itself, which it celebrates as freedom of expression? If the freedom of expression is so dear, then why is it suppressed when others criticise Israel? There are plenty of stories in the Old Testament that could satisfy the need to insult. Why don’t you dare to scrutinize and question the Holocaust? What happened to freedom of expression when it comes to that? What happened to the country of Dante, Hugo, Sartre and Foucault? Why has it fallen so low? What next?

My last word is to Muslims. Why do you let yourselves to be provoked so easily? You know that all of these provocations have political aims and are used by extremists in the west to put progressive forces on the defensive by depicting all Muslims as intolerant and violent people. Why fall into this trap? You know that in the Koran, God say to the prophet that when you are confronted with vain words, walk away and do not respond? If you used this principle as a method of response, then these right-wing forces in the west could not have achieved their goals. Why not start now? Why not do what Muhammad did? Walk away and ignore them. By doing that you will isolate and expose these fanatical forces in the west, which more and more are gaining the upper hand. Why not?