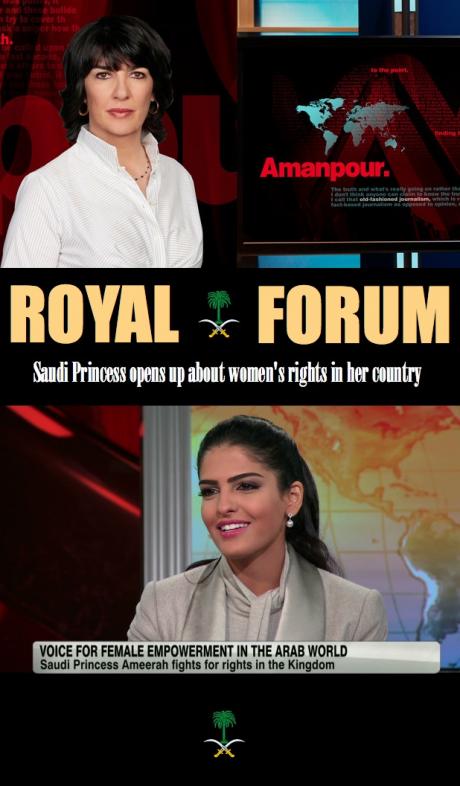 Ameerah al-Taweel is a privileged princess from Saudi Arabia; but she is also on the frontlines of fighting for women’s rights in her country, which is among the most oppressive for women anywhere in the world.(Source: persianrealm.com)

Princess Ameerah, the wife of Prince Alwaleed bin Talal, Chairman of Kingdom Holding Company, travels extensively on behalf of the Alwaleed bin Talal Foundations in an effort to better understand the most pressing challenges facing our world. (MoreHere)

NOT THE ONLY ONE

We speak with an outspoken Saudi princess turned blogger about the Arab uprisings and reform in the Kingdom. (Video Courtesy : Al Jazeera, Jan 23, 2012)

Basma bint Saud was born on 1 March 1964. She is the 115th and youngest of King Saud’s children. Her mother was a Syrian-born woman, Jamila Merhi, who was chosen for her future husband when she visited Mecca on the haj (pilgrimage). Basma was born during the last days of her father’s reign. Her mother took her to the Middle East’s then-most cosmopolitan city, the Lebanese capital of Beirut. When Lebanon’s civil war broke out in 1975, the family fled for Britain. In Beirut, Basma bint Saud attended a French Christian missionary school, taught by nuns. In Britain, she attended a Hertfordshire girls’ school and a College in London, before spending two years studying in Switzerland. In 2003, Basma and her mother moved to Syria. In the same year, Basma studied medicine, psychology and English literature at Beirut Arab University. Princess Basma was married to Shujaa Al Sharif in 1988. They divorced in 2007. She is a single mother with five children, three of whom live with her in Acton. Her children, three daughters and two sons, are Saud, Sara, Samahir, Sohood and Ahmad. Basma bint Saud is a mild advocate of reform. She has been an active participant of different social institutions and human rights organizations. She began to express her views on Arab and international media, writing articles on the hard life conditions of Saudis, particularly of women. However, her criticisms do not directly address the royal family but the Saudi governors and other middle-level administrators. (More Here)

A VOICE FOR CHANGE

Ameerah al-Taweel is a privileged princess from Saudi Arabia; but she is also on the frontlines of fighting for women’s rights in her country, which is among the most oppressive for women anywhere in the world.

Her husband, Prince Alwaleed bin Talal, is one of the richest men in the world and is the nephew of Saudi King Abdullah.

In that Kingdom, a woman can’t travel alone, can’t drive a car and can’t even take a job without the approval of her male guardian.

But the Princess Ameerah is speaking out in ways clerics and conservatives in Saudi Arabia don’t really want to hear.

Ameerah says she’s often asked why women can’t drive in Saudi Arabia, which she believes should be reformed.

She says 57 percent of university graduates are now women.

AMANPOUR  GRATEFUL: «Growing Up In Pahlavi Iran Were The Good Old Days»

Saudi Crown  Prince Nayef, next in line to throne, dies “outside the kingdom”