The Mythical and Magical Art Of Kymia Nawabi 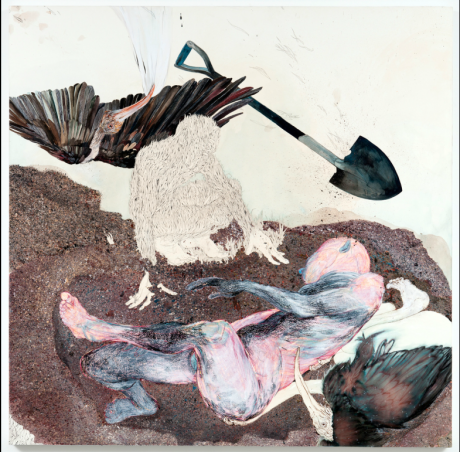 Did you ever watch Work of Art on Bravo? If so, you may recognize Kymia Nawabi‘s name as the Season 2 winner of the show. Her work has a distinctive mark that demands your attention as a viewer: it is full of mythical creatures and objects, the faces of people depicted often lock gazes with you, and each frame or figure has a story that you pause to unravel.  She is currently part of a group show at the Lower East Side Printshop in NYC. The opening reception is September 26th. I learned more about Kymia’s creative process and inspirations–and the unfortunately familiar experience of being “othered” growing up in the US–in this interview.

Tell me about your artwork. What medium(s) do you work with primarily?

By observing the essences, behaviors, and appearances of others and myself, I study the peculiarities of individuals, their relationships to one another and their environments. From this stock of my own wonders concerning our world and its inhabitants, my works portray personifications of our human abject experiences, which embody abnormal physical and psychological states. These abnormalities of existence manifest from the interplay of our selves in our ordinary capacity, versus the occurrences of our daily internal fantasy lives. Fantasy, referring to our mind, soul and body’s intangible, yet real and deep felt phantom world, not sensed by others. These internal phantoms range from our darkest desires and fears, to our uncertainties of time, the fragility of life and what lies beyond this existence. I am fascinated with the mental forms that are conjured up from what we experience within pondering universal phenomena.

Each of my characters and landscapes, as well as their operations, is the representation of these flights of fancies we have as well as the emotional reactions and bodily sensations that occur from having them. It is not where you are or what you are physically doing in the real world that I am interested in, rather where real life places you in your mind’s landscape, who you are and what you are doing there. This is what I am interested in recreating.

Through my allegory of human behavior the viewer is given another realm of reality through my perceptions of what is irrefutable that is often felt but not seen in what we consider the “real world.” Thus, through the lens of my own experiences, obsessions and observations, I direct the viewers’ visions to the complex, deep-level, make-up of who we are, and make us dwell on what we are- the abject human.

With a growing curiosity for spirituality, my most recent works of mixed media drawings and sculpture showcase the beginnings of my research on Alchemy, Greek and Egyptian mythology as well as religions from around the world. I have adopted gods, mythological creatures and burial ceremonies from different cultures as a part of my own belief system.
With these new insights, I have invented a mythology of characters, landscapes and metaphors that symbolize death, the afterlife, rebirth, spirits and souls. Ideas such as the philosopher’s stone, a substance that allows base metal to be turned into gold, and the Ouroboros symbolizing eternal rebirth, for example, all materialize within my allegorical works. In these poignant drawings with life-size characters, I present the viewer with moments of enlightened, transcendental states of our existence, and perhaps what happens to us as we pass on.

Although I am a multi-disciplinary artist, I have such a strong affinity for mixed media drawing. I love to work on large stretches of paper. I am not the best when it comes to technological based tools, such as, photography, working with Photoshop or video. This is not to say that I do not want to get better at any of these mediums. I want to be able to make anything I envision without any limitations based on limited knowledge of materials.

What are some people, places or events that have inspired you as an artist?

How does your identity as someone of Iranian descent influence your artwork?

Being a first generation Iranian-American was not exactly easy growing up in Durham, NC during my younger years. I felt an extreme disjunction socially and environmentally because of being a minority. My sister Kathy and I, both experienced our moments and events of discrimination in school, even in college. For example, a student at a 9-11 memorial at UNC, spit on my sister just because of our Middle Eastern background.

The comments made from time to time, and the difference in the way I looked compared to the majority of my peers ultimately led me to develop a severe depression and social anxiety disorder beginning at eleven years old. I have overcome this disorder for many years now, and, in a sense, being Iranian from my perspective is what I made work about from middle school even up until graduate school. My work is no longer influenced about that chapter in my life.

What projects are you working on now?

I am currently in a residency for one year with the Lower East Side Printshop in the city. Mainly working with the process of collagraph, I am attempting to apply a slight sculptural quality to both the drawing and painting mark making in each piece. The collagraph plate not only allows for me to have the inner contours of the figure to deboss the paper, but the silhouette of each character is embedded in the space as well, adding a delicate sense of depth.

Working cyclically with drawing, painting and sculpture is of the utmost importance to me, as I believe one method and process informs the other.

Keep up with Kymia’s work on her website or on Facebook. You can view some of her older work here.