Now is the time to decide 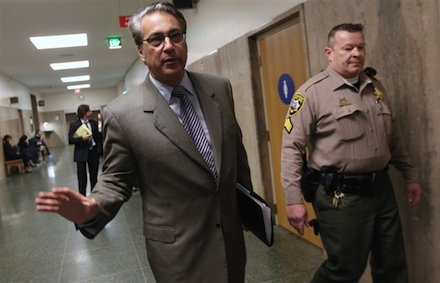 This Coming October 9th, 2012, The fate of the elected Sheriff of San Francisco county hangs in the balance and hands of 9 out of 11 City Supervisors.

Oh, and by the way, the Sheriff is an Iranian-American. Ross Mirkarimi would become the highest elected official in the US if things don’t go horribly wrong.

The strength of the anti-Ross forces are seemingly akin to the very same Deev that served to undermine Rostam, as the ongoing myth of our destiny proceeds. This time in real life, this time here and now, no fond fable.

To reiterate, clarify, and distill it for you, since from my discussions with many in the Iranian community, there is a most certain odor of ignorance to the pure facts:

– Ross was “advised” by his less than astute legal team, to plead guilty to the charge of False Imprisonment. The term was changed from the blocking the door to an irate wife suitcase packed wanting to leave, like in te movies, and somehow mind-numbingly redefined as Ross deciding to turning the car around, when he and his wife got into a Family argument. Deciding that continuing on to a Pizza lunch, wasn’t going to be fun for anyone.

That is the “crime”. Making a U-turn while losing his appetite. He pleaded guilty. Of course. As advised.

The lesson here for all of us, is regardless of what any lawyer might say, if you are not guilty, you DON’T PLEAD GUILTY. Better to go to jail and lose, than to admit guilt. Especially when doing so, can go so horribly wrong. As it has for Ross.

The infamous “bruise” on his wife’s arm, is not even part of any of this scandal. Although it was put on YouTube for all to see and suggest and insinuate.

Again, the bruise, is not the crime. Turning the van around and canceling Pizza is apparently a crime in San Francisco now. Too bad, the Pizza is quite good. Although the parking still sucks.

The bruise, while seemingly a serious matter. In fact isn’t. The reason I know this is it was very small, and the only one. EVER.

And since no one knows, well, I’m sorry, no one knows. Yet another example of brilliant trial by TV though, abrogating you know, that whole Rule of Law crap, and the pesky “Innocent until PROVEN Guilty” garage that always seems to get in the way of a good headline.

So this October 9th, it all comes down to 9 of 11 Supervisors, who hold Ross’ fate in their hands. Some of you might claim this is not Democratic. After all, Ross was elected Sheriff by an overwhelming majority of San Francisco voters. And you might even wonder, what does turning the van around from Pizza, have to do with his ability to go to work every day?

But this is not about that, this is about innuendo and apparently an anti-progressive, pro-conservative city turf and faction war. Just look at the corporate logos on the players’ uniforms.

If you have noticed a more business friendly, screw the poor, let the accountant run the city bent in San Francisco, you are not alone. But you are late. Because it has been happening since Art Agnos left office. A city that auctions off it’s historic world leading successful progressivism, purely to keep Twitter happy, a free service no one needs, but apparently everyone wants, is certainly doomed to a fickle non-self-sustaining short sighted and even shorter future.

For whatever will we do when at the first drop in revenue from those display ads everyone ignores, Twitter decides to hire the attractively lower waged Lakota and pack up their “free zone” move to South Dakota?

I know of all the people I could hire in the world with glorious long dark hair, I would certainly rather hire the Lakota over all of them. If only because they are due.

So, starting now, get out your moral compasses and start to chart your courses. Along the way, make sure to pick up the clues and evidence you need, to decide whether or not you can man-up and do the right thing and support Ross, and redeem every Iranian-American’s political aspiration, that rides on him getting his job back.

Or continue to do what we sadly more than always do, and once again, this time here and now, sit on the sidelines wringing our hands, shaking our heads, and notch notching furtively as we watch our fate disappear into the ravenous mouths of cheating Deev-ious injustice.

We have until then to enflame, enrage, and express ourselves. There are many ways you can do this.

The first step is easy.