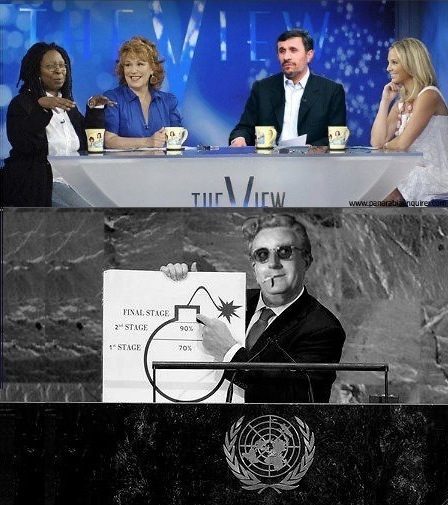 How I learned to stop worrying and love the bomb …

General “Buck” Turgidson: Doctor, you mentioned the ratio of ten women to each man. Now, wouldn’t that necessitate the abandonment of the so-called monogamous sexual relationship, I mean, as far as men were concerned?

Dr. Strangelove: Regrettably, yes. But it is, you know, a sacrifice required for the future of the human race. I hasten to add that since each man will be required to do prodigious… service along these lines, the women will have to be selected for their sexual characteristics which will have to be of a highly stimulating nature.

Ambassador de Sadesky: I must confess, you have an astonishingly good idea there, Doctor.


General Jack D. Ripper: Mandrake, do you recall what Clemenceau once said about war?

Group Capt. Lionel Mandrake: No, I don’t think I do, sir, no.

General Jack D. Ripper: He said war was too important to be left to the generals. When he said that, 50 years ago, he might have been right. But today, war is too important to be left to politicians. They have neither the time, the training, nor the inclination for strategic thought. I can no longer sit back and allow Communist infiltration, Communist indoctrination, Communist subversion and the international Communist conspiracy to sap and impurify all of our precious bodily fluids.

BETTER OFF MUTE: Mitt Romney as  ”The Artist” on The Chris Matthews Show ;0)