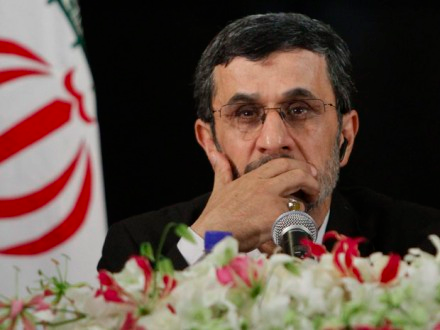 Iran’s economy is in shock. Over the past week, the country’s currency, the rial, has lost half its value, and nobody knows whether the government can stop the downward spiral anytime soon. On Wednesday, Tehran’s traditional bazaar shut down, and authorities from the police and the Revolutionary Guard (IRGC) arrested a group of merchants and businessmen who had gathered in the marketplace. An eyewitness told The Daily Beast that near Ferdowsi Square, where most of Tehran’s foreign exchange shops operate, anti-riot police had established a widespread presence and that Tehran’s commercial area had assumed the appearance of a military zone.

Analysts inside and outside Iran are debating whether the government’s economic policies are to fault for the currency crisis, or whether it’s a sign that the U.S.’s crippling sanctions are finally starting to be felt on the ground. But almost all agree that the rial’s depreciation spells very bad news for the country’s embattled president Mahmoud Ahmadinejad.

On Sept. 4, Ahmadinejad had dismissed speculation that the country’s currency was in deep trouble. When asked whether the rial would reach an exchange rate of 30,000 to the dollar, the president called such predictions “psychological warfare.” Now, just four weeks later, the rate has jumped to 35,000 rials to the dollar, and a Tehrani business owner reports that the exchange market has nearly shut down, with no one willing to sell off dollars for the quickly depreciating rials.

“Whether the worsening economy is the result of sanctions or the interference of the regime’s corrupt elements in the market, people blame the government for mismanaging the economy,” a journalist in Tehran told The Daily Beast, under condition of anonymity. “We are losing hope. Prices change from morning to evening. The inflation is unbearable and Ahmadinejad still does not acknowledge that we are in deep trouble.”

A businessman who runs a food products distribution company in Tehran said that he has stopped selling goods this week, telling his employees to go home. “It’s all loss if I sell anything today, as the money I get might have half the value next week,” he said.

So far, Iranians’ frustration over the plummeting exchange rate seems to be directed squarely at Ahmadinejad’s government. “If you listen carefully to the slogans people are chanting, they’re so far mostly economic in nature, not political, and their frustration is directed toward their own government, not the U.S. or international sanctions,” says Karim Sadjadpour, a senior associate and Iran analyst at the Carnegie Endowment. “Iranians are disunited about what kind of a political system they want, but they’re united in wanting greater economic dignity.”

The rial’s freefall has intensified the power struggle between Ahmadinejad and Iran’s members of Parliament, who see the president’s failed policies as the main reason for the economic chaos.
Iran

On Oct. 2, Ali Larijani, the speaker of Iran’s Parliament, said that 80 percent of the country’s problems are management related and 20 percent of them are related to sanctions. He took a jab at Ahmadinejad’s management, stating, “a Robin Hood economy never works.” His comment was directed at Ahmadinejad’s subsidy-distribution policies during the president’s second term in office, in which government subsidies have been paid to citizens directly—a policy many economic analysts opposed, warning against runaway inflation. According to various reports, Iran’s inflation rate is somewhere above 30 percent (the official number is 19 percent).

Responding to Larijani’s remarks, Ahmadinejad hinted that if the sanctions were not to blame for the currency crisis, then perhaps Parliament’s policies were to blame. He then pointed out Iran’s problems in selling its oil and the Iranian Central Bank’s transaction limitations resulting from sanctions. Ahmadinejad also said that the country’s oil exports have fallen, but that “God willing, we will catch up.”

The same day, at a controversial press conference, Ahmadinejad accused 22 unnamed people of being responsible for the overwhelming turbulence in Iran’s foreign currency market and asked the Intelligence Ministry to confront them.

Analysts say multiple factors are playing into the rial’s precipitous plunge in value. “In the course of the past seven years, the government had kept the value of the currency artificially low by drawing upon its petro-dollars,” says Dariush Zahedi, the director of the University of California, Berkeley’s Program on Entrepreneurship and Democracy in the Middle East. “The imposition of crippling financial and oil sanctions, however, has substantially cut into the government’s revenues.”