The Holy Empress will save Iran 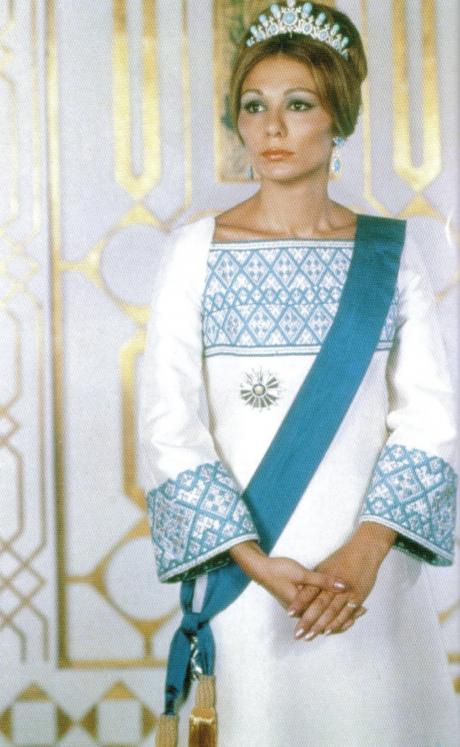 Ask anyone in the world, about the plight of the Iranian women, and they will sigh in grief. Then show them the picture of our Empress from 1970s, and we will all (especially the men) have tears.

What did we have?
What did we lose?
But more importantly, what do we have?

The Women Entourage
As I have mentioned before, we have The Royal Institution of Iran. You all think, as men do, that it was all Shah. You are all mad. It was all The Empress. She and the women entourage were the real cultural backbone of Iran. She and other women, were the human backbone of Iran. The link above is an astrological analysis and it is pertinent to include it. Saturn is there. The Empress has suffered more than most of us, both on a professional, and personal basis. But this is the important point, she has endured. All Iranian women, especially Communists and Islamist women, feel for her. They are women. They are more human than men. When His Imperial Majesty died, it totally disorientated the organizational structure of Iranian leaders at that time. The people in the Royal Household had gone, and the whole cultural entourage was lost. Humanity was lost.

Why did Iran sink?
Because it was left to the Iranian men. It is left to the Iranian men at the moment. We Iranian men, and I am being seriously honest, are a bunch of ego-centric, disagreable bunch of losers. It takes a lot for women to disagree. It takes nothing at all for men to disagree. So in 1979, we had all these rudderless men, at loggerheads with each other. You had all these various political parties, which were made by men, disagreeing all the time. And they still do. In fact there was one, and there is one, led by Maryam Rajavi. We all know the MEK. Look at its success. She had her own humanity.

Women collaborate. Men don’t.
Look at the mess we are in. Too sareh mardhayeh Irani bekhoreh! Yes I swear, but after thirty years, we Iranian men have done jack shit. But the women do get along, and will unite Iran. In an ideal world, I would want a conference of Iranian women in exile. Yes, The Empress (the culture), and Mrs Rajavi (the politician), and many many more, starting with my old British School school class mate Christianne Amanpour (the correspondent). And of course you can have many other smarter women. It will be a proper human conference.

Men shall Shut Up
Men should watch how Iranian women from across all ages religions political thought, whateva, will get along. Yes they will get along. They will organize and lead. I am always inspired by the great Artemis who like Herodotus was born in Persia (in present day Turkey). If there was any victory against the Greeks at sea, it was from an Iranian women, who advised correctly to the Emperor, who ignored her, but she still endured and was successful. And this is what the Iranian women are going through now. Putting up with inhuman Iranian men..

Watch this video and learn:

The religious men are the worst.
Look at the moslem variety. Or look at the radical left wing man. Not going to mention any names, but do you think the wife of Mossadegh would have acted like Mossadegh? I bet you The Empress would have had no trouble having a humane conversation with her, and not allow their men destroy Iran. Do you think that the Ayatollahs’ wife was a mad as him? Do you think the women in Qom would not be able to collaborate with the women in the diaspora if Iran was on the verge of war?

The Holy Roots for Women to Rule
In ancient Iranian philosophy as enshrined in the Zend Avesta the principles are there.

“May a good ruler, man or woman, rule over us in both the (mental and physical) existences.”