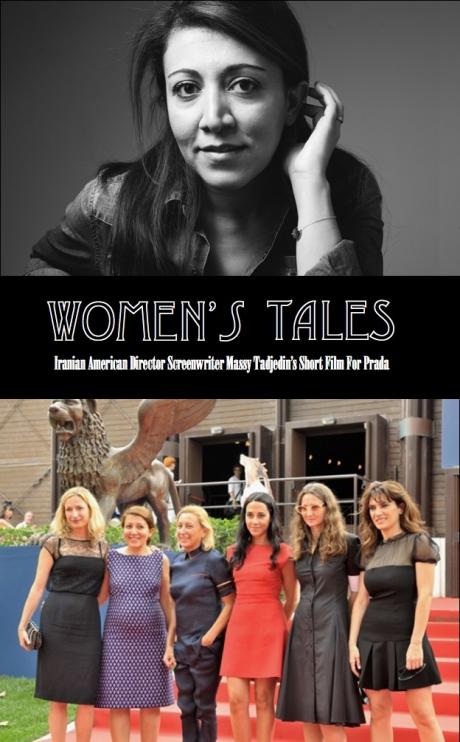 Miu Miu’s acclaimed series of short films, the Women’s Tales, was screened together for the first time as part of the Venice Film Festival’s Venice Days program. (More Here)

The short films, by four leading international female directors, show how the Miu Miu short film platform has managed to combine credible filmmaking themes and a strong feminine point of view with fashion.  The four films in the series are: The Powder Room, directed by Zoe Cassavetes; Muta, directed by Lucrecia Martel; The Woman Dress, directed by Giada Colagrande and It’s Getting Late, directed by Massy Tadjedin, which made its premiere at the festival.

In the translucent LA dusk we discover four women living very different lives. The camera follows each as they wind down their working days, their four stories weaving together as each prepares for their evening.

“We make our faces, our suits, our selves just a little more ready for wherever it is we’re going. Fashion is never just the clothes. It’s our mood, our excitement for something, our expectations, our attitudes, our outlooks. Managing those is often what getting ready is all about and that’s what our short tries to capture.” Massy Tadjedin

The four women quietly take part in their private acts of preparation, but the transformation is also psychological, as they take stock of the day and mentally prepare for the evening ahead.

It’s Getting Late is the fourth film in Miu Miu’s series of short films, the Women’s Tales, by leading female directors, Zoe Cassavetes, Lucrecia Martel and Giada Colagrande. Each film explores the feminine love affair with Miu Miu through the lens of their diverse sensibilities.

Tadjedin was born in Tehran and grew up in Orange County,California, and studied English Literature at Harvard.

Her current project, Le Voyeur, has recently been picked up by Columbia Pictures for Will Smith and James Lassiter to produce through their Sony-based Overbrook Entertainment.

The film, based on a 1955 French novel by Alain Robbe-Grillet, centers on a man who returns to the Caribbean island of his youth and becomes a suspect in the murder of a teenage girl that was committed two days after his arrival. The movie is set for release in 2009. Also for 2010is Last Night, which will starKeira Knightley and Eva Mendes, and will serve as Massy’s directorial debut.

Other current projects as screenplay writer and producer are The Case Study (a political ensemble thriller) and Lady Gold (a drama with director Mel Gibson, distributed byIcon Entertainment International and Paramount Pictures).She is married toDr.Babak Fardin, (See Photo) an ophthalmologist in Orange County.

The couple met at Harvard.