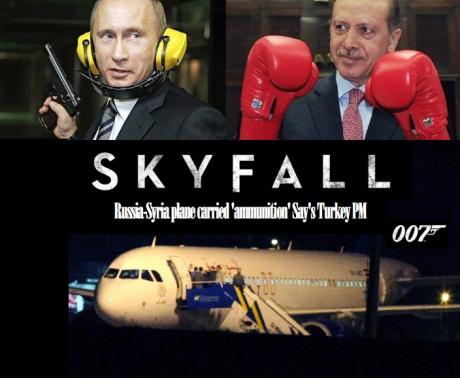 “Passenger aircraft cannot carry ammunition and defence equipment,” Mr Erdogan said, adding, “unfortunately there was such equipment on board”.

Turkish jets forced the plane, coming from Moscow, to land in Ankara.

Syria and Russia have denied the plane was carrying illegal cargo.

They have accused Turkey of putting lives in danger.

The Syrian Air Airbus A320, with about 30 passengers on board, was intercepted on Wednesday evening by two Turkish fighters and escorted to the capital’s Esenboga airport.

Turkey said previously it had received an intelligence tip-off that it had illegal cargo on board.

Speaking to reporters in Ankara, Mr Erdogan said: “This was equipment and ammunition that was being sent from a Russian agency… to the Syrian Defence Ministry.”

“Their examination is continuing and the necessary will follow,” he added.

He said the supplier was the equivalent of Turkey’s state-run arms supplier, the Mechanical and Chemical Industry Corporation.

Russia’s state arms export agency Rosoboronexport had earlier said it had no information about the plane’s cargo and denied it had any connection with the flight or anything on board.

The aircraft was allowed to take off at 02:30 (23:30 GMT on Wednesday), after several hours on the ground, but Syria and Russia have reacted angrily to the incident.

They said Turkey put the passengers and crew in danger by using military aircraft to force it to land.

Turkey has already imposed an arms embargo on Syria, and Foreign Minister Ahmet Davutoglu said it was determined to stop any transfer of weapons to Syria through its airspace.

The foreign ministry said there was “no basis” for safety concerns and that “all measures were taken to ensure the safety of all passengers and to cater to their possible needs”.

Since the uprising against Syria President Bashar al-Assad began last year, Russia has repeatedly refused to abandon its support for Damascus, while Turkey has been a vocal critic of the Assad government.

The BBC’s James Reynolds, near the Syrian border in southern Turkey, says that despite taking opposite views, Ankara and Moscow have maintained a close relationship and continued to do business together.

This incident could be the biggest test of their ties since the conflict broke out, he adds.

Tensions were already high between Turkey and Syria, following the deaths of five Turkish civilians by shelling from across the border last week.

Turkey has returned fire, and on Wednesday its top military commander warned Ankara would respond with greater force if the shelling continued.

In another sign of deteriorating relations, Turkish officials revealed on Thursday that Syria had stopped buying electricity from its neighbour last week.

PUTIN’s TAJIK BROMANCE: Russia gets  30-year extension for military base in Tajikistan

PUTIN’s TAJIK BROMANCE: Russia gets 30-year extension for military base in Tajikistan

Vladimir Putin: «According to some studies Zoroastrianism was born on Russian Territory»

HISTORY FORUM: Turkey and the  Armenian Genocide – ‘The Betrayed’ (BBC Documentary)

PrevPreviousVisiting The Crocodiles
NextOn the Sanctions Against Iran: Reflections from a Child of the Iran-Iraq WarNext