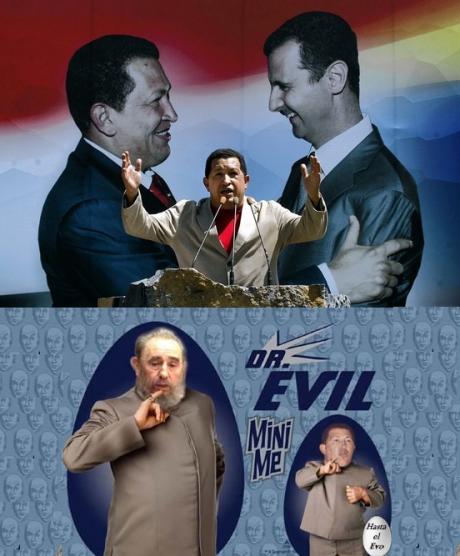 Venezuelan President Hugo Chavez said Tuesday that he will keep supporting Syria’s leader and called for the U.S. to rethink its stance toward the war-shattered nation.(Source: persianrealm.com)

Hugo Still The Boss: Chavez re-elected for another term ( Oct 8, 2012 by ‪RussiaToday):

Venezuelan President Hugo Chavez said Tuesday that he will keep supporting Syria’s leader and called for the U.S. to rethink its stance toward the war-shattered nation.

Mr. Chavez likened the violence in Syria to the fighting in Libya that preceded last year’s ouster and killing of Moammar Gadhafi, who was also a Chavez ally.

The Venezuelan leader said he thinks the conflict in Syria has been provoked by Syrian leader Bashar al-Assad’s enemies abroad to try to topple him.

“The government of the United States is one of those most responsible for this disaster,” Mr. Chavez said at a news conference, calling for President Barack Obama to take a different tack.

Mr. Chavez has been a vocal defender of Mr. al-Assad, and Venezuelan officials have said the state oil company has sent three shipments of diesel fuel to aid Syria.

“How can we not support the government of Bashar al-Assad if it’s the legitimate government of Syria?” Mr. Chavez said. He called the rebels who are fighting Mr. al-Assad’s government “terrorists.”

Activists have estimated the death toll has surpassed 32,000 during nearly 19 months of violence in Syria.

Mr. Chavez said he would like to help ease the crisis in Syria but added: “What can a country like Venezuela do?”

MASADA: Will The Battle For Aleppo Decide The Fate Of Assad ?

SCHINDLER’s LIST : In Tribute to the Abandoned Children of Syria