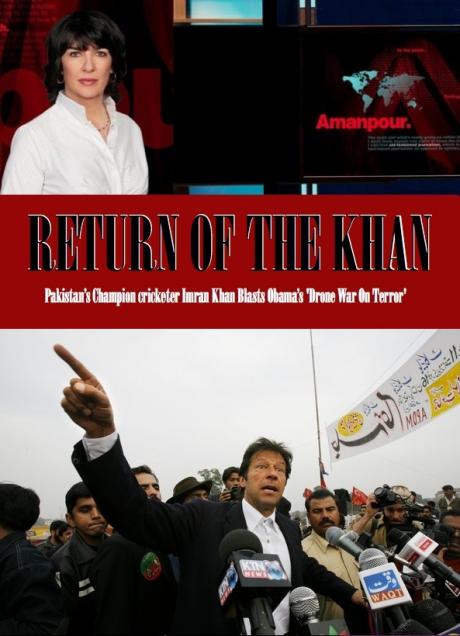 RETURN OF THE KHAN

Khan – a former cricket legend and therefore Pakistani icon – has transformed himself into a populist leader. He is aiming to be the next prime minister of Pakistan – one of the most dysfunctional countries in the world, and a nuclear power at that.

Over the summer Khan surprised Pakistan and the world by drawing crowds of more than 200,000 followers to his political rallies.

Pakistani observers say it’s the first time in forty years that a relatively new national party has come on the scene and shaken things up so dramatically.

Khan says membership in his Tehreek-e-Insaf party has crossed 10 million.

“But the party isn’t even in the government – though Khan believes this fact will help endear him to the Pakistani electorate.”

“They have seen all the parties and they are riddled with corruption and have failed to provide governance,” Khan told CNN’s Christiane Amanpour Tuesday.

“People will vote for change and change is my party.” Khan seemed genuine when he assuredly said, “We’ll sweep the election.”

But Khan says his party will not join in a coalition.

“Coalition means that you will have to compromise with the status quo. We are the anti-status quo party. We cannot bring change by compromising with one of the parties which is part of the status quo in power. So we will fight alone.”

The U.S. and drones

Drones – President Obama’s key weapon in the U.S. war against terrorists – are what draw crowds to Khan’s cause. Recent U.S. studies say constantly hovering drones are terrorizing the Pakistani population, and have resulted in an alarming number of civilians being killed.

“The drones are counterproductive,” Khan told Amanpour. You don’t kill your way to peace. The years of war in Afghanistan, Asia and Pakistan, what has it achieved? It’s time to give peace a chance.”

Khan said that inside Pakistan, drones add to the perception that the Pakistani army is a “hired gun” of the U.S., causing militants target the Pakistan army. So his first point of business would be to ask the U.S. to cease drone attacks.

“There’s an unending chain of violence going on,” Khan said. If he could change this perception, Khan said, it would strength the Pakistani military and allows them to fight terrorism on their own terms. As a result, Khan believes the tribal people would take back control over their land from the Taliban. He optimistically said it would take just a matter of months.

Khan and the Taliban

Critics accuse Khan of being naïve. They say he’s too soft on the Pakistani Taliban and too cozy with the Pakistani military and its notorious security service.

He believes his strength is in understanding the tribal areas, where he believes it is least effective to send in the military and drones.

“The only way to win this war is win the hearts and minds of the people in tribal areas,” Khan said. “The British were stuck there for 80 years. They didn’t win. For 80 years they had military operations. Right up until 1947 – when we got our independence – there were British soldiers dying there.”

Khan said that he wants whoever can stop the war on terror to win the U.S. presidential elections in November.

“I want an anti-war president. I’ve prayed for Obama because I wanted Obama to stop this insanity called the war on terror.”

Who are the  Taliban? (bbc)

AMANPOUR GRATEFUL: «Growing Up In Pahlavi Iran Were The Good Old Days»