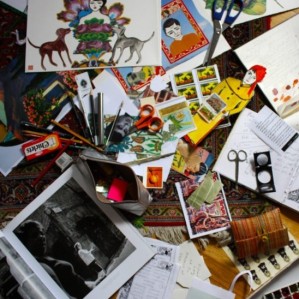 On a typically wet and dreary day in London, I arrived, umbrella in hand, at the doorstep of Afsoon’s Ladbroke Grove studio, and rang the buzzer. Seconds later, I was greeted by a grinning woman with mid-length jet black hair, a red neckerchief, psychedelic Doc Martens, and a quaint, super-cool jumper which read Ginsberg is God on the front, and somewhat less reverently, Goddard is Dog on the flipside.

Like her outfit, Afsoon’s studio, nay – atelier – is something of magic and wonder. Though bare and somewhat industrial in its appearance, and possessing the unassuming exterior of a residential flat, the place is anything but dull. Aside from her signature colourful collages splayed out on the floor for the consideration of yours truly, I was struck by the myriad oddities and eccentricities that had turned a corner of her studio into some sort of fantastic shrine. Among faded family photographs, I could discern colourful cassette covers from pre-Revolution Iran, a retro Egyptian film poster, various wrappings from India, and icons of Hindu gods. Indeed, there was so much to stare and ogle at on her desk alone, that I found it extremely difficult to focus on what she was saying at times.

That day, Afsoon gave me nothing short of the royal treatment, as she showed me works from an assortment of her collections, explaining the stories and motivations behind each in meticulous detail. For instance, I had always taken her Fairytale Icons series at face value, simply admiring them for their aesthetic beauty, and of course, the popular figures featured within, not recognising a host of details that made the pieces even more interesting. In one collage, a resplendent Queen Fawzieh dominates the foreground, with small cut-outs of the late Shah surrounding her on both sides, giving her wings, as it would seem. As Afsoon pointed out, the reason for this arrangement relates to the personalities of the Shah and Fawzieh. Whereas Fawzieh was a seasoned Queen, having a father, brother, and husband who were all kings, the young Shah was a newcomer, and thus played second fiddle to his wife, who was the real ‘star’ of the show, fluttering around her. In another collage featuring the late Iranian Prime Minister Mossadegh, Afsoon points out rows of sugar containers in the background, noting that ‘Old Mossy’s’ first squabble with the British was over the right to produce sugar locally, rather than have it imported from Britain. It was only later, I learned, that the feud over the nationalisation of the Iranian oil industry ensued.

Afsoon’s icons have been received extremely well, particularly among Iranian – and oddly enough – Arab audiences. However, even though a good number of them are sold out, they’re not exactly what you would call ‘commercial’ pieces, and her newer series display even less of a mainstream tendency. In her Persian Expressions series, Afsoon presents a number of colourful collages, each representing a popular Persian proverb, saying, or idiom. While, like her icons, they are incredibly pretty and attractive in their use of colours, shapes, and minimalism, there’s something much deeper to be appreciated in them. As Afsoon mentioned, many of the sayings she grew up with as a child are no longer known by not only today’s generation of Iranians – a different breed altogether, we both agreed – but also those of her own. Therefore, through these works (which she hopes to compile in a forthcoming book), Afsoon hopes to play her role in preserving her country’s rich culture and heritage, of which sayings – and language, in general – play a huge, pivotal role. Truly, it is perhaps through the sayings, idioms, and folk wisdom of a nation that one can best understand the soul and psyche of its inhabitants – and Afsoon knows this well.

Today, Afsoon has become somewhat of a household name in the contemporary Middle Eastern art world, having participated in numerous exhibitions and auctions around the world. Interestingly enough, at the time of my visit, one of the pieces from her Persian Expressions series was on display at the British Museum, for an exhibition entitled The Horse: From Arabia to Royal Ascot. The work, which illustrated the Persian proverb Asb-e pishkesh dandooneshro nemishemorand (lit. You don’t count the teeth of the gift horse), was one of the mere two contemporary works shown in the entire exhibition – no small feat whatsoever. However, despite her status as an artist today, Afsoon’s story – like her personality – is not exactly ‘standard’. Afsoon is a self-taught artist, and she’s proud of that. After she married and had children, who soon went off to school, Afsoon decided to busy herself by taking printmaking lessons and pursuing art, which she had no formal training in. Gradually, she began making her signature prints, gaining critical acclaim and commercial success along the way. The rest, of course, is history.

Afsoon’s latest series, like her Persian Expressions series, reflect more of a personal journey than a desire for commercial success. Aptly entitled Once a Traveller, Always a Traveller, the works – which are all unfinished – will feature photographs of miscellaneous objects gathered and arranged by Afsoon, with messages underneath them. Featuring odds and sods from her native Iran, Morocco, and elsewhere around the globe, the works are a fitting paean to wanderlust and the yearning of the human spirit for adventure and exploration. While Sindbad may have expressed remorse and disgust after each of his seven fantastical journeys, vowing never to set out to sea again, Afsoon only seems thirsty for more, nonchalantly displaying through her grin an air of je ne regrette rien.

With Afsoon khanum, it’s all about positivity, and it’s quite hard to get the blues in her presence, even on the dullest of London days. ‘We all need more colour’, I’ve heard her remark many times – and nothing could be closer to the truth. Thank you, Afsoon, for celebrating Iran’s most beloved icons, for preserving her cultural heritage, for bringing out the constant traveller in all of us, and of course, adding some much-needed colour to our lives. For non-Persian speaking readers, it’s worth mentioning that the word Afsoon in Persian translates (roughly) to sorcery or bewitchment. Indeed, if I ever did meet a sorceress (Afsoongar), it was Afsoon khanum.