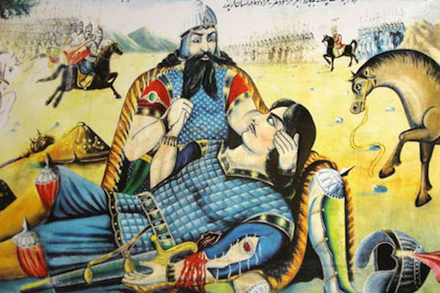 Coffee-House Painting is a form of Narrative Painting and Painting Recitation which originated in Iran during late Qajar era. The themes of such paintings are usually epic or religious. Comparing to European style painting, this style lacks sophistication in the development of its figures.

Here, the painting depicts the tragedy of the legendary Persian hero named Rustam and his son Sohrab, which is taken from Ferdowsi’s book, Shahnameh.
Rostam is a Persian hero and one of the favorites of King Kaykaus. Once, following the traces of his lost horse, he enters the kingdom of Samangan where he becomes the guest of the king during the search for his horse. There Rostam meets princess Tahmina and marries her. However, he soon leaves the kingdom never to come bachim Sohrab. Rostam and Sohrab never meet until a new war between Iran and Turan started many years later.