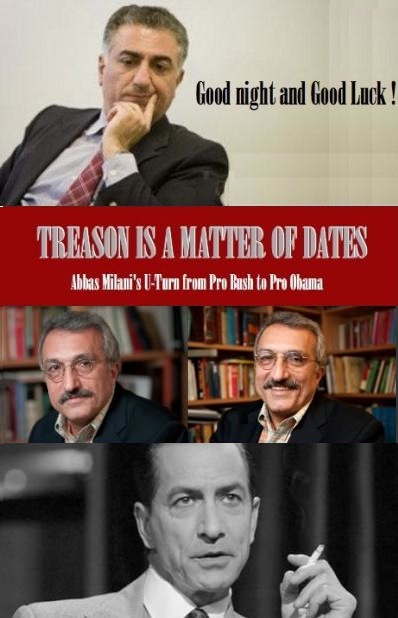 “The difference between treason and patriotism is only a matter of dates.” ― Charles Maurice de Talleyrand-Périgord

What I admire most about Milani is his steadfastness … ;0)

Milani Blames Romney of changing his opinion all the time and complains that he as a university teacher is a “Moalemeh Faghir” (i.e: Poor Teacher) yet pays more taxes than Romney …

An excerpt from The Iranian Optimist by

In 2006, Milani was invited to a dinner with President Bush at the home of former Secretary of State George Shultz, just down the road from Stanford’s Hoover House. Hadley had asked Milani to write a memo for Bush to read in advance, in which Milani reiterated his position that democracy was achievable in Iran if the United States and its allies refrained from using force against the regime. When Bush met Milani, the president told him to stay after the other guests left. “I want to talk to you one-on-one,” Bush said. Milani and Bush chatted privately for 15 minutes. Bush asked if there were any reliable intermediaries who could negotiate with the mullahs on Washington’s behalf. As they were leaving, Milani told Bush, “You know, you’ve got a lot of popularity in Iran for standing up to these guys.” The president wheeled around and stared at Milani. Then he said, “You’re not bullshitting me, are you?”

Saadabad Palace. Shah Mohammad Reza Pahlavi gives a press conference, after the celebrations for the 2500 years of the Persian monarchy in Persepolis. (Source: persianrealm.com)

Shah Explains What He Means By “The Great Civilization” During Press Conference (1971):

Chinese Communist Party Chairman Hua Kuo Feng arrives in Iran, where he is met by the Shah of Iran, attends a ceremony at Shahyad Tower and later, a formal banquet. (circa,1978) (Source: persianrealm.com)

The Shah of Iran’s Message to the “blue eyed People” :

Shah of Iran tells Mike Wallace that the West Should Wake Up from it’s self complacent Utopia that their well being will be eternally guaranteed.

THE WEST & THE REST: Niall Ferguson on «Colbert Report» warns of America’s decline

TREASON IS A MATTER OF DATES: Constitutionalist Response to a Jomhurykhah Query