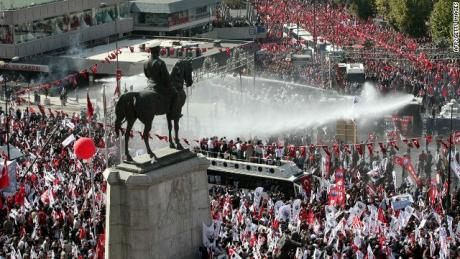 Despite ban, secularists critical of Turkey’s Islamist-rooted government protest in Ankara on a day marking the 89th anniversary of the founding of modern Turkey. (Source: persianrealm.com)

Istanbul (CNN)  — On a day marking the 89th anniversary of the founding of Turkey, a country that has marketed itself as a stable, prosperous and democratic role model for the Muslim world, riot police clashed with defiant opposition groups, firing water cannons at a patriotic rally in the capital.

Tensions mounted ahead of Monday’s Republic Day holiday, when the governor of Ankara banned the planned march organized by secularist opposition groups that are deeply critical of Turkey’s Islamist-rooted government.

Despite the ban, opposition groups defiantly vowed to go ahead with their rally. They were joined by Kemal Kilicdaroglu, the leader of Turkey’s largest opposition party, the Republican People’s Party, or CHP.

Kilicdaroglu boycotted the government’s traditional military parade. Instead, he attended the opposition gathering, just a few minutes’ drive away from the parade grounds in Ankara.

Meanwhile, CHP leader Kilicdaroglu addressed a crowd of several thousand flag-waving supporters next to a statue of Mustafa Kemal Ataturk, the founder of the Turkish Republic.

“They used gas and they used water,” said Alper Kafa, an opposition party activist and general director of the Association of Public Conservatory Graduates, speaking on the phone from Ankara with CNN.

“This is the shameful face or our alleged democracy,” he added. “On the 89th anniversary of our great leader’s foundation of the republic, in the place where he made the declaration, they used gas against the people. It is so very sad.”

“It is shameful to use water cannons and tear gas at crowds which include children and old ladies out there to celebrate the republic,” said Asli Aydintasbas, a columnist with the Turkish daily newspaper Milliyet.

“It shows to me that people come and go, but the fundamentals of the regime in Ankara do not change.”

Since his Justice and Development Party, or AKP, first won parliamentary elections 10 years ago, Prime Minister Erdogan has governed Turkey through an unprecedented decade of economic expansion. Voters have rewarded Erdogan, re-electing his party in national parliamentary and municipal elections.

Erdogan also won a bitter power struggle against the military and Turkey’s traditional secular establishment. Hundreds of generals have been arrested in recent years, accused of plotting to overthrow the government. Until Erdogan’s rise to power, the Turkish military had a stranglehold on Turkish politics, overthrowing at least four civilian governments in the last half-century.

But Erdogan has come under growing criticism from human rights and freedom of expression groups for his increasingly authoritarian policies.

This month, the New York-based Committee to Protect Journalists published a report slamming Turkey, accusing it of being the world’s worst jailers of journalists.

The Turkish newspaper Taraf also announced it is suing Turkey’s national intelligence agency. The revelation emerged after Taraf’s editors reportedly found court documents proving they were being wiretapped by the agency, whose main mission is to target foreign spies and terrorism threats.

Last week, Turkey’s justice minister made a public appeal for more than 600 Kurdish prisoners to end a hunger strike that has spread through prisons across the country over the last month and a half.

A long-simmering Kurdish insurgency continues to claim lives in the predominantly Kurdish southeastern part of the country. Turkey’s semiofficial Anatolia news agency reported that at least one police officer was killed by fighters from the Kurdistan Workers Party, or PKK, in southeastern Turkey on Saturday.

“It is also a disgrace for Turkey to publicly applaud the Arab Spring,” columnist Aydintasbas said, “and at home to ban even a small innocent rally. … To think that any rally is essentially a hidden effort to overthrow the government, which is the paranoia in Ankara right now, points to an autocratic mindset.”

HISTORY FORUM: Turkey and the  Armenian Genocide – ‘The Betrayed’ (BBC Documentary)