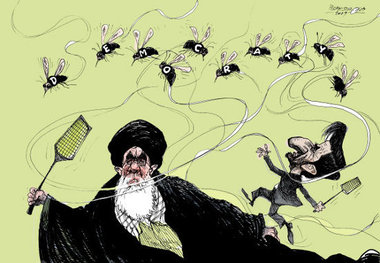 After a harrowing three-day hearing at the Peace Palace in The Hague, the Iran Tribunal delivered its interim judgement on October 27th. According to the tribunal, which has no legal standing, the Islamic Republic of Iran committed crimes against humanity and gross violations of human rights against its citizens during “the bloody decade” of 1980s.

Democratic Islamic Republic is a biggest lie; Democracy is intrinsically not Islamic or Christian; Democracy is democracy! Dignity of man ”I have rights as a man – when you take my rights away you take my humanity away!!” Dissent and freedom of expression are source of democracy, a nation that denies both denies democracy. Iran can be rightly termed as the cradle of civilization and of being a “Lawgiver”; it has a rich tradition of culture and diversity of thinking.

No prophet can claim the institution of dignity emanating from the source of his scriptures! Hence no Republic founded on ‘any of the holy scriptures’ can claim warrants to enforce human dignity ala Islam or Christianity. Human dignity is free of holy scriptures it is within us. When free expression is denied humanity is denied. Human dignity is not a ‘God bestowed right’ it is an innate right to respect and receive ethical treatment. It is an offshoot of Enlightenment-era concepts of inherent, inalienable rights.

The first ‘Iranian rulers’ were lawgivers and now contrast it to today and one see the 21st century Iran under clergy as the biggest violator of human rights. Cyrus the Great granted that right, and literally figures like Rumi and Saadi have structured within the Iranian genre by saying: “The sons of Adam are limbs of one another Having been created of one essence.” “When the calamity of time afflicts one limb, The other limbs cannot remain at rest.”A great commanding and authoritative speech by a global champion of Human Right causes. It is perhaps the tragedy that “deranged ideologically motivated” leadership has wasted the histological traditions of Iran in less than three decades, the richness of thousands of years trampled in few years.

Look at this damning indictment of Khomienism:Islamic Republic of Iran has committed crimes against humanity and gross violations of human rights against its citizens during “the bloody decade” of 1980s. Its post-revolution decline from bastion and cradle of civilization to the lowest rung of civilized nation’s ladder is scandalous and disgusting. To live in peace without coercion is an indispensable human right; terror campaigns violate the sacred trust of “live and let others live” that has been evolved over millenniums.

Law started in Iran in the beginnings of human history, however, this rich inheritance has been wretchedly shattered by the in-attendance clerical tyranny in Tehran. Although it is generally considered that the most ancient code of laws is understood by Western scholars to be the code of Hammurabi, an ancient king of Babylonia, who ruled about 2100 B.C. Babylonia, the first dignitaries to have rendered extraordinary service in framing and codifying laws was Prince Uruvakhshaya, the brother of the eternal idol Krsaspa (Garshasp) and the son of King Thrita, the vicar of medicine. They were the direct ancestry of Yima, the dazzling antediluvian monarch. This unquestionably demonstrates insistence of early Iranian rulers to codify law and provide justice to their subjects.

The other code known to civilisation popularly is the “Justinian code” Roman law that was promulgated by Justinian, the contemporary of Khosrow, the Great of Persia who was more popularly known as Anoshervan. The influences of Anoshervan on edicts of Justinian code are extraordinarily evident. Iran is far too sophisticated for that. But to see the violations in terms of human rights abuses originating from this great country is heartbreaking; particularly, a nation ingrained with the utterances of Cyrus the Great, who 2500 years ago said, “he would not reign over the people if they did not wish it” and declared that he would not force any person to change his religion or faith.

Rediscovery of “political Islam” in Shiite and Sunni worlds has led to the redefinition of our human social contract evolved over thousands of years through a process of survival of the best idea. The legacy of thousands of years’ human richness has been sacrificed on the altar of holy interpretations of how we should administer our life; unfortunately these interpretations are led by the likes of Khomeini. Ideologically provoked “terrorism” has plunged a dagger into the heart of our social contract, that of basic respect of human life. It provides, through its ill-founded medieval judgement and jurisprudence, the “right to kill innocent” without hearing.

With new ideological jurisprudence in practice, we are living in a two-tiered world of justice, one where justice demands evidence before someone is convicted, the other, where convictions are handed by 21st century’s new inquisitors, those who are quick to dispense justice and are able to craft and interpret the worst of atrocities in the name of “moral equivalence and ideological justifications.”