Al Gore’s Inconvenient Truth, “there is a connection between Hurricane Sandy & Global warming.” However is there really one? 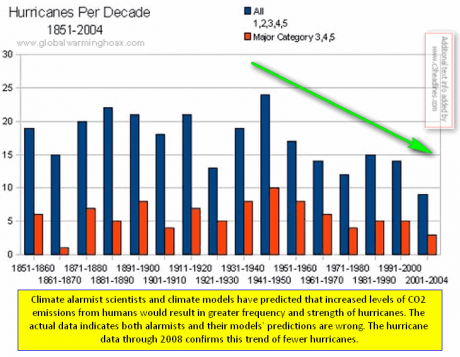 Al Gore today said that ” Hurricane Sandy is a disturbing sign of things to come. We must heed this warning and act quickly to solve the climate crisis. Dirty energy makes dirty weather.”

Once again Mr. Al Gore captures the front line, ”This is global warming”, screaming on the front pages above an frighteningly ominous graphic of Hurricane Sandy projected path and final landfall. Each time a storm comes along, a deluge, a famine, a chill, a heat wave; the query is raised “is it linked to global warming?” Few decades ago, that was not the case, now that global weather is effectively established in the civic mind and an active item on the political agenda. Is the ferocity of Sandy really the result of global warming? Do we have evidence that the rising concentrations of carbon dioxide and other greenhouse gases in the atmosphere are changing weather systems in such a way that hurricanes become more potent, or more recurrent? Political Hype aside the chart on the right does not show a connection with rising global temperatures and number of Hurricanes.

Mr, Al Gore has quite questionable record when it comes to global warming and An Inconvenient Truth, the High Court of London in 2008 ruled in a case by Steward Dimmock under Section 406(1)(b) of the Education Act 1996, accepting plaintiff claim that the movie is a form of political indoctrination that  in order to show this movie to the children teachers must make clear that the film is a political work and promotes only one side of the argument. If teachers present the film without making this plain they may be in breach of section 406 of the Education Act 1996 and guilty of political indoctrination. Nine inaccuracies have to be specifically drawn to the attention of school children.

An Inconvenient Truth, Nine inaccuracies are:

The film claims that melting snows on Mount Kilimanjaro evidence global warming. The Government’s expert conceded that this was not correct.

The film suggests that evidence from ice cores proves that rising CO2 causes temperature increases over 650,000 years. The Court found that ‘the film was misleading: over that period the rises in CO2 lagged behind the temperature rises by 800-2000 years.’

The film uses emotive images of Hurricane Katrina and suggests that this has been caused by global warming. The Government’s expert accepted that it was “not possible” to attribute one-off events to global warming.

The film shows the drying up of Lake Chad and claims that this was caused by global warming. The Government’s expert had to withdraw the claim.

The film shows that a study depicts that polar bears had drowned due to disappearing arctic ice. Mr Gore had misread the study: in fact four polar bears drowned and this was because of a particularly violent storm.

The film threatens that global warming could stop the Gulf Stream throwing Europe into an ice age: the counter evidence was produced that this was a scientific impossibility.

The film blames global warming for species losses including coral reef bleaching. The Government expert could find no evidence to support the claim.

The film suggests that sea levels could rise by 7m causing the displacement of millions of people. In fact the evidence is that sea levels are expected to rise by about 40cm over the next hundred years and that there is no such threat of massive migration.

The film claims that rising sea levels has caused the evacuation of certain Pacific islands to New Zealand. The Government expert was unable to substantiate this and the Court observed that this appears to be a false claim.

It’s very premature to describe Sandy as a result of a global warming phenomenon. The record since 1800 is not suggestive of that. USA have always had strong hurricanes. Records from the 20th Century yield that hurricane development over the Atlantic has changed stage every few decades: 1900-50 were active fifty years, the 1950-2000 less so.

A BBC report in 2005 quoted Julian Heming, from the UK Meteorological Office who explained that “Based on current research, the consensus view is that we don’t expect global warming to make a difference to the frequency of hurricanes. Activity is naturally very variable in terms of frequency, intensity and regional occurrence; in the Atlantic, there are active phases and not so active phases, and currently we’re in the middle of an active phase.”

Sandy was a Category 2 hurricane (SSHS) but the crucial factor with Sandy was where it landed in the heart of heavily populated metropolis. Some hurricanes even far stronger than Sandy don’t make it to the land; others hit a low populated area, causing little damage. Global satellite coverage is relatively new, there are gaps in the record; storms would start at sea and die out at sea.

Though all these charts that I have selected are clearly suggestive of the fact that Mr Gore may be over selling and over connecting the link, but still I will give him benefit of doubt and highlight that his favourite vanishing Gulf Stream is in play in case of Hurricanes.The altering phases of Atlantic hurricane action are not entirely implicit; but there appears to be a relationship to fluctuations in the thermohaline flow, the global model of ocean currents which in western Europe appears as the Gulf Stream.

By causing the sea-surface temperature in the tropical Atlantic to change by even a degree Celsius, these fluctuations can bring major differences to the number of hurricanes generated in a particular year. Other ordinary type of weather cycles are also in play such as the El Nino Southern Oscillation and the North Atlantic Oscillation also have a responsibility.

I believe that waste and over consumption is the biggest problem that mankind faces. The best bet that I can suggest for Mr. Gore is to cut consumption of (Dirty energy) hydrocarbons, most regrettably any correction has to start from the USA. How about mass transit systems so that less reliance on cars can be made.

How about if culture of binge overindulgence is legislatively made difficult; but Who Will Bell the Cats? In environmental issues if there is no pain their shall be no gain. Will ‘Al Gore party’ and America collectively ready to bell the cat?

USA as the highest punter of energy and hydrocarbons has the moral burden to legislate a change of approach towards consumption. Only a steep decline of higher energy utilization/capita shall alleviate the suspicious link of Global Weather Patterns and the vanishing Gulf Stream. To start culling consumption from present 26 barrel per capita to a more manageable average levels needs new politics, and fresh thinking! Look at the chart, the sacrifices and eco-efficiency has reduced per/capita consumption but still a lot more has to be done if a Japanese average is the target. Al Gore needs to preach this to his constituency.  Prevention is better than cure. How about cutting hydrocarbon consumptions by 10% in the next five years. The charity should commence from home.