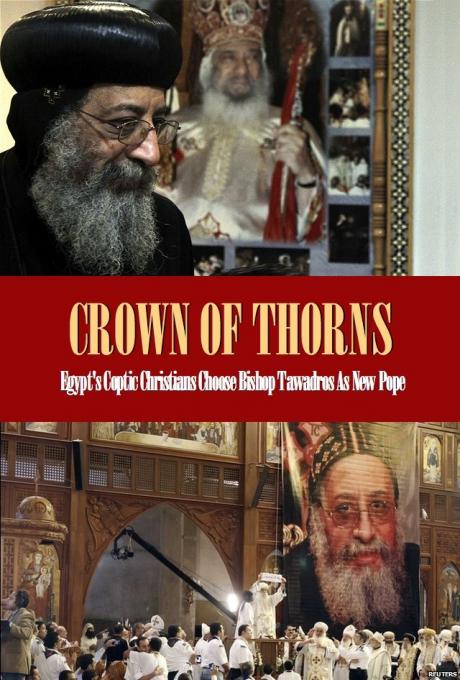 On Sunday, in an ancient ceremony, a blindfolded boy selected the new Pope for Egypt’s minority Coptic Christians. Bishop Tawadros takes over from his charismatic predecessor who died in March, after leading the church for 40 years. But he is facing difficult times ahead. (Source: persianrealm.com)

Bishop Tawadros has been chosen as the new pope of Egypt’s Coptic Christians, becoming the leader of the largest Christian minority in the Middle East.  His name was selected from a bowl by a blindfolded boy at a ceremony in Cairo’s St Mark’s Cathedral. Three candidates had been shortlisted.  The 60-year-old succeeds Pope Shenouda III, who died in March aged 88.

Inside Story – What role can Copts play in a changing Egypt?

It was a remarkable ceremony. The ancient liturgy of morning service at St Mark’s Cathedral in Cairo was the setting for an even more extraordinary ritual.

A young boy was chosen, brought forward to the alter, then blindfolded. He then picked one of three pieces of paper from a jar. The paper was shown to the congregation. On it was the name of Bishop Tawadros, who will be the new Coptic pope. The congregation broke into spontaneous applause.

It might seem a strange way to choose a new leader for Egypt’s eight to ten million Coptic Christians – and many more worldwide.

Yet Copts believe this is the way the hand of God was revealed. That is the view of Youssef Sidhom, editor of the Coptic Watani newspaper:

“We end up presenting three to heaven, and we ask heaven to choose one of them,” he explained.

The new pope is a 60-year-old bishop. He has studied in Britain, and worked in Egypt and abroad. He’s even run a medicine factory, so he is a man of wide experience, and an accomplished administrator.

Yet no-one believes he will bring radical change to this deeply conservative church. One commentator told me the only change introduced to the church in recent years was to bring in chairs, a mercy as services can last four or five hours.

The ancient liturgy is still performed in the Coptic language, little understood by most Egyptians.

After a service at a Cairo church this week, members of the congregation were united in opposing any idea of change.

“This is a traditional church,” said Nader.

Yet the new pope is going to have to deal with a rapidly changing Egypt, and a community nervous of their own role in it.

Pope Shenouda III, who died earlier this year, was a very political pope. He fell out with President Sadat, being forced into internal exile for many years. Later he formed a strong alliance with former President Mubarak, in the belief that this was the best way to protect Christians in Egypt.

Many leading Copts now believe the new pope should play a less overtly political role. Activists such as Michael Munir hope that ordinary Copts can make their voices heard by winning more seats in the now democratically elected parliament.

Yet the new pope may want to make his views known quickly on how prominent a role Islamic, or Sharia, law should play in the new constitution currently under negotiation. He will also need to calm fears that Copts could be squeezed out of government jobs, and even that new sectarian strife could erupt.

After the exhilaration of the revolution Copts are bound to be nervous. Like all Egyptians they are suffering from the poor economic situation. They have seen the Islamists of the Muslim Brotherhood rise to power, with the harder-line Islamists, known as Salafists, pushing for ever more radical measures.

This is also a time of great opportunity for Egypt as well. The country has vast, untapped potential – if the economy, and the education system, can begin to be reformed.

And so far the worst fears of Egypt’s Coptic Christians have not been realised. They will be hoping now that a new pope can lead them to a secure future in the country that is being rebuilt and transformed.

Other related pictory on « Royalty and Faith » :