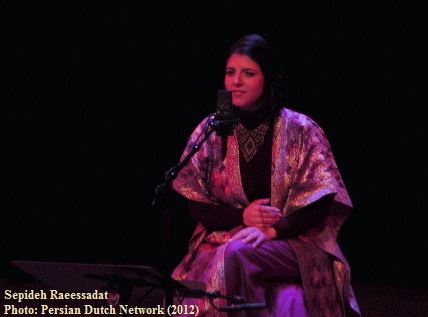 Unfortunately it was one of the last Persian music concerts at Tropentheater, the most active venue of world music in The Netherlands. The activities of the institute will be stopped in mid-2013 following the economic crisis in Europe.

Sepideh Raissadat sang nice and sweet. In a time that women are not allowed to sing in public in Iran, Sepideh is a new female-hope for Persian vocal music. She is pupil of Parissa, one of most celebrated female singers of classical Persian music.

Watch a 2-min. video of Sepideh Raissadat concert in Amsterdam, accompanied by Mezrab Ensemble; she sings “Zemzemeh-haa” [Whispers] by Hamid Motebassem on lyrics by Shafiei Kadkani.