Astrology of Sun in Aban or Scorpio and Moon in Bahman or Aquarius in 2012. 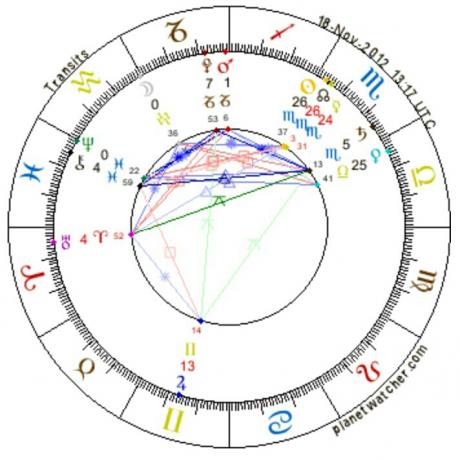 Astrology of Sun in Aban or Scorpio and Moon in Bahman or Aquarius in 2012.

The Moon went from Day or Capricorn to Bahman or Aquarius about an hour or so ago. Day is about society and government and it was just the moment for leadership changes and that is what happened in China. Mars being close to Pluto and Moon all making good angles to the Saturn. But Uranus is there adding a bit of its renegade spice. Iron-clad leadership has been chosen for China but Uranus will shake them up. It is so sad how they have tried to engineer all this. It sorrows me to see rockets made in Chengdu smash into Tel Aviv. Many miss this point.

With Moon in Aquarius we will have good angles to Jupiter and Venus. Bahman is all about distant connections. Bahman will deal with strange connections, progressive thought, and weird interactions. And so why I decided to make a political comment about the role of Chengdu in this recent flare up between Israelis and Palestinians. The roots of the problem is in China and in particular Chengdu.

This long distant form of thinking is just what needs to be done now. It connects the groups of people and the corporate world. As such it forces people to rise above the individual personality and become a humanitarian. Most Aquarians just cannot get along with strong personalities as in Leos or Scorpios. No wonder they are 180 and 90 days apart. And so we need to use this Aquarian moment to rise above conflicts.

In simple terms do social networking and look for distant families you have lost touch with as the Moon is in the Sun’s 4th house. Call that weird uncle of yours. Talk about strange things. Iranian politics is so intermingled with historical absurdities, and this is a good time for all that. Try to bridge the gap that is there because of an individuals personality as opposed to the Good Though or Vohu Mana or Vohuman or Bahman as it is stated in Zend Avesta.

As the Moon makes good angles to Jupiter tomorrow think progressively about the way you find meanings in your life. Read progressive philosophy. Forget conservative thought. Be radical.

In a couple of days the Moon will make good angles to Venus. In the same light be radical in your love. Distant love will work. See someone you like in the distant, smile at them. See someone in the mirror whilst shopping, look again, you might find they will be looking again. Yeah. It works. Have fun.