Hamas, Hezb and Iran are taking due note of ‘Iron Dome’ super success! 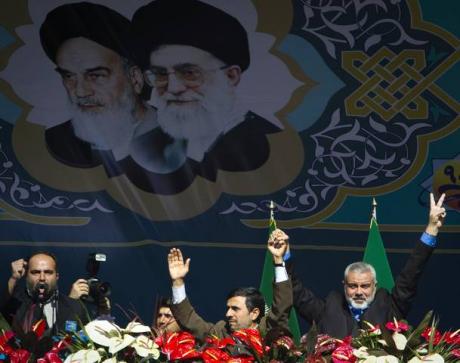 Indiscriminate firing without any regard of target is a tell-tale sign of Hamas or Hezb insensitivity towards strategic realities. One never puts their people in harm’s way without appropriately designing the response to decisive strategic advantage the ‘enemy’ enjoys. Yes of-course children and women need security but from the hands of unscrupulous Hamas. Every war has a heart-rending dimension of ‘moral conscientiousness.’ War today accentuates accountability of civilians safety on the two combatants. War has to be fought with some restraint and realistic assessment of capability. Their has to be honour amongst thieves, this is the best even in the dire situations that we ‘sentient beings’ should show.

One just doesn’t take an enemy who is far advanced, rather weak uses moral weight of human misery to extract concessions that may alleviate burgeoning despair of Gaza. It is most ironically the ‘Hamas missiles’ that are intended for mass murder as they are not targeted to take the strategic targets out. Hamas doesn’t care where the missile goes as far they go into Israel, there is no concept of strategic targeting as the Hamas/Hezb Iranian or local made versions missiles guidance system needs a far-reaching redesign. The targets of Hamas are undefined, even the payloads are taken off as far as the rocket pipe goes a distance and kills someone somewhere. The targets are not even military, every Israeli/Jew or civilian is considered a legitimate target. They also perfectly know that the retaliatory retort will be a misfortune for a very heavily populated Gaza, rather the leadership bury within those heavily populated areas and brazenly use the children and woman as shields.

Al Jabari assassination was carried out after a report by the Shin Bet intelligence service that in the first 10 months of 2012 there was a 43 percent increase in the number of missiles fired at Israel compared to 2011. The plan of the annihilation of Al- Jabari was to force Hamas to request an extended cease-fire. What people rarely know is that nearly ‘12,000’ firecrackers class of missiles have been fired since last 10 years. During the 2006 Second Lebanon War, approximately 4,000 Hezbollah-fired rockets (the great majority of which were short-range Katyusha rockets) landed in northern Israel. To the south, more than 4,000 rockets and 4,000 mortar bombs were fired into Israel from Gaza between 2000 and 2008, principally by Hamas. Almost all of the rockets fired were Qassams launched by 122 mm Grad launchers smuggled into the Gaza Strip.

Most regrettably the murder revenge paranoid led Hamas to launch ‘gates of hell’ but the pain is now felt by their own public. Extended cease fire will in a little while come after a heavy price has been extracted. Ismail Haniyeh, the prime minister of the Hamas government in the Gaza Strip, told Egyptian President Mohammed Morsi over the weekend that he supported the efforts to mediate a temporary cease-fire with Israel. The cease-fire must comprise a clear guarantee from Israel that it would not resume its attacks on Gaza, Haniyeh told Morsi in a telephone conversation. No one really cares as far as these missiles keep going into Israel. If these missiles were any good and could be as effective as Israelis ones are, there would be no Israeli leadership living as the 12,000 of them fired since last ten years would have ruined and annihilated Israel by now.

There is no chance of war, but repercussions of this combative failure will be huge. Disappointment with the exactness and capability of the latest version of Iranian ‘Fajr’ will send shivers down the spines of Hamas and Hezbollah and their Iranian missile makers. The detection, tracking, radar built weapon control, the missile firing and payload; on all these counts the complete technology imploded and is primitive. May be they are good to drive holes through the walls; but not accurate enough to ‘incise the head of their enemies’ as they desired. Israelis have that alternative, they go in with lethal accuracy and take out the leadership. Hamas members claim credit for fictional success and continue the “fighting” while concealed in well equipped tunnels, the residents of the Gaza Strip sorrowfully continue to face the brunt.

‘Israeli Iron Dome’ that knocked incoming missiles has changed the equation of the balance of terror as anticipated by the radicals! Alongside the retaliatory Israeli measures of a classic bulls eyes accurate elimination that takes their leadership out in no time either in a moving car or sleeping in his house has instituted a reversed the fear of terror .

While Hamas leadership hides in the underground tunnels, the civilian population in Gaza takes the brunt of IDF strikes; where is fairness, even-handedness and responsibility towards their people here? Mehsal and Haniyeh after forgoing hundreds of Palestinian children/women/civilians most pitilessly, now have stooped and begged for a honourable cease fire through Arab league. They need to come out of their ‘burrow hole’ asap ‘as the great conquerors of the cause of self annihilation of Palestinian nation.’ Hezbollah conscience and Hamas’s political pragmatism should take lessons from 1948, 1967 and 1973. All wars have only helped in making Israel a bigger and stronger nation and left them to live in squalid conditions. Palestinians and Lebanese do not deserve it. And what does Iran have to do with it? Iran is only using the Palestinians and the Shiites in Southern Lebanon for harbouring their own agenda in the Persian Gulf.

This strategy of war has failed time and again, the present combat and the ‘Iron Dome response ‘ in the last few days of the conflict has opened new dimension to consider for the Palestinian hawks and Iranian strategists. The way Israelis have intercepted their missiles has completely diluted the fear of the ‘Hamas /Hezb blackmail of ‘missiles from the basements’ and even the balance of terror equation is now open to a volte-face, has Iran got the deliverable capacity of Nukes? It looks like no.

‘Iron Dome’ that composes of three parts of Detection & Tracking Radar built by Elta; Battle Management & Weapon Control from mPrest Systems, and the Missile Firing Unit is Tamir interceptor missile built by Rafael has totally altered this wicked inspiration’ of raining fire upon the Jews. The technology as exercised in last few days have undermined the future Palestinian negotiated settlement option, the idea of war through ‘basement bargain missiles from Iran’ is now looks like utter idiocy and self suicide; the Iron Dome has knocked the menace out of the strategic equation.

The ‘Radar’ detects the rocket’s launch and tracks its trajectory; the BMC calculates the likely hit point and uses this information to determine whether the target constitutes a threat; if so it fires an interceptor missile to kills the rocket before it hits the target. On the other hand these missiles of Hamas and Hezbollah are ‘firecrackers’ and not first-rate strategic weapons to be relied on to take on a war. War and peace is a mix of the art of diplomacy and strategy, on both these counts Hamas is self-destructive, they neither can achieve principled parity in war, even evil of war has some honour and rules to follow. Neither are they competent to negotiate a robust and resilient peace that may change the course of Palestinian permanent refugee stigma.

This ‘archaic missile inventory’ was/is/never a deterrent; this is a definite recipe of self annihilation of their own children. This false sense of security that these huge number of ‘worthless farting firecrackers’ offer give Hamas the bravado of using their own children as cannon fodder. They don’t discuss the issue with some logic rather with hostility and antagonism of vengeance. All this warmongering carried on the premises that ” we have a reliable deterrent’ and we can fill body bags to draw the attention of the world. The world is no more interested in their antics of hiding within civilian populations, their war as seen by ‘twitter shows’ how they use their own children even as large as 10 in number to surround themselves to save their own necks.

Hamas fire missiles at Israeli civilians, and it does so from among Gaza’s civilian population. That’s a war crime multiplied. It exposes its own populace to retaliation by default. After firing they disappear but the bombs end up on the civilians. Hamas, operates within civilian population and conceals its arsenals in built-up areas. Hamas missile rocket launchers and their procedure of launching is exceedingly speedy predominantly through remote control. It is not easy to strike, Hamas militants make sure not to hang about above the ground, they stay in the network of tunnels built by Hamas beneath the Gaza Strip. The militants are secure and low risk when compared to the vast majority of the Gaza population. Hamas uses the civilians as hostage and valid cover most effectively and with sanction, therefore damage caused to militants is comparatively low. Hamas rockets are just not adequate otherwise they would/will create a new holocaust. This also goes to prove to the civilised world why these nations should never have a nuke, imagine Hamas powered with an Iranian Nuke? They will go wild and fire those like ‘firecrackers’ in all directions. They have no deference for human life; if they cannot care for their own children how can they care for some ones else?

The reason ‘Oslo’ is dead is because the spirit of Oslo has been substituted by the old ravenous desire to annihilate Israel, this is the cause of the major split between Hamas and Fat-ah factions. The reason there is no home for Palestinians so far is that these inconsiderate Hamas Gaza war insanity and ideological lunacy destroys any consequential statehood dialogue. ‘Two nation state’ as envisaged by Oslo accords is dead in water as a non starter. Out of 5.5 m Palestinians in the West Bank and Gaza, the Gaza 1,5m ruled by Hamas refuse to accept the ‘clause of recognition of Israel’ which is integral to a two state formula as outlined in the Oslo peace accord. Without recognition from Hamas; President Abbas hands have been prematurely cut-off and the whole cause hijacked by the radicals, it is no more a ‘secular freedom cause’ but a new beginning of putting into practice the holy ‘Jihad to death.’ So sad and what a tragedy. Hamas has ‘Islamicised’ Palestinian freedom. George Habbash and Hanan Ashrawi were all marginalized. Faith of Hamas stipulates eradication of unfaithful. Faith is a conversation stopper; it kills peace and promotes violence.

I wrote the following in 2007 and I expect until complete change of ‘hearts and mind’ nothing will change. There was no need of all this bloodshed between the brothers. It is so sad and so grievous! Always there has to be Either a King or a Sheikh or a Clinton to put them brothers to stop being bloodily belligerent towards each other. Sunday, June 17, 2007

”A quick expanse of the hotspots in the Islamic world reveals a very repulsive and distressful drama unfolding very silently and unnoticeably. The 6th of June marked the 40th anniversary of the beginning of the Six Day War according to the civil calendar. So how did the Palestinians acknowledge this significant date? They tore each other apart this time, unable to penetrate through the thick walls, the desire for blood now turns to their own. Of course, this ongoing conflict provides a ready-made excuse for all the problems of Arab societies ranging from the national to the deeply personal. As Egyptian columnist Wael Abdel Fattah wrote in the independent weekly Al-Fagr newspaper that Arabs blame the defeat for “everything” – from “price hikes, dictatorship, religious extremism, sectarian strife, even sexual impotence.”The heavy fighting, pitting forces loyal to Palestinian President Mahmoud Abbas, aka Abu Mazen, against members of the Islamist Hamas movement, have not only revived fears of an intra-Palestinian civil war, but they have shattered the dream of the Palestinians gaining independence and ruling themselves as a sovereign nation at any time in the foreseeable future.”