MURSI … MURSI ME … and You Thought You Could Be Pharaoh Just Like Me ? ;0) 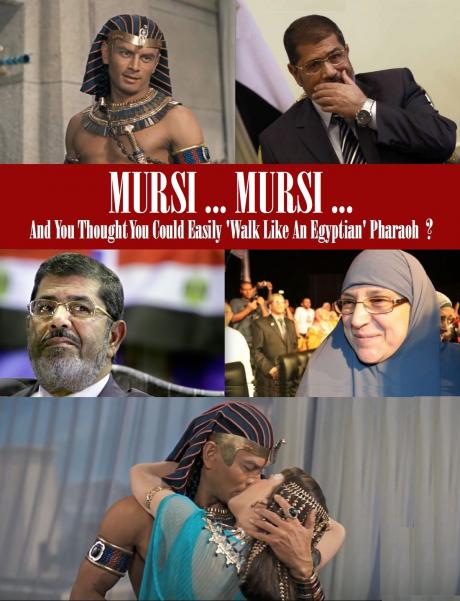 10 things I Hate About the Ten Commandments :

The Muslim Brotherhood, of which President Mursi is a leader, is a cautious organisation. The demonstrations might persuade it to dilute its controversial measures. If that doesn’t happen, then the split in Egypt between political Islamists and the rest will grow deeper and more bitter.

President Mursi argues that he has taken exceptional powers to deal with Egypt’s enormous problems. But the scenes on the streets of Cairo, and Egypt’s other major cities, show that the medicine could be making the disease worse.

The country has had no political or economic stability since President Mubarak fell in February last year. Creating both should be at the top of the agenda for Mr Mursi. Egypt is close to getting a big loan from the International Monetary Fund – but the accusations that he is turning himself into a new Mubarak will worry Western donors.

Mr Mursi was praised as a pragmatist by the Americans after he negotiated the ceasefire between Israel and Hamas. But Egyptians who didn’t vote for him – almost half the people who turned out in June’s election – believe he has taken the new, sweeping powers to ram through an Islamist agenda.

1) All investigations into the killing of protesters or the use of violence against them will be re-conducted; trials of those accused will be re-held

2) All constitutional declarations, laws and decrees made since Mr Mursi assumed power cannot be appealed or cancelled by any individual, or political or governmental body

3) The public prosecutor will be appointed by the president for a fixed term of four years, and must be aged at least 40

6) The president is authorised to take any measures he sees fit in order to preserve the revolution, to preserve national unity or to safeguard national security.

CAMEL SPOTTING: A Good Camel is an Obedient Camel (pictory)