The 1979 Devolution Was The Perfect Fit For Iranians 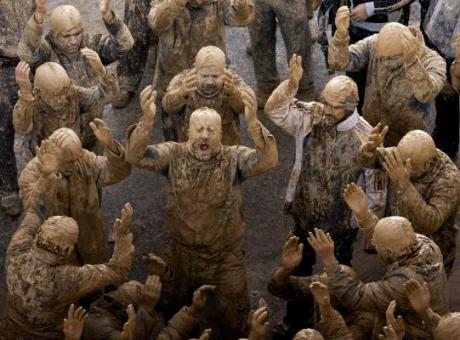 We—I—always fret about how the 1979 devolution destroyed us… and how we wanted freedom and that the Devolution was hijacked, etc.  But if you really think about it, deep down inside—somewhere in the deep, dark recesses of the Iranian collective psyche—the Devolution—and its macabre outcome–were EXACTLY what the Iranian masses were looking for.  The fiasco allowed Iranians to let it all out: it allowed them to exercise, and to put on display, their suppressed, yet ever present cultural absurdities.  Here are a few—yet by no means an exhaustive list—of examples.

1.  Modernity vs. backwards religious fundamentalism: seriously folks, look at the photos at the bottom of this link.  Shah and his wife on the beach, in bathing suits and with their dog?!!! Are you kidding me?  Seriously…do you think that this is image Iranians wanted to see?  Give me a break!  This is what Iranians want to see of their leader and his wife: with the woman wrapped in a sheet and walking five steps behind his man.  A leader in a bathing suit and his wife in a bikini might as well be from planet Mars as far as Iranians are concerned.

2.  Iranians just loooooove anyone in a turban who spews Arabic verses and makes them cry.  It’s a fact. We have twelve official dead ones and thousands of little dead ones one whom we spend billions each year, and in return, we ask them to provide us with everything from a cure to paralysis to a better sex life.  So, it’s natural that would pledge allegiance to an actual live version of a turbaned guy who could spew Arabic in his speeches and promise them heaven. Remember: Shah spoke English, the language of the imperialists, Zionists, capitalists, etc.  So, it was just natural for Iranians to hate him.

.  They’re bitter about losing their empire and all that glory, and are very envious of nations who have taken what they believe to be their rightful place in managing the world.  So, the Devolution allowed them an endless, and ever lasting opportunity, to display their feelings in that regard in the form of nonstop “arbadeh keshi” and flag burning.

4.  Iranians looooove attacking embassies and killing diplomatic staff.  Seriously, no other nation in modern history has attacked so many embassies and killed so many embassy staff.  And it didn’t start with the Islamic Republic.  Oh no, it started in the Qajar era, when they attacked the Russian embassy, killed the ambassador and put his head on a stick on a kabab stand.  The poor Shah and his father were the only barriers between Iranians and their natural instinct to attack diplomats.  Then came the IR, which lifted the barrier and made attacking embassies an Iranian national sport

5.  Iranians are deep down anti-Semites, and believe in Jewish conspiracy theories.  Don’t believe me?  Just read some of the blogs on this site and you will see.  The Devolution has made anti-Semitism a cornerstone of its existence and openly advertises it, thereby allowing the masses to follow suit and let that dark secret to also “all hang out.”  Seriously, what do you expect from a culture that instructs you not to touch a Jew (or a Baha’i for that matter) after rain so that you don’t become “najes?”

So please, next time you hear someone say that the 1979 Devolution was “hijacked” and mullahs “took advantage of the people,” tell him/her to go screw himself/herself.  The Devolution and its results fit the Iranian society and culture like a glove!