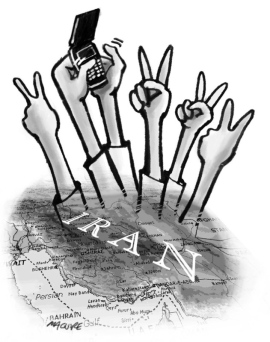 The first thought that past through my mind, in reading that report was, “here is the perfect example, of how the Ayatollahs are taking the hard earned resources of Iran, and putting it to work for the Kings of the Shiites”.

What is seriously ironical, and totally hypocritical, is that the Ayatollahs say that they are against Kings and Emperors. Yet they have a very well documented hereditary system following the death of Halabi Qureshi (aka Mohammad).

There is a dividing line. In the past we had Kings, who thought they were Seyyeds, and so would have it both ways. The Shah showed a lot of divinity towards Shiite Imams. But now after this Ayatollah fiasco, you can’t be both. History will say that if nothing else, the Ayatollahs, were a blessing in disguise. They split Iranians along a very clear dividing line.

Life on the line for Ayatollahs.
These are people who say, “yeah let all the money from oil go to the holiest Shiite shrines in Iraq. They will not care if the money does not go to a hospital in Iran first.

Life on the line for Iran and Ayatollahs
These are people who will go to war with Iraq and save Iran. In the process they became “special” Iranians getting blessing from Ayatollahs. They still put Iran first.

Iranians that hate old leaders
They are the silent young majority. They will avoid all politics and religious discussions. They will love Iranian culture: food, music, art, history, geography. They will scorn at any money going to Iraq for any reason. But they cannot do anything about their belief. They are very literate, and they tweet, facebook, and blog all the time. This Iranian is very smart, but not cohesive or easily led by any sort of an old leader. Old is anyone over 40.

Hodge-Podge
With this sort of a hodge-podge demographics, it is no wonder that the Ayatollahs are siphoning the money to Iraq to build their own Kingdom, so easily. Obviously, once the young generation and its tool sets get totally integrated, the Ayatollahs will be kicked out. It is that simple. In the mean time, we can witness a lot of money being stolen day by day. Ya Ahura!