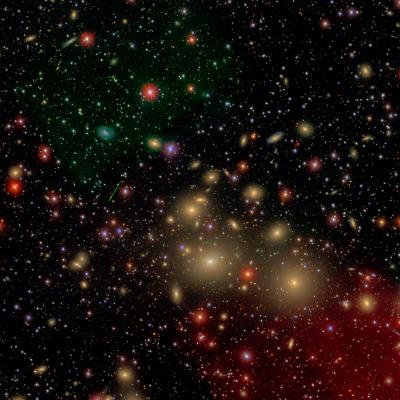 I was stunned when I read the news ‘the Biggest Ever Black Hole Weighs 17 Billion Times More Than the Sun.’ I think that we are pretentiously trying to define ‘infinity’ with our ‘finite minds.’ The ‘weight of 17 Billion Times More Than the Sun’ is an infinite profound numeral. I think our ‘Solar system’ is enormous for us the inhabitants of the planet; but extremely minuscule as a part of the whole Universe, it is someone’s attractive ‘Atom’ hidden within irrelevance of cosmos. We are ‘minions’ but once we recognize that we are ‘insignificant’ yet mindful creatures in a vast infinite universe, we become ‘someone,’ i.e., seekers of knowledge to unravel our greatest mystery – the Universe itself.

This Universe has created us to resolve the mystery of its own construction. For me, as far as the size of our universe is concerned, in comparison to universe, our entire solar system is akin to a ‘single atom’ hidden in the peripheral side of Mount Everest; our earth is an electron and we are riding on this electron with the ‘sun’ as the nucleus. This ‘small single atom’ of a solar system and its sole sentient planetary inhabitants ‘we’ have the audacity to claim ‘ourselves’ at the centre of the universe. Though only a forlorn speck in a forgotten corner of universe.

We the inhabitants of this ‘forlorn planet as small as an electron vis a vis the Universe’ are sentient enough to undertake and seek to crack the code of the whole infinite universe and calculate the distances, may be one day once we are conscious of our inconsequentiality and triviality we will be appreciative that whatsoever we discern is a bonus. We know every spiral galaxy has a super massive black hole at its center, i.e. the point of no return; a region in space where the pull of gravity is so strong that nothing, not even light, can escape. Black holes 17 billion times more massive than our sun may be at the heart of most of the galaxies. Our universe may even exist within a black hole. Scientists have been looking for major questions like What started the big bang? What caused inflation to end? What is the source of the mysterious dark energy that is apparently causing the universe to speed up its expansion?

We deal our ‘atoms’ with atom smashers i.e. LHC and our view of the greater ‘Universe’ around us with Hubble. The idea that our universe is entirely contained within a black hole may provide answer to the questions that bewilder us. Within a black hole ‘General relativity and Quantum mechanics’ blend together, when looking at our atoms we use quantum mechanics when looking at the stars we use general relativity, the smallness and the immensity of universe is only visible through spectrum of waves imperceptible to human eye.

We live in-between two infinities, our efforts to define ‘infinity’ by allotting numbers to sizes small and big so as to unearth missing links of the ‘Grand Unified Theory’ that may unite the minuscule Planks (10 raise to-35 m) to unfathomable Ym (93 billion light years) makes us the most intelligent beings within the known universe so far. We are an atom to someone, our preoccupation with size and defining infinity with numbers is our unique recklessness like this one ‘the Biggest Ever Black Hole Weighs 17 Billion Times More Than the Sun.”

Within these infinite tininess and immensity, we are insignificant small players within a humongous jigsaw puzzle. Nature and the laws of physics work on their own infinite scale. Our known history of 10,000 years and unknown of 100,000 is still less than fraction of a nano- second in terms of nearly infinite time of universe. We will keep defining new numbers and sizes, our obsession and fixation with sizes has no limits, as our super-computers can project huge numbers that makes no sense to human brain. Our inability to subject the popular wisdom of “creation” to the test of reason shall be considered by many of us as blasphemous. Noah existed 6000 years or 13.7 billions years ago; that is a miscalculation that we can live with serenely, but the same obstinacy and inflexibility where freedom of thought is moderated by the Holy Scriptures leads to maniacal display of medievalism by extremists of the world.

One cannot even envisage the horrors in 387 B.C. if Copernicus or Galileo entered the academy and would declare the legitimacy of the heliocentric cosmology. Rubbishing earth as the center of universe would have been considered as heretical and blasphemous in the sacrosanct environ of the academy, as it was by the clergy of Rome, nearly 2000 years later. Italian philosopher Galileo Galilei was one of the supreme figures of contemporary science. His rank as a “saint” of the modern world hinges on his discrimination by the Catholic Church for boldly championing the Copernican theory that the earth revolved around the sun, in contradiction to scripture, church tradition and the ancient authority of Aristotle and Ptolemy.

It looks as if destiny has its own time scale. The overthrow of man from the central role of the keeper of the universe was not an easy acceptance by saviors of mankind. Copernicus and Galileo were not entirely correct, that it was the Sun instead at the centre of the Universe and the stars being some bright heavenly bodies of an unknown nature. It was only ‘partial truth.’

The truth remained concealed by the fate from the curious minds of philosophers in the multilayered shrouds of ambiguity. It was as if waiting for the genius of Bruno. Giordano Bruno is known as ‘The Forgotten Philosopher’ who predicted ‘ Infinite Galaxies, Infinite Life.’ He claimed that the sun was only one star among the many thousands, and therefore, like the sun, many other stars also have planets around them and living beings inhabiting them.” By the time Bruno was burned at the stake as a heretic in 1600 on Rome’s Campo dei Fiori for his provocative ideas about the infinity of the universe the Inquisition, condemned him to death in Rome as part of a yearlong jubilee. Giordano Bruno is one of the enormous figures of renaissance Europe. He is an intellectual peer of the greatest thinkers, a thinker whose dream of the world foreshadowed ours.

When science becomes a “cult,” persecution follows. The Pythagoreans who followed the teachings of Pythagoras believed that science was meant only for the chosen few and that commoners should have nothing to do with it. Philosophers can be cruel too; sometimes when reason failed, persecution took over the better part of judgement. Inquisitions and burning at stake was not just a sacred preoccupation, even Pythagoras to his eternal shame sentenced Hippasus to death by drowning. Socrates was forced to drink hemlock. His peers thought he was misleading the youth because he was trying to free the minds of men. 2000 years later, Bruno was burned at the stake for declaring that the universe has billions of suns; the changes of truth do not change the bestiality of man. What one believes is guarded with coercive use of power. Till today, medieval societies use guns to silence opposition. Whenever rational logic and reason fails, persecution will survive. Therefore our real prophets are those who encourage free thinking based on reason and logic where even minor digressions and omissions like, “earth being the centre of the universe”, should be overlooked because they reflect the higher consciousness of man and represent freedom over orthodoxy and bigotry.

We should not worry about smaller threats. Anything within human control can be addressed, but something that will wipe us out might not even realize; it will be far beyond human imagination and scope – implosion of the centre of the earth; solar movements around the centre of the galaxy where we come across new territories or new threats – the very reason we can think of the unthinkable is a luxury that Aristotle or Plato could not. For their vastness of minds “earth was the centre of the universe.” Very geocentric approach but very fertile to seed the future course of mankind. They did not even know the expanse of the universe. For them, stars were like “twinkle twinkle little star;” as they would have gazed them, they would sing this rhyme without much questioning from their peers on the intellect of such a banal nursery construction. Neither are the stars little nor do they twinkle, as we know. They are suns.

We have deciphered knowledge to extended boundaries of fiction. Science fiction is actually our evolutionary fiction. Nothing has been left for future which is improbable, if we can think of ‘cellular transportation of bodies’ through space by ‘beaming up or beaming down’ not much is left to achieve for advanced sciences. What we can think is probably what we can achieve. A cave man could not envision a flying machine he could not build one, Leonardo de Vinci thought of one we build it within four centuries of that vision. We gaze into the heart of the far away galaxies as Columbus would stand on the shores of Atlantic and try to carve a path through the ocean onto India. The story of human achievements still remains untold, millions of years from now these Hubble’s of ours will be precursors of the ships that will relate to spell bound children of humans in the heart of the far away galaxies the inadequacies of their ancestors minds.