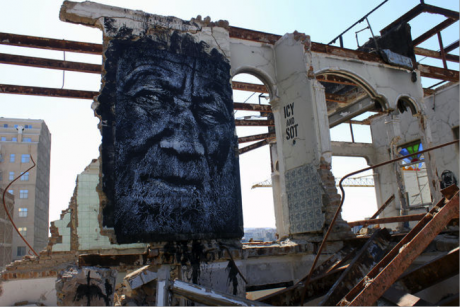 On the eve of Iran’s 1979 Revolution, the Iranian public sphere was transformed into places where information could be exchanged verbally, textually, and visually. The walls came alive with opinions and the chants of the masses. After revolutionary forces under Ayatollah Khomeini triumphed and became institutionalized, these same walls became the space for the dissemination of new revolutionary values. This co-optation, however, meant silencing other views from finding space on the walls. Despite this, since the late 1980′s Iranian street art culture has emerged again and has refused to be silenced. Today, Tehran’s walls are the site of competition between the messages of government murals, graffiti artists, Green movement political activists, and pro-government Basiji groups.

During the 1970’s, a sizable percentage of the Iranian population was illiterate. Printed literature were of little use to the masses of urban poor, thus increasing the role of visual and audible revolutionary sources. Ideologues soon realized the power of pictorial imagery and dramatically delivered anti-Pahlavi sentiment. Since then, Iranians from all walks of life have been bombarded with revolutionary slogans, themes, and motifs represented by images. The public square and open street have served as living canvases for artists– whether state-sanctioned or independent– to express emotion and ideas through the art of persuasion.

Since the 1960’s, visual street art in North America and Europe has traditionally been associated with youth, counter culture, and bohemianism. However in the Iranian case, the revolution and subsequent events led to the eventual domination and co-optation of the public sphere by the state, and thus was utilized by the government to display aspects of the ideological grand-narrative of the Islamic Republic. While the city was not entirely devoid of independently produced visual art, the most visible forms of graphic representation were articulated by the powers-that-be to instill the populace with mobilizing conviction. The most apparent expressions of this tactic were produced during the Iran-Iraq War, where buildings and walls were covered with the faces of Iranian youth who lost their lives in the 8-year-long bloodshed.

As Iran entered the Reconstruction Era following the 1988 cease-fire, the murals of the dead were no longer necessary to boost wartime morale, but served as commemorative reminders of sacrifice. By the 2000s, however, many Iranians had put the dark years of the war behind them and tended view art produced during the Iran-Iraq War as necrophilic, so a beautification project was conceived to convert many of these war-time murals into something more benign, while still within the IRI ideological mindset.

While Iranian street art has been overwhelmingly dominated by state-sanctioned artists with the intention of indoctrinating the masses, the last decade has seen the rise of independent street artists with no connection to the state. Artists such as Icy and Sot, GhalamDAR, and A1one, have connected traditional Iranian visual culture with the motifs of global street art popularized by Banksy and others. Additionally, these rising artists do not only provide an aesthetic backdrop to the concrete edifices of urban Iran, but talk back to power and use graphic means to address issues concerning Iranian society. Rather than being only a language of politics, Public street art is entering Iran’s cultural vernacular through engagement rather than propagation.

for the entire article (which includes examples of Iranian grafitti), please visit: