The Building Of Iranian Americans’ Identity In Diaspora

It seems uncharacteristic for Iranians to reveal much about their personal life, let alone write a memoir, because of modesty and running the risk of exposing their private life to public scrutiny. However, this does not seem to be a serious concern for some Iranians who have immigrated to the U.S., especially after the advent of the Islamic Republic in Iran. Numerous autobiographies have been written by Iranian Americans as well as Iranians living in Europe, most of them by women who left Iran primarily to escape what they considered the unbearable restrictions imposed on them by the Islamic Republic government. In a recently published book entitled Constructing Identity in Iranian-American Self-Narrative, the author, Maria D.Wagenknecht, has chosen 13 of these autobiographies as the main sources of her deeply researched analyses in her effort to examine a number of issues related to the migration of Iranian intellectuals in the aftermath of the Islamic Revolution. Only two of these books are written by men—I have the honor of being one of them—and the rest are written by women. In their memoirs, these women have told unbelievable stories about the unjust treatment of women and voiced their concerns regarding human rights abuse in Iran. They have presented intriguing accounts of their upbringing back home, the 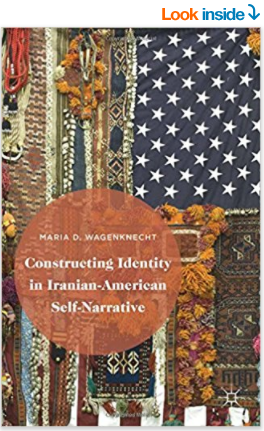 memories of their childhood, and the ordeals they endured after revaluation. Their narratives have become especially appealing to the American audience because only bicultural people can tell such interesting stories.

Many of these autobiographers who departed Iran after the revolution try to explain why they left behind their native country, family, relatives, and friends in an attempt to deal with their resulting sense of guilt and the allegations of disloyalty directed toward them. For female autobiographers, oppressive treatment, imposition of so-called Islamic dress codes, inequality under the Islamic judicial system, and the subjugation to the whimsical man-made rules and regulations of the government have played a decisive role in their decision to leave Iran. Claiming to have been victimized by the regime has been an especially popular justification for these authors who believe they were treated unjustly under the strict rules of the Islamic government. Their narratives are particularly enticing to human rights activists who use them to press for their cause as well as the American audience at large who has had the luxury of enjoying equality and freedom under the law and often take such privileges for granted.

Despite all the adversities, many of these authors have tried to construct an identity in their new country nurtured basically by their Iranian culture. While many want to pretend that they have not ethnically changed, they have not been able to resist the inevitable infiltration of the attractive American pop culture into their lives and the temptation to indulge in the Western lifestyle. No matter how steadfastly some of these women have tried to preserve their authentic identity, many have eventually succumbed to and have had no choice but to assimilate into the culture of their new country and, occasionally, some have undergone acculturation. After all, they must protect themselves from being the targets of stereotyping and prejudicial treatment by blending in.

Historically, Islam has been considered to be a pivotal element of the identity of Iranians living in Iran or abroad. This seems, however, to be less the case for those who reside in America or in Europe, notably after revaluation. Unwilling to put up with disparaging treatment, they have tried to leave their homeland instead of submitting to strict Islamic ruling. They don’t want to identify with something that they have run away from to begin with. They have especially resisted adaptation and have guarded against the intrusion of Islamic traditions into their new life by clinging to Iranian traditions and culture namely, their distinct Persian heritage and its historical riches such as the Persian Empire, Shahnameh, Persian names, the Zoroastrian religion, and Iranian food and music. These have been revered as the core values for Iranians in diaspora. Most Iranian American women, for example, have chosen not to preserve Islamic dress code by refusing to wear the Hijab, deemed as the most outward indication of being a Muslim woman in America. They see no point, or any spiritual value, in complying with something that they do not agree with and is forced on them by others.

Occasionally, I will see a Muslim woman wearing tight jeans and curve-revealing dress along with the fancy and colorful veil that is often decorated with ornaments, implicitly proclaiming the compulsory nature of the Hijab that she was pressured into wearing by peers or parents.

Seeking a non-religious nexus to bond Iranian Americans together, these authors strive to distance themselves from extreme Islam that seems so detested in the U.S. Most of these authors are not hesitant to reveal their dislike of Islam as a component of their new identity. They have tried to promote the image of Iranians by invoking their own pre-Islamic values and the glorious, distant past as the beacon of their new collective identity in America. This is very fathomable given the widespread negative publicity, backlash, and mistrust, as well as the fact that almost all of the atrocities and the terrorist attacks against the U.S. and the West are carried out under the name of Islam or have been masterminded by fanatic Muslims.

While the influence of their native language, Farsi, on Iranian Americans’ identity must not be overlooked, their success obviously chiefly depends upon, among other things, their mastery of the English language and social and communication skills. This is evidenced by the fact that most of them, especially those who came to America before the Islamic Revolution (myself included), have truly relied upon education as the most promising means to their success in America. However, their offspring, who are born in the U.S., may not experience the same difficulties their parents did as first-generation immigrants who wrestled with issues germane to bilingualism.

Realistically, bilingualism is not an obstacle; rather, it is a life-enhancing amenity. Its positive influence on the works of Iranian American autobiographers is evident from the style and the grammatical structure of their writings, especially when they try to add additional intellectual savor to their writings by offering a dose of Farsi expressions or proverbs unique to their Farsi language and their native literature. These authors have told stories that only non-native Americans can duly articulate. What is undeniable is that both languages contribute to the success of these authors—English as an indispensable tool, especially for social and economic success, and Farsi as the channel through which they can connect to their ancestral linage and their cherished memories. Farsi is the language that helps them to tell their emotional stories and present their rich poetry. Many of the stories the Iranian American authors tell are intercultural and are designed to highlight the differences in perceptions, values, judgments, priorities, humor, rites of passages, and the way people live in different countries. Bilingualism, among other things, has led to a hybrid identity for immigrants.

Undoubtedly, we Iranian Americans embrace the heterogeneity of the new environment we chose to live in; we strive to emulate the good traits of both our native culture and our host country’s culture to build a strong, reflective, dual identity. The Iranian autobiographers have done a superb job of storytelling, bringing into public purview the critical issues that people in Iran grapple with and exposing the tyrannical nature of the theocratic government in Muslim countries in general and in Iran in particular. Their writings reveal to the world the kind of mockery the gloomy ruling Mullahs have made of Islam, the religion that the Mullahs try to idolize.

Empirical data show that Iranian Americas are a unique and very successful minority group in America, career wise, financially, and otherwise. Many of them may still struggle to build an identity, to seek their place in this great nation, and to establish their deserving niche in American society. The fact that, unlike some other minority groups, they don’t have heavy accents or any distinct physical characteristics that make them readily recognizable makes blending in easier for them while they may refuse to be fully acculturated.

Iranian families are traditionally reserved and close-knit. Although writing a memoir seems to blur the line between private life, which is closely guarded in Iran, and public life, nonetheless, some first-generation Iranians in the United States have used the freedom of expression and the intellectual resources available to them to put their private life on public display by writing a memoir. Many writers have utilized this as an opportunity to expose injustice, human rights abuse, prejudicial treatment, the absurdity of religious decrees, and other issues through the vehicles of storytelling, actual or fictionalized narratives, recreated memories, or talking about their family, friends, and colleagues. The main concern of these authors is to construct an identity that they want to be recognized by and associated with, not the one crafted by the media or the one perceived by the ill-informed public. They want their country to be known for what it was known for before the revolution like the Persian Empire, its ancient civilization, its hand-crafted rugs, its tapestries, its hospitable people, and so much more, not half-true stories propagated by the lopsided media.